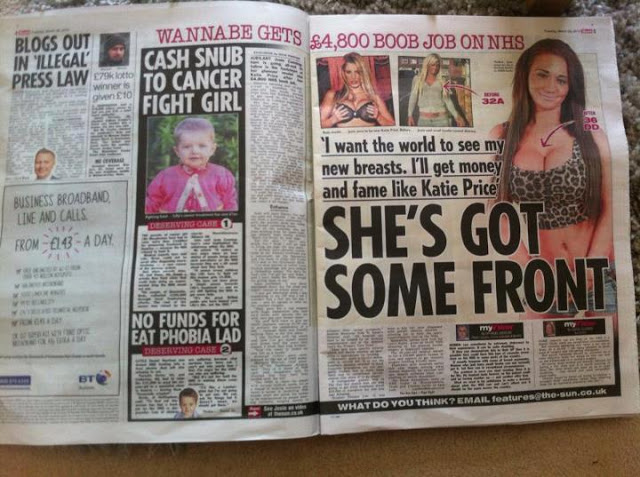 So, yesterday, the Sun ran a story about a 22-year-old woman who recently received a £4,800 boob job on the NHS. It was tastefully placed directly opposite a story on the NHS refusing to fund experimental treatment for a 3-year-old cancer patient, weirdly dubbed “cancer girl” by the newspaper. It was also charmingly titled “She’s Got Some Front”. Har har, good one, Sun, I see what you did there.
A photograph of the newspaper stories immediately went viral, collecting well over 20,000 shares and 3,076 comments. And man, people are pissed off at this woman. I didn’t read all of the comments, because I’m a pretty important girl and have lots of shit to do (that was a lie, it’s just that there’s only so much misogyny that my delicate little lady-stomach can handle), but here’s just a few of the things that wannabe glamour model Josie was called in the comment thread: a “selfish cow”, a “sluttt”, a “tramp thinking of herself when some child has to die”, a “bitch” whose parents are “clearly not doen a good job”, a “slag”, having “a face like a fat mans crack” (somewhat predictably, this one was from a man with a face like a fat man’s crack), “bone idel” and “discusting”. It is also suggested that she should have given the money to the little girl for her cancer treatment, because that’s totally how NHS funding works.
Let’s get a couple of things straight here. Well, there’s really only one thing to get straight, and that’s that this is bullshit. But there are subsections of this bullshittery, so I shall elaborate. Firstly, these are two entirely, totally incomparable cases. On one hand we have a girl whose lack of breast tissue was damaging her confidence to the point that she couldn’t go out without a padded bra on. She went to her GP to talk about her issues, and he recommended her for the surgery. The operation cost just shy of £5,000 and took Josie from a 32A to a 36DD. On the other hand, we have the incredibly tragic story of a three-year-old girl diagnosed with a very rare cancer that NHS doctors believed to be incurable. When her parents found a New York clinic willing to provide an experimental treatment, the NHS refused to fund it. The price of the treatment is not revealed in the article, but the parents have raised over £1million. I’m not going to discuss whether the NHS was right to refuse this funding, because I don’t know anything about the situation or how successful the treatment is likely to be. But I flatly refuse to sit back and watch people attack a poor, insecure woman as though she single-handedly stole the money straight out of the little girl’s piggy bank. £5000 is a drop in the ocean in comparison with the vast amount of money needed to pay for Lilly’s cancer treatment. I think it’s frankly offensive that the Sun have run these stories side-by-side as though they are somehow related. Josie’s boob job was not the deciding factor on whether Lilly got treatment. If Josie hadn’t gotten her boobs done, the money would have gone on something else.
If you haven’t seen the paper yet, take a wild guess at which of the two stories gets the most coverage. If you guessed that it’s the one illustrated by a fabulously busty young girl being delighted with her new funbags, congratulations! While undoubtedly attempting to turn the reader against Josie by portraying her as a benefit scrounging, child murdering Katie Price wannabe, the Sun just can’t let old habits die hard, and include a raunchy snap of Josie’s new chesticles, a photograph of Katie Price smouldering away, and a selection of quotes describing how happy she is with her new body. Call me a radical, fun-killing feminazi, but I think it’s kind off shitty for the newspaper single handedly perpetuating Page 3 culture to then throw a young woman to the lions for buying into their relentless image-bashing. What would be really fucking great is if the media could stop perpetuating insanely irresponsible beauty standards and encouraging girls to aspire to nothing more than big boobs and column inches. How many girls will have come away from that story with nothing more than “She got a boob job, and is in the newspaper now”.
Girls, if you’re reading this (and really you shouldn’t be, there’s too much S-E-X on this website for you, but if you are), your boobs are great. Really, they are. And I’m speaking as someone who has come to terms with having a chest so flat that you could build an airport on it. Seriously, you do not need boobs the size of your head. When you get old enough, boys will be so happy to be seeing actual boobs in real life that it literally doesn’t matter how big they are.
This isn’t a story about an evil, self-centred woman funnelling money away from a little girl’s cancer treatments. This should be a story about why the size of a young woman’s breasts were so tied to her sense of self-worth that her doctor recommended she get them enlarged. And I don’t think the Sun would have to look to far to find the answer to that one.
I give it a month before she’s on Page 3.
(Editor’s note: To prove our point, by the time this went to press, The Sun had indeed featured ‘Wannabe Josie’ in a topless shoot. You can have a look at it here, if you must.)
- FL

39 thoughts on “The Sun’s Got Some Front”