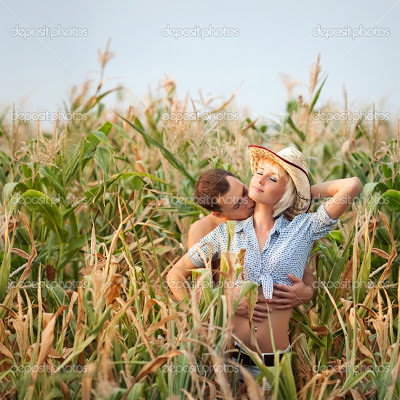 Anyone with half a brain who’s ever seen Mel Gibson’s Signs would never fuck in a cornfield
Sex. It’s a fairly simple transaction whereby two people arrange their various orifices and organs to their mutual satisfaction. Move along not much to see here, right? I mean, we all worked out that there were only about 5 sex positions YEARS ago, indeed, probably sometime in the early nineties about two months after the recently folded more! magazine launched its infamous ‘position of the fortnight’ (RIP more! and I must say, in terms of shoehorning conventional sexual positions into ostensibly new scenarios, you were king. Lest we forget the time you transformed a simple act of fellatio into a ‘beach blowjob’ through the simple addition of deckchairs.) Except, according to Cosmo, the act of copulation is Serious Bizznezz, and if you’re not constantly trying to spice up your shagging through the use of multiple props and scenarios then you ain’t just trying hard enough, sister.
Here are eight new places where US Cosmo thinks you should have sex and where (if you’re me, at least) you definitely, definitely shouldn’t*:
1. A golf course.
Cosmo make the inevitable ‘hole in one’ joke and recommend that you fuck in one of those ‘shedlike structures usually placed in remote areas’. You know, the ones that serial killers always lure their prey to in B-movies starring girls who used to be on One Tree Hill. It’s ok though, because at least you’ll be wearing ‘a cute little golf skirt to allow for easy access’. I hate to break it to you Cosmo, but you will never, ever, get me into a cute little golf skirt, not even if you kidnap me, take me to your offices, and tell me that, unless I put on the aforementioned cute little golf skirt, I will only be allowed to eat edamame beans while writing features about how Miranda Kerr is ‘OK with the occasional burger’.  Hear that? Not. even. then.
2. In front of the fridge
Are you serious Cosmo? I live in ENGLAND. I freeze my tits off most of the time as it is, even when I’m in bed, wearing my fleecy moo cow pyjamas and clutching tightly to a warm naked body while the hot water bottle bulges between us like the pink rubbery pastrami filling in our human sandwich. I don’t even want to imagine what adding a fridge into the mix would do, except distract me into eating all of my flatmate’s rocky road sunday while undergoing cunnilingus. Which, actually, sounds alright.
3. A row boat
Are you fucking kidding me? Weeping over your lovers cold, waxy, lichen covered body as he’s dredged from the bottom of the boating lake because your boat capsized sounds like the worst trip to Regent’s Park ever.
4. The hood of your car
I suppose when done the American way it could be romantic. ‘Spread a blanket on the hood and have an old-school romp under the stars’. If you’re wearing cut off Levis and your chevy is parked near a levy then it’s a movie moment in the making, but if you’re humping on the bonnet of a Ford Mondeo somewhere in the Forest of Dean then it’s just plain old dogging.
5. A farmer’s field
As someone who grew up in the country, take it from me that this is a terrible, terrible idea. Unless, of course, you enjoy being chased by someone called Tecwyn while he red facedly fires a shotgun at you while hollering about how ‘you fucking cunts ruined lambing season’.
6. A sleeping compartment on a train
Your ‘exclusive passion playground’, apparently. Because nothing gets you off more than the sounds of ‘Your Train Manager Martin’ listing every snack available in the buffet car, twice, while the stench of piss emanating from the only toilet caresses your nostrils. There is genuinely nothing more erotic on this planet. Except maybe the sound and smells of two businessmen discussing marketing with one another in loud voices while eating egg sandwiches. Nothing says ‘passion playground’ more than chat about brand strategies. I just came from the mere thought of it.
7. On a hike
Nope, sorry
8. An exercise bench
Again, far too vigorous. What the hell’s wrong with a bit of shallow spooning to Sigur Ros while tears slip slowly down your cheeks at the beauty of it all? Why does it all have to be so…strenuous?
Fun fact: One of the people who wrote the original Cosmo feature has an actual, real-life PhD.
Next week: places where you have to have sex, otherwise you’re not a feminist.
* DISCLAIMER: we’ve been getting a bit of flak recently, especially from magazine journalists who seem to think that we have christened ourselves Dictators Of All Things Feminist Especially People Who Are Allowed To Use the Term Innit. In light of this we’d like to point out that this is a humorously intended article and that if you want to have sex in an abandoned shack on a golf course during a thunderstorm, even while wearing a cute little golf skirt, then that is your prerogative. We hate to have to point this out but because of Twitter twats unfortunately we do. We couldn’t give a toss whether you have sex in a boat or not, frankly, provided you’re not made to feel like you  HAVE TO. Laterz ladybros.