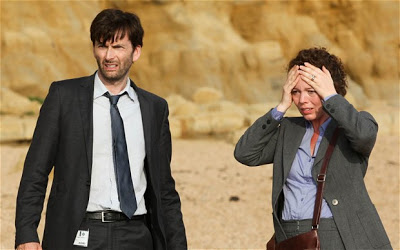 In the small town of Broadchurch lies a deep, dark secret. And no, it’s not that everyone looks way too middle class to be plumbers. Don’t be distracted by the artsy silhouette shots fellow feminists! Whilst Broadchurch may present progressive female characters, they all, much like Colman’s West Country accent, eventually disappear.

Just in case you’ve missed the hype (where have you been bro?) Broadchurch is this new show (obv) about a kid who gets murdered and we don’t know why or by whom so we spend 40 minutes of each episode looking at pretty scenery of the town and 10 minutes thinking it’s the dog, or maybe the baby, or maybe both. It is in many ways a great piece of British drama. It overpowers my prejudice towards ITV and allows me to listen to Tennant say muhrrr duhrrrr at least 5 times an episode. The cinematography is quite stunning, and the characters, despite the fact the all seem to be either a pedophile, possibly a pedophile or related to a pedophile, are all well written and powerfully acted. One of the best parts of Broadchurch is the character Ellie Miller, and not just because she’s played by Olivia Colman. Miller is a unique portrayal of a working mum on contemporary television. Yet whilst the show gives a great female character, the entire plot seems to mock us, the audience, for even considering the possibility of a successful independent mother. ‘A stay at home dad? Pffff. Men aren’t fulfilled by feeding babies yogurt and going to skate parks. Put a man in that position and he’ll probably resort to grooming a child, secretly develop a relationship of rampant hug sessions and then kill him in a violent rage. Yeah, best stick to the old ways eh?’

As with all television shows, my fem-senses perk up, and my brain can’t seem let me just mindlessly imbibe the various cliff panoramas *curses brain*. At every turn, the show endeavors to undermine Ellie Miller. In the first episode, she loses her promotion to DI Alec Hardy, played by a moody David ‘Don’t Trust Anyone’ Tennant. ‘A Man?!’ she says ‘this area needs a female DI – what happened to I’ve got your back?’. The acknowledgement of her struggle only really seems to reinforce how they were probably right not to put her as the DI as she does do a lot of crying (because she’s a woman, obviously). Luckily, Colman does a fantastic job of turning what seems to be a weepy, Carrie Mathison-esque role, into a touching and funny character.

Unfortunately, this progressive female character only lasts for about 8 minutes. The show seems so intent on emphasising the fact that it is literally ONLY because Miller’s husband, Joe, had nothing to do that he turned to grooming Danny, the boy who is murdered in the first episode. Notably, his reasons for doing so are as follows: ‘I wanted something that was mine. Ellie has her job, Tom [their kid] does his own thing’. You can just imagine him running through the past time possibilities – ‘cycling?…nah. Embroidery? …too fiddly…grooming a boy? …cheaper than a gym membership…’

It’s not only Joe Miller who can’t maintain a non-conventional male character. Danny’s father is adulterous, whilst DI Hardy literally has a defective heart. Most of the men seem to be cold, unfaithful, or…er…a pedophile and the women, unsurprisingly, are almost all mothers. Although the show gives quite a good opportunity for female actors, the plot is just another example of a failed attempt at progressive depictions of female characters.

It’s just frustrating to see a successful television show make some attempt at inverting gender boundaries, only to undo it right at the end. From the beginning, I was deeply hoping that they’d just leave the stay-at-home dad character be. Don’t make him the killer. And certainly don’t make him the killer because he’s so fatally unfulfilled with his life. Sigh. Well I guess there’s always next series.