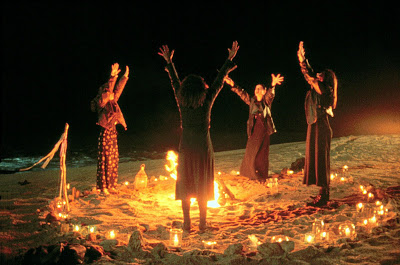 When I was 13, all I wanted in the world was a boyfriend and a top from Tammy that said ‘I It was around this time that whilst at a school friend’s birthday sleepover, high on Dorito dip and the daring of watching an 18 rated film, I wondered past a bookshelf that contained a book of spells. It was written by a psychic consultant, astrologer, numerologist and Indian head massage specialist (try fitting that on a business card) and claimed to contain everything you needed to practise Wicca. I spent the next weekend completely absorbed in said book, and after two days was fairly sure that I was indeed Wiccan and besides, I’d seen Buffy the Vampire Slayer and was fairly sure that Wicca got you results.

There seemed to be no end of Wicca or magic themed shows with female leads around that time. Of course, there was Sabrina, who lived with her two sassy aunts (this was the girl power era, remember?) and then of course Buffy with her sidekick Wiccan Willow, with geeky Giles and her various love interests trailing in the wake of Sarah Michelle Geller’s kick ass cheerleader. And then, who could forget the three sisters in Charmed (Alyssa Milano was my personal fave) and Hocus Pocus?

Together, these on screen woman witches or vampire killers defeated any number of nocturnal nasties, and their badass presence before the saccharine High School Musical era of generic simpering schoolgirls was captivating and exciting. However, at home in the countryside, these women felt very far away from my everyday life. Although I probably didn’t realise it at the time, I desperately needed to capture this essence of fearlessness and power and use it for myself. I wanted to be these women who could defeat demons and death during the lunch breaks of their everyday jobs or classes and still get the guy, who then loved them not for their looks but for their skill with a spell or a stake and their inherent goodness and bravery. These women made standing up to bullies look easy.

So then, how to bring this magic into my life? The book of spells seemed like a good start. Naturally, my first concern was cooking up something that would enable me to fall into the arms of my one true love in the lunchtime dinner queue, and without delay I went about following the book’s instructions. After lovingly drawing a cartoon version of us both holding hands, I tore up the paper and, when my mother wasn’t looking, buried it in a plant pot in our garden that contained something that used to be a gardenia until my dog sat on it.

Needless to say, my love remained unrequited and I remained an awkward 13-year-old who had never been kissed, but it didn’t stop me getting obsessed with Wicca. In my pedal pushers and purple patent pleather gilet (some wishes do get answered, guys) I erected a Wiccan altar out of a TV cabinet on to which I placed a shell, some incense, candles, and my finest glitter gel pen drawing of a pentagram.

My mother, despairing, asked when I would be out of this silly phase, and my father, ever oblivious to good parenting techniques, brought me tarot cards back from a business trip. I spent a whole half term in the miserable Midlands learning their meanings and endlessly telling my fortune, which varied tremendously but seemed on the whole rather encouraging.

I also plucked up the courage that rainy week to email the author of the spell book, shuffling the cards as the painfully slow dial up Internet connected. Much to my disdain she answered saying that I couldn’t really decide to be Wiccan until after my 18th birthday, and gradually, after several failed spells and my mother sneakily tidying away my altar under the guise of a spring clean, I parted ways with Wicca. Of course, I still religiously watched Charmed every Sunday in my room when I was supposed to be doing homework. But, as teenage girls are wont to do, I got bored of the lack of results from Wicca and moved on to the next thing, which in my case was karate, inspired in part by Buffy’s skill at delivering a timely roundhouse kick to the head.

Now, I would never call what I did aged 13 a spiritual awakening, or anything close to Wicca as practised by the thousands of adults who identify as Wiccan around the world. My brief obsession with the modern pagan religion and its related TV manifestations, which many of my friends also ambled through, was probably born out of longing to change the unchangeable, namely my non-existent love life, but also what felt like the fixed nature of the world. It also, rather paradoxically given the nature of my strongest desires, felt fascinatingly and reassuringly like a woman-dominated space, something that, going to a mixed comprehensive school, I had never experienced before.

When you’re 13, you feel like you have control over very little: your body, well that’s starting to change and to produce the imaginary lumps and bumps dictated to you by the women’s magazines you stand and read off the shelf in W.H.Smiths. You don’t control your free time, and you certainly don’t control the fact that you have double maths every Friday afternoon. And so you see, for a young girl who’s discovering that her every move appears to be dictated by nasty women in magazines or nasty men in positions of authority, to possess something all their own which gives hope that some things in life can be controlled, that desires and wishes can be fulfilled like the fierce women on the TV programmes who I idolised, is rather important after all. Even if it amounts to little more than burying creepy pictures underneath dead pot plants and sneaking spell books into the covers of algebra revision guides.

6 thoughts on “The Teenage Witch”