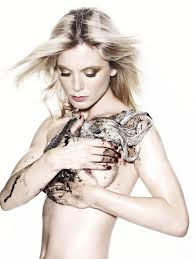 Never has any body part been advertised as much as breasts are. We see them every day. Hell, most the readers here have a pair. We’re so used to seeing tits in the media, (either stuffed into low cut tops, those on a plastic Barbie and shell-clad mermaid ones), that it doesn’t register sometimes how advertisements makes use of them. Recently I’ve been seeing a variety of pairs being used to advertise all kinds of products, including the following monstrosity that hit me a few weeks ago when I unfolded the ES on the Tube on the way back from work.
Oh Evening Standard, you disappoint me. I thought you were a slightly more intellectual newspaper than The Sun. But apparently not. It seems the ES has been harbouring dreams to cultivate an equally a tacky reputation and managed to put it into practice recently, thanks to the Fishlove Project. The Fishlove project is about raising awareness of the dangers of overfishing. If you don’t know what I speak of, you can view all of the pictures here, but suffice to say it involves various beautiful women clutching various sea creatures to their naked tits, like in the above picture, from 2011, which is by Rankin and which I have entitled ‘Squid tits’.
Opening the newspaper, I was treated to the 2013 ‘collection’, a few arty black and white photographs of Tara Fitzgerald, Mélanie Laurent and Zoe Tapper who were featured hugging or caressing slimy fish to their bare bodies. Look through the album and you’ll see men like Simon Callow and Michael Gambon posing with pet fishies of their own from the shoulder up with barely any nudity in sight. Why would that be less appropriate to print in a paper than a bunch of naked women whose nipples are danger of being tweaked by crab claws?
Considering their apparently relaxed attitude to nudity (despite the possibility of children on the Tube picking up a copy and seeing it for themselves), none of the (admittedly few) photos of naked men, such as a more risqué one of Paul Battercherjee were included.
It’s starting to appear that advertisers think the only way  to grab people’s attention to advertise a worthy project or cause is to use a big pair of boobs.  ‘It’s tasteful!’ I hear you cry, ‘it’s all for a good cause.’ Possibly yes and definitely yes. But the fact remains that it’s only women who are being displayed as catches of the day, and that, my friends, is sexist bullshit. Don’t get me wrong, I love a fish and chip dinner and I really do care about the fishing stocks. But why, oh why does it need the boobs? Is that REALLY the only way to get a point across? Should I have extrapolated from that and worn low cut tops to seminars at uni so that people would automatically agree with my points on Nietzsche? Is that what it takes? Such are the hypnotic powers of norks.

Now onto a far less worthy cause. Here is the ad for the new Skoda Octavia, clearly catering to overpaid douchebags. Why? Because the air conditioning is enough to raise nipples from any woman, according to the advert. The true sign of a manly vehicle, apparently. Clearly the fact that air conditioning also causes men’s balls to shrink was shelved at an early brainstorming session. Shame.
Next is the more conventional but no less irritating Tom Ford’s fragrance for men. A double whammy here, because it not only features a bottle humping a model’s boobs, but her shiny bare Barbie beaver is sporting an unflattering/uncomfortable pose with the bottle as well, looking revoltingly as though Tom Ford will personally give her ‘a good seeing to’ with it. It’s a little disturbing. In fact, although this bottle isn’t exactly penis shaped, it’s pretty fucking phallic, dontchya think? This is marketing for simpletons. Tom Ford’s fragrance ad looks like it’s trying to convince a man that, in spraying himself in this noxious concoction, his woman will wax her Netherlands and then, like, lounge all over the house naked and oily in a state of orgasmic trepidation until he comes home and ravishes her. It’s the kind of hipster sexist crap that Lynx can only dream of. 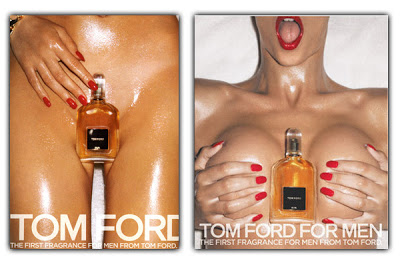 Last on the list is on a more serious topic, and that’s Chris O’Dowd’s admirable attempts to raise awareness of male breast cancer. Unfortunately, the team behind the advert have decided that women bouncing topless on trampolines is a good way to go about doing this. Yes, you read correctly, MALE breast cancer is being advertised by topless women. Apparently no men were willing to bare their chests for something so important, despite the fact that, as we are all painfully aware, hundreds of British men whip their shirts off the second the sun comes out. In the video, Dowd’s alter ego Lars, complete with dodgy Swedish accent, massages shoulders and hands towels round as ‘the man with the best job in the world.’ Oh and at the end he mentions briefly that men can get breast cancer too. That’s important, sure, but without all of those boobs bouncing around, you wouldn’t be interested in knowing about that, amiright? It’s not like there was ample information provided either, just a quick throwaway line. I doubt many people got the point of that advert at all.
I think because of its honourable intentions yet poor, pervy execution, this one takes the booby biscuit, but the Fishlove project comes a close second. I don’t have a problem with arty photographic nudity per se, but rather the Evening Standard’s decision to feature only women in provocative poses on their coincidental (or not) page 3. As for the breast cancer advert, it does little to further the cause for men. It just gives the impression that men will only bother watching something of important as long as there are some boobs to attract them with and that, I think you’ll agree, is sexist not only against women but AGAINST MEN.
In short, boobs are used way too much in advertising and media and it’s pissing me off. Got a dessert to sell? Show some shapely breasts straining out of a shirt. A Lawnmower? Flash a bit of chest. A charitable cause? Get yer kit off luv.
While I think the campaign against Page Three is important, there are tits in far less obvious places than within the sticky pages of that particular tabloid, or even Nuts and Zoo. This is a blatant class issue.  As Camilla Long so astutely points out:
‘A new feminist campaign called Lose the Lads’ Mags wants to clamp down on nipples in newsagents by banishing softcore porn mags such as Nuts and Zoo. It’s a kind of dirty uncle to the No More Page Three campaign, which seeks to remove nipples from the “family” paper The Sun. Only why does the campaign focus on rubbish men’s mags and not on what I like to call “Chanel tits”, the beautiful and artfully directed nudity you find in some of the posher glossies? Is there a hierarchy of breasts? An apartheid of norks? Are some breasts more equal than others? It is true that most women feel less threatened by high-class boobage, and that as soon as Rosie from Middlesex takes off her top it’s all-out tit-mageddon — an orgy of middle-class sanctimony and hand-wringing?’
I’m with you, Camilla.
- SM

8 thoughts on “On Boobage: A Roundup of Tits in Advertising”