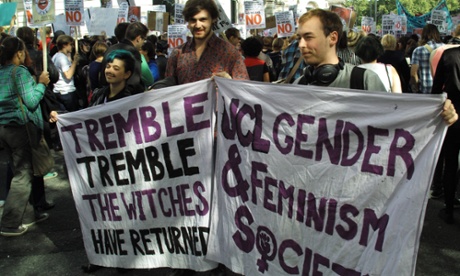 Over my pre-university summer, I often thought about what going to an age-old Russell group college would hold for me. Visions of sitting up all night, drinking, smoking, listening to one of the great Kates (Nash or Bush) and debating about who we loved more, Simone De Beauvoir or Caitlin Moran, came immediately to mind. Wide-eyed and optimistic, I fully expected to be greeted with such scenes as soon as I toddled off to London with my heretofore unchallenged belief that everybody believed in equality and wanted to talk about it over Class B drugs. Then reality hit me like a smack on the bottom from a middle-aged perv.
Up until this point, I had never had my values questioned except by my brothers, and even then our discussions were fairly civilised. That’s how I thought being a feminist  at university would be: simple, with my views respected and accepted, barely even questioned. So when my personal tutor asked us in turn to tell the group something about ourselves, and I proudly announced, “I’m a feminist” – to which my tutor replied, “Oh wow, that’s brave” – I began to wonder.
Undeterred, I joined my university’s Feminist Soc – still in its raw infancy – slightly baffled as to why it hadn’t been around for more than 2 years when the university had been around for 187. At the first meeting, I was met by a throng of fierce third-years, who were, as you might say, “well into Germaine Greer”. That was not what I wanted. I wanted easy, laid-back feminism; I didn’t want to fight for it; I just wanted to label myself and move on, never getting into pesky arguments, never provoking interrogation. But very quickly my rose-tinted specs had been ripped off and trampled into shards. I realised I was actually going to have to do a lot of arguing to get them back.
Being a first-year, I was of course drunk for the majority of term time, socialising glass-in-hand, still searching for the feminist discussion my academic programme wasn’t allowing me. In the first semester, my social group was mainly composed of guys who I’d become friends with in halls, which suited me fine for about five minutes. By the end of freshers’ week, however, one of these academically gifted young men had already announced that he was ‘going to have a go on that’ (me), before spewing every stereotype of misogyny out in an Estuary pip. One night, after my third or fourth pint, I called out his shitty attitude and we started arguing over his assertions that ‘feminism was futile’, that he didn’t believe in it, and that it was over.
I am ashamed to say that at this point, I totally lost my shit. My bubble was burst, because quite a few of my so-called friends in the group were on his side. Here I was, at one of the top universities in England, signing £40,000 away, to be told that one of my most precious values was useless – something backed up by the fact that feminism was scarcely mentioned in any of my myriad lectures.
But university is for learning, and I have tried to do my part in imparting some femi-wisdom unto others, most memorably once thrusting How To Be A Woman into the white hands of a middle-class male med student, who was duly converted. I’ve changed one or two opinions, which makes me happy enough. But there’s no use pretending that it isn’t an uphill struggle.
I used to be irritated by the strain of feminism which seems to see sexism in everything, but that’s because I’d never come up against true sexism before. I called myself a feminist thinking that I didn’t have to do anything about it.
But now that, amongst other things, I’ve been openly objectified, labelled as a ‘feminazi’, and had my bum pinched in the Soho bar where I worked so many times in a single shift that I genuinely lost count, I’m ready to take on the fight I never thought I had to fight.
And not for a second, sadly, do I expect a crumb of help from my academic institution along the way.
-EL