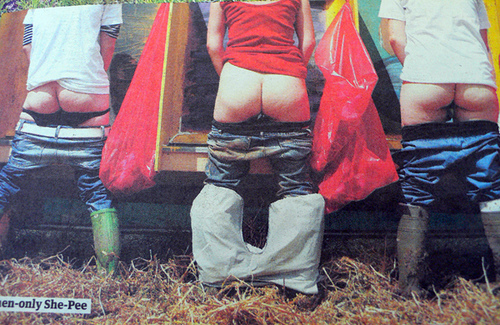 Generally speaking, I quite like leaving the house from time to time. I don’t find it difficult to gain enjoyment from watching bands and going out to eat food that I can barely afford, not to mention drinking various liquids: a habit which I’ve found conveniently successful in keeping me alive. Separately, I am able to partake in these activities with virtually no hassle – though as soon as the two are combined, all-annoying-hell breaks loose.
Having been brought up in the UK where it seems to be valued as somewhat of a national institution, I am no stranger to queuing. I’ve done my time waiting patiently in lines, and sometimes it’s even worth it. However, there is one queue that has pushed me to my limit one too many times – and that is the queue for the female toilets. I certainly don’t intend to undermine the importance of a little privacy during certain toilet-based rituals, but how many times have you stood cross-legged in a queue that’s snaking its way out of the building whilst your male companions skip in an out of the gents quicker than the time it takes you to say ‘I’ve just pissed myself’?
The main argument I have encountered during all of my campaigning (whining) about the toilet-equality situation is one of logistics. To be blessed with the genitalia of a woman is indeed to be robbed of the coveted privilege of the stand-up pee. My question is this; who decided that peeing standing up was so dignified in the first place? I ask you to cast your mind back for a moment to the last time you had no choice but to crouch behind a car/tree/lamp-post/friend because you were literally teetering on the peripheries of kidney failure (like, each and every time I even look at a double gin and tonic.) Squatting down to pee is hardly the most arduous task – and even if you do accidently fall drunkenly into a puddle of your own urine, it can just be that cute secret you share with your closest friends; plus, it’s character building.
The shame and secrecy that society has embedded in ‘the vagina that dares to do anything but take a penis’ has fooled us into thinking that the ‘male’ model of urinating is the cleanest, most dignified and therefore most effective way of expelling things. This notion perpetuated so far that it brought about the (ultimately very well-meaning) she-pee. Anyone who has actually used a she-pee, which is kind of a penis-imitating funnel that allows you to pee like man, will know that although it might be hilarious and good at cutting down queues, it’s hardly the most practical invention and more often than not ends in what can only be described as ‘pee hand’. Not ideal, and, in statistical terms, usually much more hassle than the underrated squat.
Despite my rallying, I haven’t 100% decided on what the practical solution to this dilemma is, though it is a challenge I present to our more entrepreneurial sisters. All I know is that it doesn’t feature funnels, sticky locks or isolating cubicle doors (ready yourselves for the best episode of Dragon’s Den ever.)
Before all of this happens, we need to address the common misconception that it is somehow ‘disgusting’ or ‘unladylike’ to pee in front of each other. Don’t let your body’s functionality be dictated by the patriarchal belief that the only things that should come out of vaginas are orgasms and perhaps gentle lute music. The concern is surely not that other people will be eyeing up your vagina. Men pee together all of the time, multiple times a day, and, as far as I’m aware, come away from the experience relatively unscathed after having encountered very few untoward glances at their dicks.
In order to cut down the queues and subsequently avoid missing out on almost entire second halves of gigs, endings of films and life in general, we must relinquish control of our bladders and respect each other’s desperate need to pee.  Get the hell out as quickly as possible. That means embracing the squat so often reserved for drunken nights behind parked cars.
Maybe we should even introduce a high-five on the way down.
-AB

9 thoughts on “The Shee-Pee Conundrum: Bring Back Squatting”