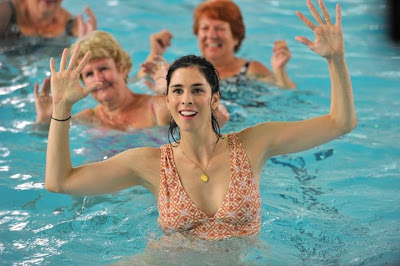 I love the swimming pool changing rooms. What a fabulous, boob-swingingly comfortable place for women to be women – the air perfumed by E45 and Herbal Essences, your ears filled with the sound of shopping lists being read to babies and feet padding on tepid puddles of chlorine. I didn’t realise how important this place was to me until a woman shouted at me for, in her opinion, behaving inappropriately. I had been casually walking around in my underwear and brushing my hair whilst her children were in with her. I suspect she was mainly offended by my terribly mismatched underwear – enormous Batman y-fronts with a delicate lacy bra. It was a pretty horrendous sight. Anyways, she launched into this diatribe about how the way I was walking around “wasn’t nice,” saying that I should be more modest – and I quite rightly stood up for myself. As did every single other woman in there, telling her that this was a ladies changing room and if she didn’t like it, use a cubicle or go to family change with her (far too old to be in there) sons. It felt like a moment of Woman Power.
It was then I realised how precious this place is – I can’t think of anywhere else (apart from your own home, of course) that women are so blasé about being naked, and free from judgement. True, on shoots, models are often very naked, but it’s an in-betweeney naked – we’re only like that because we’re waiting for the stylist to hand us our next outfit, so you sort of style the nudity it out, pretending that it’s totally natural to be standing in the freezing cold in a thong, stilettos and a hat. Strip clubs, burlesque – it’s nudity-as-spectacle, whether the intended audience is men or women. And changing rooms in shops aren’t democratic – we pose for the horrifically unflattering mirrors and each other, trying to make the outfits work, slightly jealous of the invariably taller, prettier girl in the same get up, who can actually do her zip up, our self-confidence crushed by horrible lighting and itchy static.
No, the swimming pool changing room is the place to be naked, carefree and a female. Every age, every generation, every walk of life. You don’t stare or scrutinise one another in the changing room, but you can realise that everybody is gloriously imperfect (or rather, human) when there’s no airbrush around – there are fat, thin, old, young, sporty, lazy, toned stomachs and wobbly bottoms, caesarean scars, leg hair, pubes, pubelessness – but somehow, these labels are removed in this little pocket of woman space – they are just people, here to get ready for a nice swim. Women can just be.
Women open up to one another in the changing room. I hear conversations between strangers about childbirth, childrearing and grandmothering, I hear women communicating with their daughters, teaching them the ways of the world. There’s meaningless gossip, and pure, self-absorbed silence. Often it’s a one-off conversation with someone you’ll never see again and mainly ignore once you’re out in the lanes – that’s ok – it’s the magic of the changing room. Oh, and when there’s a kid who’s a bit…’starey’ when I’m getting changed, I try to be cool, remember how much my friends and I would stare at the naked ladies when we were young, learning what a women’s body looks like. If they realise we’re all the same under our clothes, maybe they won’t have issues around their bodies when they’re older.
And something else upset me about that lady shouting about my ‘inappropriate’ behaviour. I personally love how unselfconscious women get in the changing room. Feet on the bench, bending over to energetically moisturise their ankles – fabulous! Rigorous towelling resulting in a wayward nipple whacking someone’s eye? Go for it! We regulate our behaviour so much of the time – to be coy, and fey, and ‘feminine’ and ‘sexy’ – why not pad around naked for a snippet of your day, not giving two hoots?
All hail the best swimming pool changing room of all time – Hampstead Ladies Ponds. This is what happens when women are freed from the panoptical gaze of men. This is what happens in places that advertising boards can’t reach. This is the space that women create for themselves. Swimming with ducks, topless sunbathing for all ages, yoga, and ping-pong. This place, for me, symbolises all that is great about womankind – when we’re given our own space, what do we do with it? We make it a place where women feel comfortable in whatever skin they have. We encourage strength, health and hardiness. We have ping pong! ‘Feminine’ behaviour isn’t favoured here – no one cares, as long as you don’t shriek loudly or use your phone. Whoever you are – butch, girly, old, young, all races – they aren’t welcomed, persay – they are just allowed to ‘be’.
Why have I talked so long about a place that, if entered, probably isn’t considered at all during the ten or so minutes we’re in there? Because it’s one of the few areas that isn’t policed. It’s one of the few areas that we aren’t expected to ‘act’ to fulfil some sort of societal expectation to be attractive, girlish or sexy. It’s just a load of women in a space we’ve unknowingly created in which we can be at one with ourselves. It shows that all these clichés about women – our cattish nature, our constant scrutiny of other women’s bodies – are just that – patronising clichés, not an inherent nature. When we’re all by ourselves, what happens? We allow each other to go quietly and securely on our way, without labels, expectations or shallow judgements. And did I mention there’s ping-pong?!
- RP

9 thoughts on “Why I Love The Swimming Pool Changing Rooms”