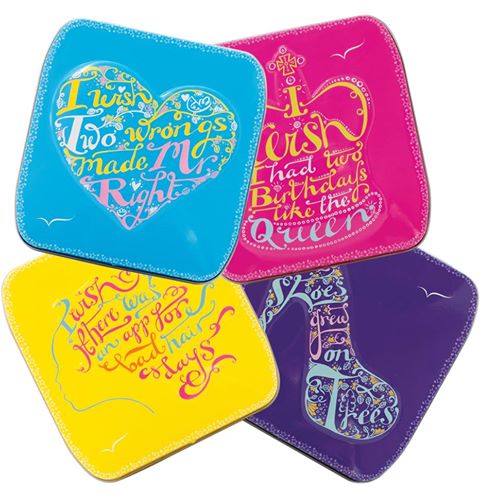 Remember the last time that you came on your period? When you reached into your sparkly, pink handbag, rooted around amongst all the glitter and pictures of kittens, grabbed your neatly packed sanitary towel tin and thought with a dreamy, perfectly lipsticked smile, ‘You know what? More than anything, I wish two wrongs made Mr Right.’
No, of course you don’t. Because the last time you came on your period you will have reached into your handbag, rooted around amongst screwed-up receipts and that weird sticky bit that you think used to be a bit of lunch but you’re not sure, desperately trying to find a rogue sanitary towel or tampon to sort you out until you can run to Boots before it closes after work. You were not thinking about Mr Right. You were probably having your monthly internal rant about having to spend money on this crap and half-forming a strongly worded letter to the government before forgetting about it entirely.
Bodyform are celebrating their 30th birthday, and to help us all enjoy it as much as them, they are giving away free sanitary towel tins with their products which bear such brilliantly witty and insightful slogans as, ‘I wish two wrongs made Mr Right’, and ‘I wish shoes grew on trees’ and ‘I wish there was an app for a bad hair day’. It’s as if they just crawled into the female psyche itself, isn’t it?
This kind of inane fluff is not a shock when it comes to the advertising of products designed especially for women, and with period parapehalia they are quite obviously the intended audience. But it makes it all the more painful that this new depth of inanity comes from Bodyform, the company which bought us the excellent viral video response to a male commenter on their Facebook page who erroneously believed that having your period was all fun and games from their advertising. Bodyform regretfully informed him that there was in fact ‘no such thing as a happy period’. Self-deprecating lolz – a fave of the British public. So why, oh why, previously hilarious people at Bodyform, have you moved backwards as if the Facebook dude never happened? Not to mention, on a practical level, the fact that I literally cannot think of one person who has ever used a sanitary towel tin. Stop trying to make sanitary things happen; they’re not going to happen.
’30 years of periods with Bodyform’ could have been such a great campaign. There is not a lot out there that most women have in common, but periods is one way that we can unite in the face of evil. Periods are not fun. Of course we could all stick a tampon in and go horseriding and swim the Channel and dance about in a club because we are fortunate enough to have access to decent sanitary products here in the UK, but that does not mean that we are actually enjoying our monthly visit from Aunt Rose and everything else that goes with it. In fact, as I am writing this, my girlfriend has sent me a text saying ‘I have stupid period pain. I hate periods, they’re stupid’, which pretty eloquently sums the whole affair for me (oh yes, because lesbians also get periods. FYI Bodyform, I really couldn’t care less if two of my wrongs made a Mr Right).
Women don’t want to be patronised with regard to our periods. We all know what the deal is: they’re rubbish. We are not choosing to buy a Bodyform product because we just can’t get enough of sanitary towels – we are forced to buy them out of cruel, biological necessity, which is incidentally how you make your money. So instead of cutesy, unbelievably narrow-minded and unimaginative campaigns, could you level with us instead, the way that you used to when we were first going out? We don’t need a tin with a silly slogan but we would like a piece of birthday cake or a free chocolate bar or maybe just some free sanitary towels with a sad face on them saying, ‘It will be over soon, babe’. Because us women are smart and savvy buyers, and we drive the consumer market. I predict that the first period product company to recognise this and appeal to us accordingly will do extremely well indeed.
-LK

8 thoughts on “The Period Tin You Never Knew You Needed”