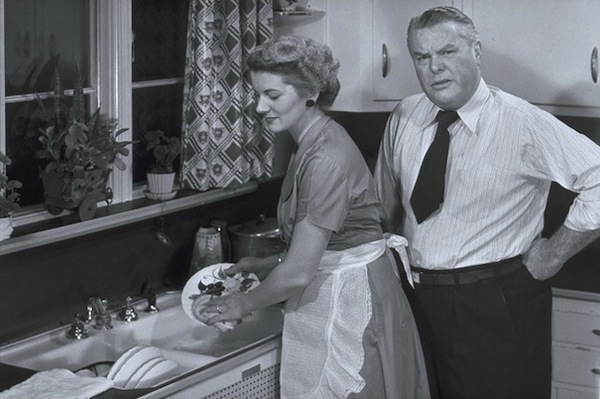 Poor The Menz. The internet is horrible for them. It’s full of women whingeing about getting raped, complaining about being told what to wear and getting their knickers in a twist over stuff like FGM and honour killings – stuff which usually happen thousands of miles away! And for some reason, this is their fault! What have they ever done? They just want to sit quietly with a refreshing beverage and some telly and OH JESUS FUCK IT’S THAT ADVERT WHERE MEN CAN’T DO HOUSEWORK. Why are they always being portrayed as stupid and inept? That’s real sexism, right there. Who will take up their plight?
I will. Because I want to support our allies. And I believe a man who does housework is one of greatest allies a woman can have in this great battle we call “of the sexes”.
I have dated men who would have torn up a chick’s Gloria Steinham paperback in shocked rage, were you to call them sexists – and yet, these beacons of feminist hope fundamentally believed that when it came to the ‘bleach arts’, women were “just better at that sort of thing”. And instead of sticking the toilet duck straight up their poop shoot a la Lily off Bridesmaids, I rolled my eyes and inhaled deeply of Domestos.
Now I live with a man who has no notion of “girl stuff” and “boy stuff”. A man who has washed more pairs of my own pants than I have. A man who scrubs and sprays and picks up my dry cleaning with no agenda beyond “this is what human beings do, to be kind to each other.” And even though I like to think of our household as a gender neutral zone, it makes him masculine as fuck. He is sexy as anything. It makes me want to bang him all the time. And it means that I never, ever wash up while resentfully thinking, “Why always me, always?” I never have to fight the temptation to put Vanish in his tea.
My boyfriend is quietly leading a feminist ally revolution, in SE10. And I know that guys across the country are joining in.
Women are not born wearing Marigolds. We are not “keepers of the nozzle”. We are not “better at that sort of thing”. But maybe our Mums, consciously or unconsciously, passed on some message about the importance of keeping one’s house nice because that was how our Dads liked it. Maybe, when you’re at home all day with a child, you’re more likely to notice and keep track of the stains and splodges that materialise than that guy with a briefcase who also lives there, and returns home every night at seven, tie askew, complaining loudly about “the Sanderson account”. Maybe you lived with some “lads” at university, who, for a “laugh”, collected semen and urine in pint jars, and would smack your arse and shout, “Wahey! Good wifing!” when they saw you tipping their bodily fluids down the sink. Think about every single time you have heard or read a cultural reference in which someone is going home to their Mum to get their washing done. It’s never, ever Dad. Even though, logically, sometimes it must be.
Cleaning is not sexy. It is not aspirational. Cooking is messy, and sensual, and creative, which is why it has been co-opted by the telly, and why boys want to have a go. The only time I have seen a male cleaner properly featured on television is in the episode of Black Books where Bill Bailey hires Mark Gatiss to stroke some shelves for dust while murmuring, “Mmmm, filthy”.
And guess what? Women want to be messy, and sensual and creative. They don’t want to be reduced to admiringly mopping up some guy’s jus. But cleaning, and childcare, and communication with the council about the bins are undeniable. The sun rises in the east, the unwiped hummus patch will turn green and stinky, and before too long we’re all living in E. coli pits of political point scoring, in which no-one can be invited over for beers.
Let the men who clean rise up, and speak with loud voices! Let us create a future world in which we see an old advert for Flash and cry, “Ahahahahahaha, man, people were CRAY in 2013!” Let the teen boys of tomorrow turn to their Dads for laundry advice!
And if you’re the sort of man who has ever pointed at a stain and turned to his wife or girlfriend and said, “But you’re better at that sort of thing,” stop talking and start paying for domestic help.
-DB