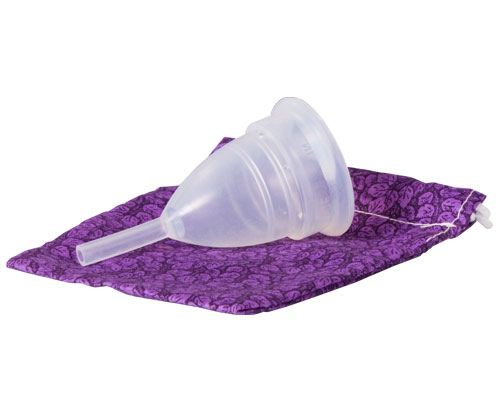 So, periods are things that happen. Once a month (ish), blood and other fun things come hurtling out of your lady area, and you need a way of dealing with it. Enter a choice of two methods: pads or tampons. Until recently I used a combination of these, and in general, they did the job. But they were also frequently uncomfortable, occasionally leaky, costly to keep buying and cumbersome to pack in a holiday suitcase. And what I wish my PSHE teachers had told me (a phrase I use worryingly frequently. Is it just me who thinks there’s some major loopholes in our education system? I know I went to a Catholic school and all, but you would’ve thought we’d have a lesson on contraception before year 11) was that there’s also a happy alternative: a menstrual cup.
For those who don’t know, a menstrual cup is essentially a silicone container that you shove up your vag to collect the blood and gore. After a few hours you pull it out again, empty it into the loo, rinse it clean and put it back in again. A simple yet brilliant invention.

I’ve been using a Mooncup for my last four periods and I LOVE it. However, the most common reaction I’ve had from friends I’ve mentioned it to is, ‘Ewwww, I could never do that!’
Why? Perhaps because it looks far too huge to fit in your vag, or because seeing a cup of your blood is gross, or because it just seems like a weird thing to do. But along with many other misconceptions, I’ve found that none of these things are true. So I’ve summarised my experiences of using it to help you decide whether it might work for you.
Possible Off-Putting Problem Number 1: The Size of the Thing
To tell the truth, my initial thought when I first saw my Mooncup in the flesh (before it went ‘in the flesh’, if you see what I mean…) was, ‘That’s fucking massive, how on earth can I fit that thing inside of me?’ It’s a fair consideration – especially if, like me, you haven’t experimented with putting many particularly large objects up there before.
Learning how to manoeuvre the thing in can indeed be tricky, but once you’ve mastered the art, I can guarantee that your vagina will quite happily accommodate it. The trick is that you fold it to insert, and then it expands once inside. There are several folding methods you can try – I personally prefer the second one shown here. The first few attempts for me were a little painful, as I found it difficult to keep it folded and sometimes it would pop open prematurely. But after practice it’s simple and painless (although sometimes I think it’s opened when it hasn’t, and I feel a surprise ‘pop!’ a few minutes later…any advice from Mooncup pros on this strange little phenomenon very much welcomed!)
Taking it out can also be something of a challenge initially; you have to break the suction seal it makes with the vaginal walls, and ease it out. There is a stem at the bottom of the cup to help with removal, but you can trim this or cut it off entirely if needed, depending on the length of your vagina (you don’t want the stem to be poking out of you when it’s inserted, as it can rub uncomfortably). I trimmed the stem and worried on first removal that I’d cut off too much, but then had the marvellous realisation that my vagina has muscles that can be used to push things out of it (a friend of mine recently had an equivalent revelation when she accidentally ejected her boyfriend mid-copulation, during a particularly vicious sneeze.)
Possible Off-Putting Problem Number 2: Blood and Mess
Some female (and male) friends I’ve spoken to have found the thought of a cup full of menstrual waste disgusting. True, if you’re squeamish, it might take a bit of getting used to. But you’re going to have to come into contact with your own blood in some form whatever form of sanitary protection you use, and I find it’s fascinating to be able to see exactly how much has been collected each time. There are even little measure markings on the side of the cup. I’m almost disappointed when there’s not much there, and start willing my uterus to squeeze out more gunk so I can beat my personal record. Serious.
Whatever the instruction booklets may tell you, it IS messy to remove, especially for the first couple of times. You will have to get stuck in and get your hands dirty (both very literally), and take your time so that it doesn’t spill anywhere except in the toilet. And you’ll need to have a sink nearby, or at least a bottle of water to rinse it before you put it back in (in particular, you have to unclog the tiny holes that cause the suction).
In general, though, once you get the hang of it I find it’s a lot simpler and cleaner than pads or tampons. Unlike with pads, you won’t get blood all over your external bits and there’s much less danger of exuding unpleasant odours. And unlike with tampons, you don’t have the hassle of that bloody string (dubious pun intended) getting in the way every time you need to pee.
Main Non-Off-Putting Benefits
It’s reusable, again and again and again. Which means it’s cheap (in the long run), and if you’re due your period on holiday you only have to pack one little thing (though I like to take a few pads too, just in case). AND it’s better for the environment (your vag is truly riding its menstrual waves aboard Greenpeace’s Rainbow Warrior).
It’s also arguably healthier for your vagina than tampons – it doesn’t dry it out and won’t leave fibres stuck up there. And you can leave it in for 8 hours, or possibly more (depending upon whose advice you read). It’s even safe to use it when you’re not on your period, which is great if, say, you’re round a friend’s house and are not sure whether your period will turn up overnight.
There’s plenty more information and reviews across the web if you want to find out more. I’m sure I or fellow cup users will happily answer questions in the comments section. And in case I haven’t yet convinced you to give it a go, let me leave you with a recent discovery of mine: it makes cunnilingus a lot more palatable for your partner. ‘Nuff said.
-LL