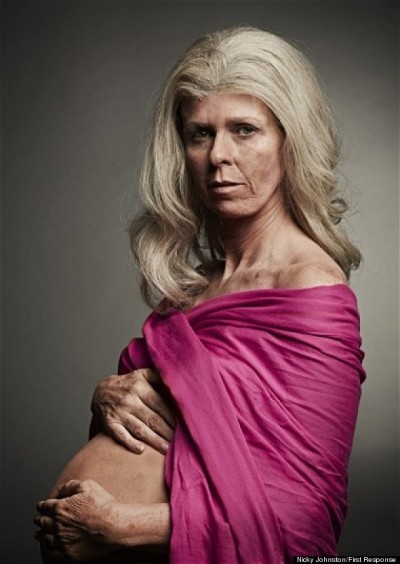 There is a ray of hope for anyone disturbed by the ‘Get Britain Fertile’ campaign ad (pictures of Kate Garroway made up to look old and pregnant, ostensibly a ‘friendly reminder’ that fertility doesn’t last forever, but with an element of ‘aren’t older women gross? Wouldn’t it be, like, disgusting if they were pregnant?’ thrown in too). In an Atlantic article reprinted in the Observer last Sunday, Jean Twenge, a psychology researcher, suggests that our ideas about female fertility are based on questionable data: apparently it’s not as difficult to get pregnant after 35 as you think.
This is welcome news in lots of ways: having a few more years to conceive will undoubtedly make some women’s difficult decisions a bit easier – in Twenge’s case, it would have saved her a lot of angst after getting divorced aged 30 and fearing she wouldn’t have children. And, if we really are skewing data to that extent, it confirms feminist suspicions that there’s something a little bit strange about our obsession with declining female fertility.
But whether the ‘cut off point’ is 35 or 40, there’s still going to be the kind of media ‘baby panic’ that made Twenge so anxious. Her discoveries won’t change our obsession with women ‘missing out’ or the fact that it’s always discussed in terms of neglect or irresponsibility: ‘leaving it too late’, ‘gambling with your biological clock’, ‘wasting your fertile years’ or, from fertility expert Emma Cannon in the Sunday Times Style magazine, ‘like making friends with a great-aunt just before she dies, in the hope she might leave you some money, having ignored her all your life. It’s all too little, too late.’ Seriously.
I’m going to suggest something radical here: maybe not all women are feckless idiots, failing to pay attention to their singular most important asset. Maybe they don’t see themselves solely as baby-making machines. Maybe they’re human beings, trying to organise their lives in a sensible and pleasing way, making good and bad decisions, while negotiating all the different factors beyond their control. Obviously if you’re thinking about having a baby, whether or not you’re physically able to could be something of a dealbreaker – but whether you can afford it, whether you want to, who you want to do it with: these are not exactly negligible concerns either. Taking time to work these things out doesn’t strike me as particularly irresponsible, whereas suggesting that women should have children just because they can really does. Perhaps we don’t like the idea of women controlling their reproductive lives as much as we think we do.
Being able to make choices means that you might make the wrong choice. I can’t say for sure that the Daily Mail is wrong and that there aren’t women out there stroking their flat stomachs, looking around their giant houses, considering their glittering careers and thinking, ‘Maybe I should have got pregnant by that man I met on holiday; my life would be immeasurably better if I had. If only a campaign had reminded me of my ageing womb akin to a great aunt with terminal cancer, perhaps I would have bucked my ideas up and remembered what being a person with a uterus is really about. Sigh.’
Of course, I’m sure plenty of women do regret not having children – just as plenty of women regret having them or not having a career or all the hundreds of other things we can’t reverse due to inconvenient factors like biology or death. But the only solution to regret is having no choices at all. Failing that, you could try remembering that, unless you’re in Sliding Doors, there’s no way of knowing if your ‘alternative life’ would have turned out any better. Try to ignore the ‘baby panic’, and just do the best you can with the situation you find yourself in.
-KMB

4 thoughts on “When Are You Going To Get Pregnant Already?”