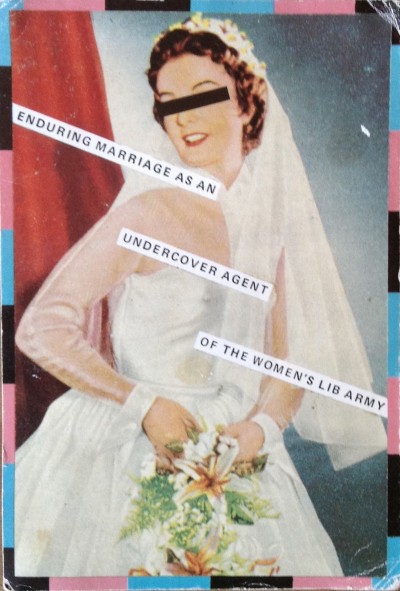 You can hold onto your surname, you can wear trousers and no make-up, but you cannot have a feminist wedding. Trust me, I’ve tried.
When I got together with my best friend of ten years it was a big deal. We’d loved each other as friends for a long time. We felt like taking the step to be together was a big commitment in itself. We didn’t need a legal document to prove how much we loved each other or force us to stay together. On the other hand, we recognised that being married gave us certain rights and a legal status that we wanted, especially as we were about to go to live on another continent for a while. In summary, we wanted to make sure we were the only ones who could turn off each other’s life support machine.
Now, as well as not feeling like a legal contract was anything to do with love, I’ve always had a problem with marriage because it’s rooted in patriarchy and religion, both things which aren’t really for me. But hey ho, we both wanted the legal benefits, so we did it, and tried to make it as much a reflection of what we believe in as possible. So for example, because to us it was just the signing of a contract, we didn’t have any guests. I wore trousers, as I’d never really envisioned the whole princess dress thing. We cut anything superfluous out of the ceremony. However, by the end of it, I felt like the whole thing had been hijacked by big daddy patriarchy.
First things first, we had to check over the details for the wedding certificate. Name, occupation, your father’s name, your father’s occupation. Now, I haven’t really seen my father much in my life. Fine as he is, I’m from a single parent family and was raised by my mum with a supporting cast of awesome grandparents. I asked if I could put my mum’s name in the box. “No, it has to be your father.” I said he had had very little to do with my life, and my mum was much more relevant. “No, not allowed.” That’s arbitrary and sexist I thought, so I left the box blank in quiet protest.
The ceremony began. It was reeeal short. We had contemplated throwing in ‘The Final Countdown’ as entrance music, but decided in the end to save the partying for another time. Speedily therefore we got to the ‘I do take thee to be my lawful wedded husband/wife’ bit. I don’t really like the terms ‘husband’ and ‘wife’ because they’re gendered; I’d much prefer ‘partner’, but that lovely neutral modern term wasn’t allowed. I actually laughed out loud when I got to that bit…to me he’ll always be my best friend, and that isn’t a gender specific position. I somehow managed to pull myself together and make the vows and that was that.
But then came the final blow. The time had come to sign the wedding register. I picked up the pen. “No no no. He has to sign first.” “What the? Why?” said my now husband. “Well, because he’s the man and he’s supposed to take care of you.” That was actually the explanation given to us!!!
After all that, I felt like the whole idea of gender equality legislation in the UK was a nonsense. How can we be equal when inequality is so deeply ingrained in one of our central institutions? In France, opposite-sex couples can have civil partnerships. We in the UK should have this right too, and if we get it I for one will be getting a divorce and starting a partnership!
- PK

14 thoughts on “You Can’t Have A Feminist Wedding. Trust Me, I’ve Tried”