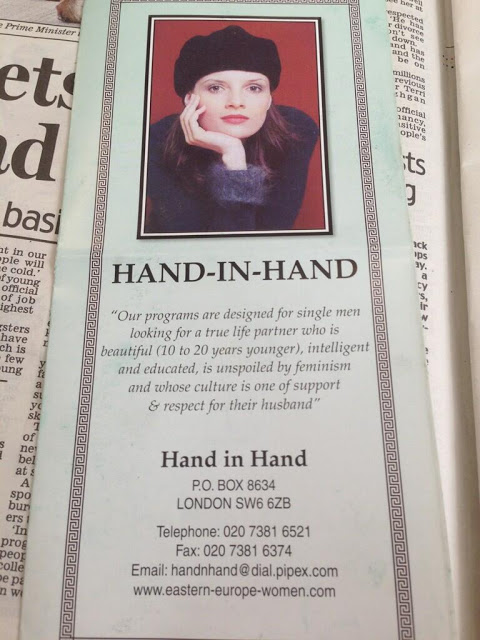 So, Natalie, one of our writers tweeted this photo this morning. Apparently some of her male colleagues were handed it outside Embankment tube section. Obviously this dating agency is a whole clusterfuck of wrong that I’m not even sure where to start, but it was the assumption that you can simultaneously be ‘intelligent and educated’ and yet ‘unspoiled by feminism’ that first caught my eye, obv.
Hand-in-Hand promises to deliver the kind of submissive, compliant Stepford wife more reminiscent of the 1950s except…hold up, hold up, NEWSFLASH: they’re all in EASTERN EUROPE AND WEARING BERETS.
A quick glimpse inside the leaflets reveals a carnival of even more cuntery: 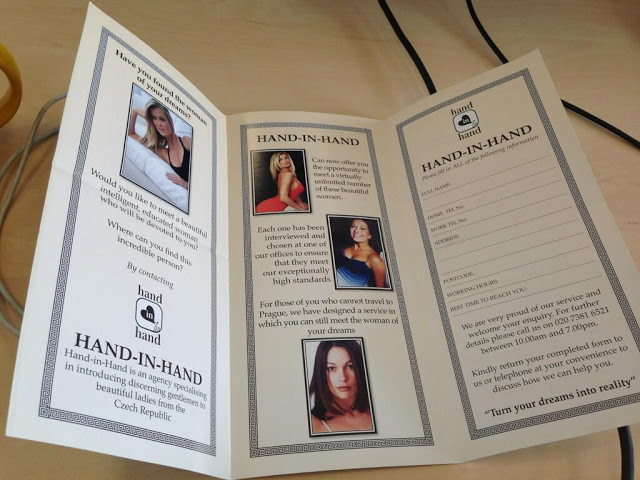 Stock photos reveal a selection of ‘beautiful women’ who, much like women in medieval times, have been hand picked at the agency’s offices ‘to ensure that they meet our exceptionally high standards’, probably by being made to stand in a line while having their waist to hip ratios recorded with a tape measure as they weep for their homeland and scan the room for possible escape routes. DISCLAIMER: I’m not jumping to conclusions and saying these guys are guilty of white slavery (hell, I’m not my mother) but this whole shebang definitely has a trafficky vibe. Indeed, the website claims that ‘we have 50 regional women in the Czech republic to find our women.’ Probably brandishing massive butterfly nets.
These photographs were also clearly taken in the nineties, proving that the dreams that Hand-in-Hand are magically able to turn into reality are not limited to that of sex with a dutiful and compliant woman with no ideas of her own, but also your boyhood dreams of TIME TRAVEL. Awesome. 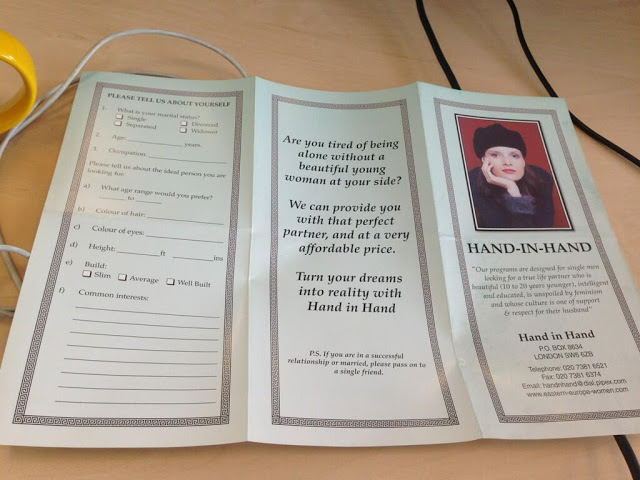 The reverse of the leaflet allows you to specify exactly the kind of woman that you want, from everything to build to eye colour to hair colour. As a man, you’re of course not asked to divulge any of this information about yourself, the assumption being is that you’re the kind of unattractive jowly divorced arsehole with an inferiority complex who would order a mail order bride from a leaflet you were given outside a tube station.
But it gets better. A glimpse at the website reveals a how Czech women are being pitted against Russian women to compete for the title of ‘true life partner’.

Czech women win, because they don’t have AIDS and you’re less likely to get mugged in Prague.
Bleak, fucking bleak.

14 thoughts on “FYI: The Perfect Woman Wears a Beret, is Unspoilt by Feminism, and Doesn’t Have AIDS”