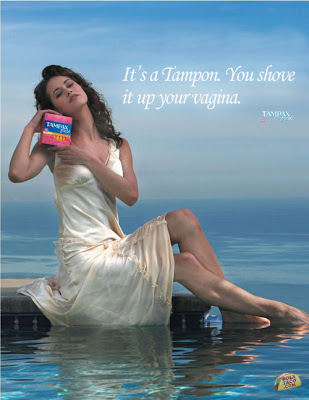 (via imgur)
I’m in my mid-twenties and I’ve never properly used a tampon. Well, I did once, on holiday when I was fifteen and I thought I might be pregnant. My mum was getting tired of me going on about it (imagine the phrase ‘muuuuum, what if I aaaaam?’ whined repetitively at you while you’re trying to Dead Famous by Ben Elton on a lilo, and that was my mother’s holiday), so I thought I’d put one in to you know, maybe tempt the period gods to be bit more forthcoming. Unfortunately I decided to do it while ensconced in the filthy toilet of a small Greek cruise ship, and I took it out pretty sharpish because despite what every magazine ever and all my friends had told me, I could feel the thing up there the whole time. I’m a pretty sensitive person (if I’m reading about someone having a gross medical procedure I’ll start feeling all dizzy and ‘aware of my body’ – my boyfriend calls me ‘the Victorian lady’) but my pussy is not a total pussy, if that makes sense. Stuff has gone up there. Smear tests are a doddle. Hell, after a colposcopy, where they raise your fanny up to face level, look up it through a big pair of binoculars, and then basically burn off all your cervical pre-cancer using a laser, all casual and chill as the radio plays in the background, rendering the Coldplay track ‘fix you’ not only startlingly appropriate but also even more painful (if that’s even possible), a smear test is nothing. I had one yesterday, actually, and the nurse walked in to see me spread eagled on the table and ready to go, (‘sup’) having already assumed the necessary position. Let’s get this show on the road, lady, I need to home by five.
So my aversion to tampons isn’t what my ex-flatmate referred to as ‘vaginaphobia’, because it only really applies to tampons (though I’m not big on fingering, tbh). For this, I FULLY blame Shout magazine for its mid-nineties preoccupation with Toxic Shock Syndrome (I never saw the episode of 999 on this topic, or the Casualty where the girl gets it at the fairground, but readers have reliably informed by that they also were fairly effective at putting paid to teenage tampon use). The disproportionate coverage given to TSS by teenage magazines instilled the fear of god into me, and ensured that I would never feel confident about using tampons. Every time an inexperienced thirteen year old would write in to a problem page about that brown stuff in her knickers, she’d be pointed towards a helpful guide (sponsored by Tampax) accompanied by the massive caveat of: ‘LEAVE IT IN TOO LONG AND YOU’LL DIE A HORRIBLE DEATH’.
So, yes, I do blame Shout (and Mizz and Sugar and J-17). Plus the time my school gave the girls little paper bags full of free tampons. That afternoon, during French class, while the boys were busy swinging lilets soaked in Fanta around their heads, Laura O’Sullivan knocked on the door and announced that all the tampons that they had given out were past their sell-by-date and needed to be recalled. ‘If you’ve put one in already, you should go and take it out’, she announced through her Hubba Bubba, as several pale faced teenage girls fled the room.
So, really, excepting the Greek episode, I’ve never used a tampon. A penis went up there way before a little cotton plug did. This is a huge source of shame to me (not the penis bit- SPOILER ALERT: I wasn’t pregnant). By not using tampons, I can’t help but feel as though I’m missing out on a huge part of being a woman. Friends are always all, ‘but tampons are amazing! They make your life so much easier’, as though they were a fucking Palm Pilot circa 1993, or a magimix. So much of female experience seems to be related to the existence of the tampon, to being able to partake in the oh-so-casual lavatory conversation of ‘do you have a tampon?’ Never have I ever been able to write in to ‘cringe confessions’ about the time they all came tumbling out of my bag in the cafeteria. Never have I been able to spontaneously stop a stranger’s nosebleed, like a menstruating Florence Nightingale.

Tampons are an initiation to femininity which feel I’ve missed.
You might say that I’m reading too much into this, and you’d be correct. But it really does bother me. I’m nearly 30 and yet, when I’m on the blob, I use Always Ultra, the same pads I’ve been using since I was fourteen. I waddle around like I’m wearing nappies for five days a month, and it feels gross. Not long ago, Bodyform launched these sanitary towel tins which, by announcing in curly font that ‘I wish two wrongs made a Mr.Right’, made it perfectly clear who their target market are. Not me. Teenage girls. I should not be using the kind of product whose makers think I need a fluorescent tin with a ‘witty’ slogan on it to make menstruating less embarrassing.

I just know that one of you is going to sidle up to me in the comments and be all ‘mooncup – just sayin”, so let me nip that shit in the bud right now. It might work for you, oh imaginary laid-back internet girl. You have flowers in your hair and toe-rings on your toes. All your fashion is ethical and the quality of your weed is second to none, and of course it works for you. But, although I have wanted to be you for a very long time, it just isn’t meant to be. I’m too uptight, too mainstream, too belt-through-the-loops. Plus, I’ve realised that I feel about mooncups the same way I do about tampons and that time I found my mum’s diaphragm, namely, ew, get that away from my area.

In fact, writing this has made me realise exactly what the nature of the problem is. Basically, I’m fine with stuff going up there as long as the stay isn’t semi permanent. That rules out tampons, diaphragms, coils (I have always imagined these as gigantic, slinky-like springs), etc. However, anything that fancies a quick in-out is pretty much cool by me (I know how this sounds, so I will use this parenthesis to reiterate that yes, consent means asking every time).

Not that being able to go for a swim when I’m on wouldn’t be amazing, but it looks like now would be a good time to accept that my disdain for tampons is probably here to stay.

Thanks, magazines. This is another thing that you have done to mess me up.

And thanks internet, for the free therapy.