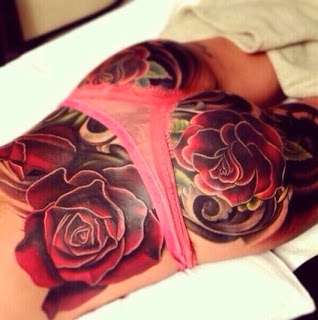 First off, I’d like to address the snark that this piece will probably receive, because I’ll bet my sphincter it’ll happen.
Someone will comment, thinking themself hilarious, that now Cheryl Cole is literally talking out of her arse.
Well she’s not. This is Cheryl Cole’s arse talking. It’s a completely different thing.
And if you’re having difficulty grasping that concept, then perhaps you were one of the people responsible for the non-hashtag sentence “Cheryl Coles” trending on Twitter, and should maybe go back to school and learn what an apostrophe is.
Yeah, I’m a smart arse.
So, a few of you don’t like my new tattoo. Well sucks to be you. I am Cheryl’s arse and I love it.
I know Cheryl loves it too and she’s really happy with it. At least I think she is, I can’t see her face from back here, but I’ve overheard snippets of conversation and she says she’s pleased.
I mean, really? What’s the big deal? Who exactly is being hurt here?
Me. It was fucking painful. It took fifteen hours.
But what I mean is, Cheryl’s not one of those nobhead neo-Nazis who get swastikas inked on their foreheads. She’s not gone and got a ‘comedy’ tattoo of a moustache on her index finger. 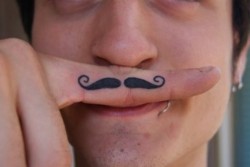 It’s funny how at the very moment y’all are up in arms about my new artwork, people the world over are lauding Wentworth Miller for his coming out letter. Oh, like what, he wasn’t rocking a massive all over body tattoo of a PRISON until recently?
What short memories people have. Maybe you should get this stuff tattooed on your brain.
Yeah.
Cos truth is, most of you are jealous. I look better than pretty much every single one of you out there, even though 99% of me is covered.
I mean, we’re always told it doesn’t matter what we look like as long as we’re fit and healthy.
AND HELLO, HAVE YOU SEEN ME? I am one of the most pert arses out there. That’s why when you first saw my photo, even after you’d grasped the whole tattoo thing, you were still looking at it seven minutes later.
People have asked why? Why would she does this to me?
Well, contrary to reports, Cheryl did not take inspiration from her nana’s matching couch ‘n’ curtains set circa 1983.
There’s also been speculation that it’s some kind of esoteric literary reference to the cult 1964 memoir ‘I Never Promised You a Rose Garden’ by Hannah Green. Soz, it’s not that either.
And it is nothing to do with roses being one of the official emblems of the England football team. Nothing. 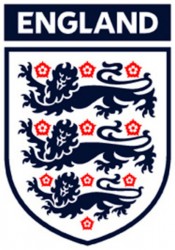 People should be focusing on the positives here. The potential. Slap a picture of me on the cover of a textbook about Henry VIII and the Tudors and I’d put money on History GCSE results going through the roof.
I just hope Cheryl doesn’t get arrested again, because we pretty much just won the ‘Any distinguishing features?’ section of any witness statement form ever.
But she won’t. Because she’s awesome. That’s what you all have to remember. She Can’t Speak French, but she’s awesome.
So, cut out the bitchiness. I am Cheryl’s arse and she can do whatever she likes with me. If you were thinking of quoting the “roses really smell like po-ooo-ooh” line from Outkast’s 2003 hit ‘Roses’, don’t bother. It’s been done.
By the tattoo artist.
The only thing I had a problem with, was I felt that on the photograph we released, I could have been wearing branded underwear.
The underwear was nice, don’t get me wrong, I just think it could have been a bit of a money-spinner if we’d chosen a more visible brand.
Like Ed Hardy maybe. He springs to mind.
So. You can keep the lame dolphin on your ankle, your ex’s name on your wrist, or the Chinese takeaway order you got inked on your upper thigh which doesn’t actually read ‘hope’, as you intended, but rather ‘prawn chow mein’.
Basically, my tattoo just handed your tattoo its arse on a plate.
- Cheryl’s arse spoke to HJP