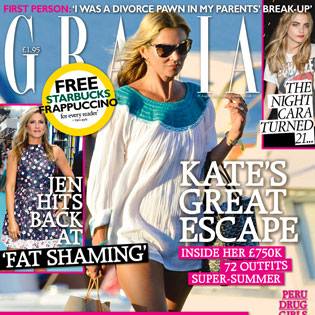 One of the central tenets of existence, IMHO, is the fact that, as a human shaped person, you are always, always learning. Whether it’s being told by a close friend that that joke about rollerblading being ‘a bit gay’ really isn’t OK, or simply discovering that walking your genitals directly into that pointy table corner was not the best move, chances are at the end of any given 24 hour period, you got taught. That’s the nature of the learning curve, bitches.
You could also argue that no matter how entertaining content is intended to be, mass media serves a fundamentally pedagogical function. No matter how fatuous and mundane the information it dispenses can be, it informs you, and by extension also informs your behaviour. I bore this in mind when I bought the latest copy of Grazia magazine for the purposes of absorbing it with my eyes (to use the term ‘reading’ is a bit of a stretch). Here’s what I learnt:
1.) Grazia wants you to buy a pair of £120 earrings that look like spiky cocks. Here’s a picture if you don’t believe me. 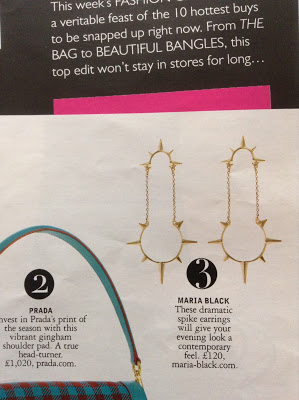 See? Spiky penises.
2.) They think a PVC midiskirt is a good look. I can only conclude from this that yes, they still hate you.
3.) ‘Proper foot candy’ is the new way to describe a pair of hideous iridescent, turquoise blue shoes.
4.) Kate Moss did a lot of things this summer. I won’t list them all, because that would make me as bad as Grazia, who have also chronicled practically everything the woman has worn for the last two months, through the medium of photographs which were (my emphasis) taken without permission while she was on holiday. This is supplementary to an article by Polly Vernon about how everyone should leave La Moss alone when she’s on holiday because she can look how the hell she likes.
5.) Polly’s logic about the Kate Moss is fat slagfest is twisted beyond belief. ‘If, as it is now widely believed, advertising imagery, runway shows, and fashion mags (ahem) are bringing us down and making us hate our own, imperfect bodies – surely we should be celebrating images of Kate in her natural, relaxed and profoundly un-digitally altered state’, says Polly, showing a crushing incapability to analyse the impact of that body fascism has on the psyche. To spell it out: a lack of media diversity as far as imagery of women is concerned, combined with the constant nurturing of feelings of self-loathing, creates a very narrow idea of what a woman should fucking look like. And women who don’t conform to that (especially the ones who everyone assumed were the very definition of female perfection) are going to meet with the kind of wrath Kate Moss met with this month. It’s not difficult. Still, you have to admire Polly for attempting to use what has happened to Kate Moss as a way of justifying her employer’s existence. Top points for shoehorning, babes.
Also: Polly thinks Grazia is a fashion mag, lol. No, guys, Elle is a fashion mag. Vogue is a fashion mag. Love is a fashion mag. Grazia is Closer with expensive handbags. Case in point, another thing I learnt from Grazia this week:
6.) Ashton Kutcher’s real name is Chris.
7.) Jennifer Anniston has ‘gained a few pounds’ and doesn’t give a shit. This is Grazia’s #1 top story.
8.) It’s possible to generate a two page spread’s worth of information based on comparing the hypothetical lifestyles of baby Prince George and the in utero Cowell foetus.
9.) Nicole Appleton is ‘distraught’ following new allegations of Liam cheating. As such, Grazia thought it would be a good idea to ring her mum for a chat about how difficult Nicole is finding things. They’re just so kind and considerate!
10.) I am not very summer 2013. Indeed, my score in the ‘how summer 2013 are you?’ quiz was pathetic. I don’t do cuticle art, I didn’t know that Instagram was so over, and I’m not following the ‘latest diet’ (VB46 – vegan before 6pm). Never mind my degree, I may as well just euthanise myself now.
11.) Summer 2013 also has an ‘official lippy’. The criteria for the title remain vague, however, ‘the ability to fit in with all out summer activities, from beaching to barbecuing’  is a must. 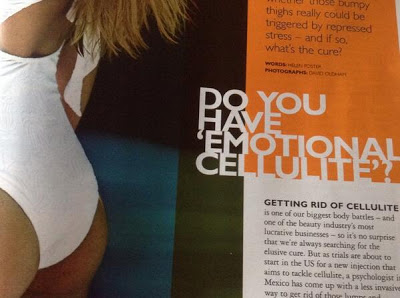 12.) I probably have ‘emotional cellulite’ and so do you (in fact, the only person who doesn’t seem to have it is the model used to illustrate the article, who has a perfect bum). In fact, if you’re one of those FEW BILLION PEOPLE who ‘bloats after eating’, then chances are you have it. Or if you sometimes feel tired. Or if you go for a poo but ‘never feel quite empty’ (ew.)
Cellulite is apparently caused by emotional stress, and can be considered a sign that ‘you are prone to storing anger and punishing yourself’, says Grazia (I promise you, I am not making this shit up.) Those lumpy thighs are probably all because of your childhood, the article continues, drawing on anecdotal evidence with seemingly no scientific basis whatsoever. ‘The people who come to me with cellulite are often over-thinkers and over-worries’, says an acupuncturist, who is apparently unaware that her test group might be self-selecting (if you worry about cellulite, you probs worry about other stuff too.)
It’s ok though, because you can solve this by paying someone loads of money to puncture your thighs with needles while you recite mantras such as ‘I forgive others, I forgive myself. I am free to love and enjoy life’ (still not making this up), or, you know, by just deciding not to give a flying fuck about this horse-shit anymore.
In fact, not giving a tiny rats ass about what women’s magazines tell me remains the number one top thing that I have learnt. It improves my quality of life a millionfold. It may not be very Summer 2013, but I Just. Don’t. Care.
(I do quite like the cock and ball earrings though)

3 thoughts on “You’ve Probably Got Emotional Cellulite, and Other Things I Learnt From This Week’s Grazia”