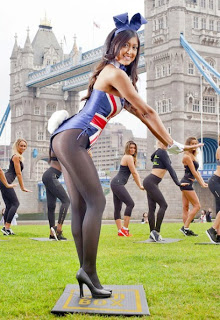 So, I joined a gym. Because y’know, health. My weekend is fry-ups, no sleep, and all the wine. I’ve inherited my mother’s slim frame (shout out to Jeanette!) but was never a PE-lover at school. The only exercise I did at university was horizontal. It’s about time.
After crying into a cake for the amount it costs to sign up to a gym (did I say cake? I clearly meant a stick of celery and some protein shake), I checked out what this exercise thing involved. And who knew that before I even came face-to-face with a cross-trainer, there was so much to get wrong?
Try Googling ‘women exercising’ – go on, I dare ya.

I am not these women. I wouldn’t be seen dead in a crop top for all the cupcakes in West London. My gym sessions test the limits of dry shampoo (personal best: 4 days).
But I knew exercise wouldn’t just be based on stock imagery. I was buzzing because I thought the gym would be full of strong women doing totally badass things. I was going to do weights! It was inspirational.
Then I checked out the classes.
Women’s exercise culture, here’s my beef with you:

I chose these examples because, although extreme, they demonstrate something about the dominant culture surrounding women and exercise. Look sexy doing it; do it so you can look sexy. Now, men don’t necessarily escape this: those going on about ‘leg day’ on my timeline account for that. But the exercise gap between men and women starts at a crazy young age. When I walked into the gym in my boyfriend’s old sweater, I wasn’t doing it right. I wasn’t doing it right when I was desperately trying to shorten my school netball skirt. We weren’t doing it right when we begged the P.E teacher to let us keep tights on under our P.E kits, to hide any leg hair growth (if I could write a letter to 14-year-old me, it would be ‘THRUSH’ in damn big gold letters.)
A straw poll amongst guy friends suggested that most of them exercise because it makes them feel good.  When a group of women were polled on the reasons they exercised, 25 out of 30 sent photos of a little black dress. Bunny Bootcamp plays into the idea of exercise as an endgame in looking sexy for those who already have a bunny bod. And this is bullshit because if that is going to do anything at all, it’ll only be stopping me from doing ‘leg day’ after ‘eat-all-the-left-over-lasagne day’.
Exercise is important – it makes you stronger, faster, healthier. It helps prevent breast and womb cancer. THAT is ten times more empowering than sticking a pompom to your arse and running around Playboy Mansion so Hef can get his rocks off.
Go get sweaty. Do it in a crop top or the joggers you slept in, and all the damn power to you. Splendour in your red-faced hard work. But for the love of all things chocolate, can we stop women’s exercise equating to another expression of sex? Didn’t we already do that with women eating and buying cars and drinking alcohol and, y’know, ENOUGH THINGS?
Let’s take exercise back to something distinctly removed from doggy-style, the 69, and 38GG boobs. Because this culture is discouraging women from doing an amazing thing that can be amazing for THEM – and not just for the men looking at them.
-CB