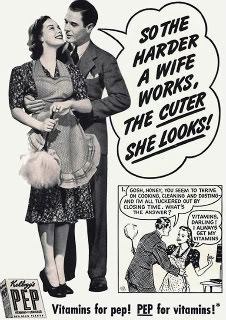 A new book is coming out called ’50/50: How working couples can have it all by sharing it all’, which suggests that men and women are happier if they split the housework equally. This seems so blindingly obvious I’m amazed they got a book out of it: anyone who’s ever had a flatmate knows that cleaning up after someone is not the best way to inspire kind and warm feelings about them. But if you thought this was a simple case of ‘no shit’, then hold your horses: Helena Frith Powell has shown that journalists can basically eke an angle out of anything by making the case against in a Times piece called ‘No, I do not want my husband to do half the housework’.
It opens with an anecdote about how moving to the Middle East saved her friend’s marriage. Frith Powell is a bit coy about what she’s saying here – the implication being that living in a part of the world where traditional gender roles are enforced allows her friend’s husband to carry on being ‘useless at housework’ while ensuring they can stay together. The assumptions here are offensive on so many levels, but since it’s expressed obliquely – as if she or her subeditors were slightly embarrassed by the sentiment – we’ll never really know what’s actually meant.
Then the usual weak arguments about housework come out. Dividing labour ‘sounds like terribly hard work’ and it’s impossible to know if you’ve split a task exactly 50/50. Oddly, this is never used as an excuse in any other joint venture; in the workplace, say, people seem to manage dividing labour just fine. Yes, challenging the status quo can be a bit tiring, but then, so can ingrained misogyny. A major refrain is that men who do housework are ‘deeply unsexy’. She calls them ‘henpecked’ and ‘Mrs Tittlemouses’ to hammer home the ‘housework as emasculating’ point. But no one is sexy when they clean; I would be deeply disturbed if my husband told me he found it arousing when I did the washing up. If she means that it’s her husband’s refusal to clean that she finds sexy . . . well, if selfishness and laziness do it for you, I can’t argue. I just think it’s quite niche.
Another reason given by Frith Powell for why men doing housework is bad is that women don’t want to ‘relinquish their role of CEO of the house’. ‘CEO of the house’ is probably the phrase I hate most in the world. It’s an utterly rubbish analogy: doing the housework is nothing like being a CEO – there’s no wealth, prestige or power associated with it. It’s like calling the milk monitor in primary school ‘CEO of the milk’: just patronising and wrong. It’s doubly useless because CEO generally refers to a figurehead who organises a workforce, not the person doing the majority of the labour to keep things ticking over. Men have found multiple ways of being in charge of stuff without that meaning they have to do the entire thing themselves; are we really saying that if women stopped doing the majority of the housework, they would deservedly lose any last scrap of autonomy in their home?
Then there’s a section about how much Frith Powell loves cleaning her granite kitchen island. She really enjoys it. There are ‘few things more satisfying’. I fear this is probably true, but I think I represent a larger group of people – men and women – in finding housework fucking tedious. That’s why the ‘he contributes in other ways’ argument always falls so flat. There just aren’t that many unpaid tasks in the world that are quite so repetitive, unrewarding and entirely lacking in creativity. Housework’s in a class of its own in that respect. I’d happily take up DIY if it meant I never had to clean the bath again.
The piece ends with a jibe about women who ‘don’t even work’ expecting men to contribute to childcare. Forget the pay gap or domestic violence, this is ‘the real inequality’. If she means women who do literally nothing all day and then expect their husbands to do all the childcare, then yes, I think we can all agree that this is unfair. I’m not sure it’s widespread enough to warrant calling it ‘the real inequality’ but it does sound terribly unjust. If ‘not working’ means ‘looking after the children’ (this really squashes the whole ‘CEO of the home’ thing by the way), then I think it’s acceptable not to want to do it 24 hours a day, 7 days a week. No one, CEO or otherwise, would agree to employment terms that unreasonable.
Men have been in charge of the world for centuries so if it has ‘just turned out’ that a certain task is, in the vast majority of cases, being performed by women, I think it’s safe to assume that that task is not an interesting or rewarding one. It seems to me much more likely that the world’s labour has been divided so that women do the majority of the drudgery unpaid while men can get on with the lucrative fun stuff, than that women just have an innate love of cleaning products. If this skewed division of domestic labour happens to have worked out in your favour (because you find misogyny sexy and you like cleaning), then that’s a lovely, happy story, but let’s not pretend it isn’t a giant setback to all other women everywhere. Enjoy cleaning your kitchen island, but please stop supporting a system that expects all women to do the same.
- KMB

4 thoughts on “This Week In ‘NO SHIT!’ News: Splitting the Housework is a Good Thing (So ignore Helena Frith Powell)”