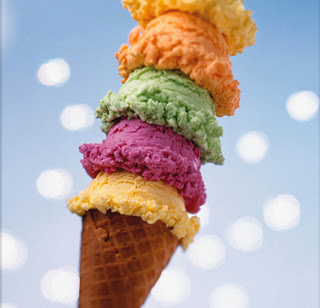 I should support real jobs. I should enjoy meeting new people. I shouldn’t be avoiding the checkout guy who tried to chat me up, when I was shopping solely for paracetamol, tissues, nose spray, and cough medicine. (Seriously, dude, choose your moment.) But there’s something that freezes out all my principles, and sends me spinning into the arms of the automatic scanner. Something that makes the self-checkout machines irresistible.

As a young, apparently single, obviously female person, there used to be no way I could buy ice cream without meeting as many judgemental glances as there are flavours of Carte d’Or. A girl stocking up on ice cream is always assumed to be single and sad. Because frozen ambrosia only tastes good when you don’t have the sweet, sweet taste of a man’s kisses to replace it, right? Or something like that.

The idea of the lonely gelato-guzzler is astonishingly persistent. It’s pushed by pop culture from every angle. Romcoms play ice cream as an understudy to your handsome prince – the kindly, tubby friend who’s there when the Real Man leaves. Adverts show us the sexy side, offering a Calypso or Cornetto to fill the gaping void of loneliness. This isn’t just silly and annoying, it looks like bad advertising too. Surely no one would want to replace a significant other with something rainbow-patterned and covered in sprinkles. I’m starting to worry about what they’re actually putting in my Magnum. And it’s only a matter of time until we see the first frozen frivolities in Ann Summers…

Attempts to avoid such a bizarre stereotype have been many and various. Some women deny eating ice cream at all; I suspect the craze for frozen yoghurt is because it sounds hip and yoga-compatible (froyoga, anyone?), rather than homely and lonely. Others try concealment, even downright deception. A friend’s been to known to describe, in exquisite detail, her polyamorous live-in relationship with two dashing young blades known as Benjamin and Jeremiah. (I like to imagine Mr Haagen-Dazs as their rich uncle, with a top hat and a monocle.)

Until the revolution comes, I myself cast a surreptitious blessing on the clunky cashier-robots lining the walls of the supermarket. All they see are barcodes and pin machines. The only judgements they make involve brand comparisons; their speakers don’t include suggestive snigger circuits. The closest they come to imagining our sex lives is ‘unidentified object in bagging area’.

But using technology to avoid other human beings can only be a temporary solution, and all this pretence is a bit too much effort. Rather than waste any more time feeling embarrassed, we need to bring out the big feminist guns. Chauvinist Chip ice cream has two ingredients: the assumption that all women are the same, and the assumption that they all need looking after. It’s a fatal mistake – not to mention sexist – to see women as one homogeneous vanilla-flavoured mass. We all have our own reasons for eating chilled caramel concoctions, and we’re not interested in others’ opinions of our relationship statuses or our flavour combinations.

If I see a man at the checkouts buying deodorant, I don’t assume that he’s surrounded by gorgeous young women and followed everywhere by subtle muzak. Nor do I feel the need to look impressed and whisper ‘Cor!’ as he breezes past me in a rancid cloud of leopard hormones. This is because we, as human beings, are capable of separating screen from reality. It’s also because we, as human beings, are theoretically capable of minding our own damn business. We’re just not trying hard enough.

We can change popular stereotypes by talking to advertisers, talking to film-makers, protesting people who reduce women in all their glorious variety to the status of generic film extras. We can call people out – including ourselves – when they make foolish and lazy assumptions at the expense of reality or politeness. We can buy what we want to buy, without shame, whether we pay into a coin slot or a cashier’s hand. Heads held high. Flake 99s in hand.
-CK

One thought on “Who Is Ice Cream REALLY For, Anyway?”