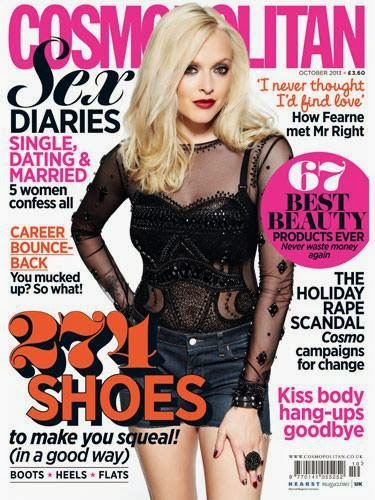 ‘You can lie to your relatives at Christmas dinner and tell them everything is peachy on the home front, but you can’t lie to your vagina’
- Olivia Wilde, via Cosmo.
It’s been a while, ladybros, but I’m back with some more brain-invading Cosmosis, and luckily for you the October issue of Cosmo is a real treat. Where else would you find an interview with Fern Cotton (‘how Fern found Mr Right’) alongside ’271 shoes to make you squeal! (in a good way)’? Certainly not The Economist.
The Cosmo version of femininity is deffos an odd one. I’ve never met a woman who’s squealed over even one single pair of shoes, let alone 271. It sounds noisy and exhausting. As does having 330 minutes of sex in order to burn off a large Kit Kat, a fact Cosmo editor Louise Court helpfully informs us of in ‘things I learnt from this month’s Cosmo’ (‘Just saying…’ she writes, without really telling us what she means. Just saying what? That I’m a fat cow whose enjoyment of chocolate is something which must be countered with nearly SIX HOURS of rutting and chafing? Thanks, Lou, glad you’ve got my back.) Turns out, however, that Louise Court doesn’t even read her own magazine, because on page 217 I’m informed that it’s actually 30 mins, so now I don’t know what to believe. However, such is the labour involved in being a fully paid up member of the Cosmo crew, that I find the former stat more persuasive.
In fact, after reading this month’s issue, I have become convinced that the whole process of being a Cosmo girl just sounds fucking knackering, and here’s why:
You have to ask for advice on bloody everything
Lollypop sprinkles is wondering why the guy she’s been dating hasn’t asked to rearrange their third date following his cancellation due ‘to something coming up’. Thankfully, Cosmo readers are on hand to offer illuminating advice so that Lollypopsprinkles doesn’t have to endure the indignity of a direct, face-to-face question. ‘He didn’t tell you something had come up until after you asked what was happening – it seems like he was hoping [the date] wouldn’t be mentioned’, says Sparklesfaerie authoritatively (incidentally, I am 100% convinced that these online identities are fabricated. No one has any business walking around in 2013 with the internet moniker Sparklesfaerie. And this is coming from someone who used to have the email address magicalpunkpixie@hotmail.com). I mean, FFS, Lollypop spinkles, do you have someone come in to dress you in the morning as well, while you just lie in state? Grow a fucking pair and ask the guy, you stupid fictitiouous woman.
You’re supposed to ‘Live Big and Go For It’
I’m not quite sure what ‘living big and going for it’ actually entails, but it seems to be involve wearing a bomber jacket with nothing on underneath, plaid, and probably more squealing.
You have to care what guys think of your outfits
I haven’t met many women who care what their boyfriends/male friends think of their outfits, and indeed fashion blogger The Man Repeller has carved a whole career out of not giving a flying. Yet in Cosmoland, John, 25 from Newcastle thinks that Solange Knowles’ dress ‘might seem a bit tarty in the pub’, and James, 24, Cumbria (‘is in retail and in a relationship’ – double whammy) thinks Jessie Ware’s hoop earrings ‘lack class’. You hear that, you bunch of tarty common sluts? You disgusting, chavvy ho-bags.
Sisterhood means telling other women they’re beautiful
Says hair stylist Ken Paves, author of new book ‘You are beautiful’ (another man who seems to think it’s his prerogative to comment on our looks). ‘So many women compete over looks’, says Ken, ‘but lift each other up instead and, guaranteed, you’ll feel beautiful’.
After vomiting profusely for several minutes, I take the opportunity to consider whether or not having beautiful friends makes me feel more beautiful. It doesn’t, especially. Not that that stops me from complimenting them. I tell them all the time. ‘Your tits look GREAT’, I’ll say to my friend Holly. ‘All big and bouncy’, and despite my best hopes, the size of my breasts remains EXACTLY THE SAME.
You’re supposed to talk like a moron
You have to ‘prep like a pro’ so that you look ‘instaglam’ while scouting for ‘lust-haves’ and being careful not to let ‘the rise of the love square’ make things too complicated in your relationship, and you’re demanded by law to refer to every celebrity by a rubbish nickname (the latest is K-Pez) which is always said pseudo-ironically in case anyone mistakes you for an actual twat. Oh, and don’t forget to ‘sculpt like a rock star’ while you’re at it.
Your emotional life is both complicated and completely prescriptive
Take the ‘get-over-him grid’. Time was that post-breakup healing was just a matter of getting to the point where you felt like you could wash again (aka, as long as it takes), but now, you’re supposed to examine this chart thing instead which tells you just how many years of misery lie before you. Apparently, if you’ve been engaged for under 1 year, it can take you up to double time to get over it, but if you’ve been engaged to someone for under a month, it’ll take you a whole fucking year to recover. And if you’ve been co-habiting with someone for 1-5 years, it only takes you time and a half. Wtf? Meanwhile, if you’ve been in a friends with benefits relationship with someone for more than five years, it will only take you half that time to get over it, and…oh, forget it, here’s a picture of the stupid fucking chart. 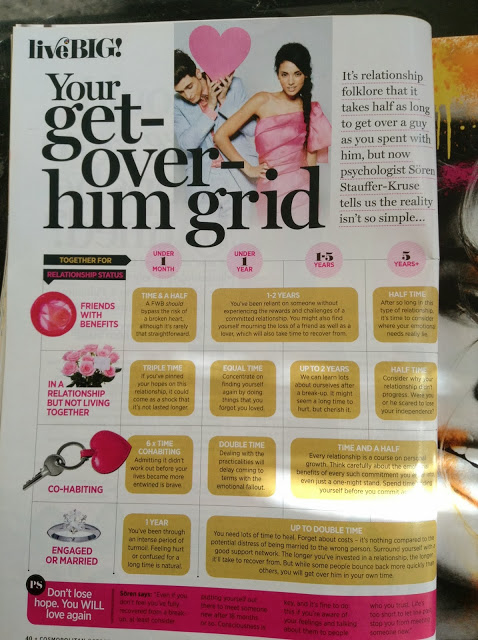 You have to get excited about handbags
According to ‘new research’, wanting things like handbags gives you a dopamine rush in the brain. Cosmo extrapolates wildly from this by using the headline ‘It’s fine to
Plus, on the picture of the man, Cosmo once again shows its determination to reduce every aspect of human experience to the process of consumption ‘Hmmm…wonder how much he costs’ they say. HI-LARIOUS.
You’re supposed to care about Fern Cotton’s love life
I mean, I’m sure she’s lovely, but I really don’t care about how at 29, she thought she’d never find love. ‘When one door closes, another opens’, she says. ‘soon after, I met the love of my life and got to have a baby’
*SLAMS ALL THE DOORS AND WINDOWS SHUT*
You’re allowed to care about important issues too, such as British women being raped abroad, but only as long as they’re inappropriately illustrated with a picture of some girls’ bums 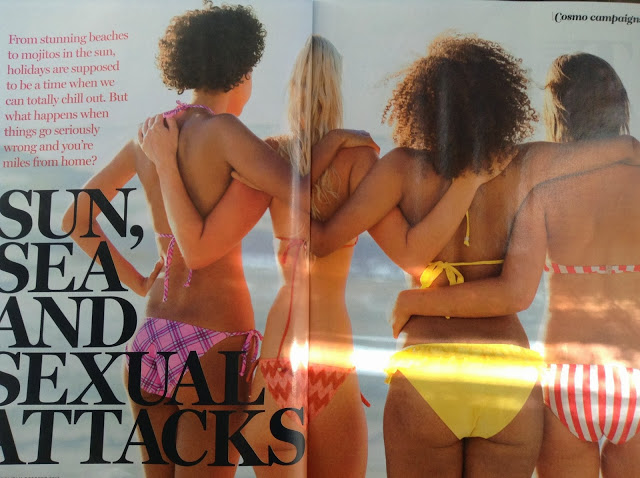 You’re supposed to find Ryan Reynolds charming
‘As if we needed ANY MORE REASONS to love Mr Reynolds’ simpers Cosmo, as my will to live shrivels and dies. What follows is some of the most charmless soundbites I’ve ever seen committed to paper, including the ‘is this really ok in 2013?’ shocker that is his admission that ‘he’s not as smooth with the ladies as you’d expect’ because ‘when I was 18, I looked like a Vietnamese girl.’ Lovely.
You have to climb ‘inside men’s minds’
Specifically, that of tedious snoozemonster Simon Feilder, who is supposedly a comedian, regaling you with tales of his internet dating experience. ‘They’re all nice people, but none has escalated to Sunday Fun Stuff, which is my benchmark for dating success’, he writes. ‘Think croissants in bed, walks to the pub for lunch…but I’ve learnt to spend two hours with a stranger which is achievement of sorts’. Firstly, Sunday Fun Stuff? SUNDAY BUM FLUFF MORE LIKE SIMON. Secondly, whether or not his dates were also able to endure those two hours is a topic of some contention, but from the liveliness of his copy, I’m thinking: not.
You’re constantly analysed from an evolutionary perspective
If cavepeople did it, then chances are you did it too. Much like the discovery that the theory that women’s ability to conceive drops off after the age of 35 was actually based on a study of women who lived in EIGHTEENTH CENTURY FRANCE, historical bollocks is constantly wheeled out as a way of justifying certain archaic attitudes towards women and relationships. This month, it’s ‘Why a man can’t give up his exes…’ ‘Evolutionary psychology has shown women are more likely to suffer emotional jealousy about ex-boyfriends, whereas men feel more sexually jealous’ waffles some staff writer. Men apparently stay in touch with their exes because ‘it’s about marking his territory’. Basically, men are essentially big tomcats, pissing all over the shop, while women are sexless, weeping wet blankets who find seeing their exes happy and in new relationships really ‘hard to deal with.’ It’s OK, though, you take comfort in examining every minute detail in your relationship for signs of cheating ‘warning bells’.
Your ambition is quashed
This month, Cosmo asks ‘what’s wrong with being average?’ Perhaps it’s time that we start ‘embracing average’ in order to ‘take the pressure’ off ourselves. So inspirational! So motivating! So…Cosmo.
You’re supposed to feel guilty about stupid shit
In, the Cosmo mugshot booth, Cosmo staff ‘confess’ to such ‘crimes’ as ‘I pop to the shops in my PJS’, ‘I wear my make-up to bed’ and ‘I eat leftovers for breakfast’. The lasting impression is of course deep shock at the antics of these wild-partying, rebellious animals. The whole thing is so anodyne as to be actually really frigging offensive (and yes, I’m aware that’s an oxymoron), and reminds me of the Amy Schumer gag where she’s coerced into a game of ‘truth’ with a load of Conneticut Stepford Wives and ends up telling them that she once let a cab driver finger her.
Another thing you’re supposed to feel guilty about is drinking alcohol because like, carbs and calories. Thankfully, some poor cow has come up with a solution: inhaling the stuff. It’s called Vaportini, and it’s being touted as a viable alternative. Really, its like sitting in a tray of spaff and saying it’s the same as sex, and all it did was make the numb-lipped Cosmo writer feel ‘a bit tired’. Party on.
You have to care about how often other women have sex
See: ‘Real Women’s Sex Diaries’, where two women in relationships wearing nothing but a sheet talk about how they do it like, ALL THE TIME, and two single girls also wearing nothing but a sheet talk about they never do it. Revolutionary.
You make excuses for his incompetence
According to Sex Therapist Rachel Morris, a man can’t actually GIVE you an orgasm, he can only ‘facilitate your having one’. Mmm, that’s some sexy shiz…facilitate my orgasm, baby.
Seriously, though, the problem is probably yours, and Morris recommends some good old-fashioned self-examination to get past her correspondent’s ‘failure’ to achieve orgasm (note the emphasis, NOT her partner’s failure to provide her with one). ‘Do you give up before he does?’ she asks, ‘Get impatient?’ Yes, it’s all your stupid, demanding fault.
Similarly, in ‘Why I never use the C-word’, one writer explains that she doesn’t enjoy cunnilingus because ‘I’ve never been relaxed enough to orgasm via oral.’ Um, maybe the problem isn’t with you love?
But off course the problem is with you. The problem is always with you. You’re a badly dressed, frigid, average mess who eats far too many calories, doesn’t tell her friends they’re beautiful enough, and looks way too tarty and common in the pub.
Oh, and to top it all off: POPCORN ISN’T EVEN THAT GOOD FOR YOU.
Shit.