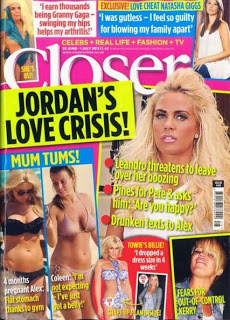 There are two main reasons that I bought Closer magazine this week, one of which was the cover line ‘BIZARRE REAL LIFE: My boyfriend dresses as my twin sister!’ Like, does it mean that he dresses as if he were her twin sister or does it mean that he dresses exactly the same as her current twin sister, meaning that whenever they go out they actually look like triplets? Is this woman the ultimate narcissist? Or is she so generic-looking that anyone would look like her twin sister if they wore her clothes? Is she, in fact, the everyman?

4 thoughts on “The Top 1,000 Reasons Not To Buy Closer Magazine”