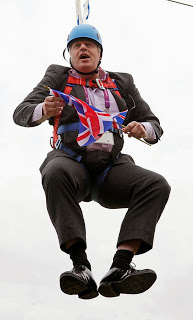 Terrible news for all kindred spirits who have used the early closing time of the Tube to bolster your romantic relations: it has been announced that the London Underground will run for 24 hours at weekends by 2015. The lines that will run a service after midnight are restricted to the Victoria, Jubilee, and certain parts of the Central and Northern lines – so if you live in Hammersmith, Wembley or Harrow and Wealdstone, you’re still safe to make that age-old ‘Damn, the last tube has left and who would ride the night bus?’ excuse. But if you’re in Brixton, Mile End or Kentish Town, be prepared to be more upfront with your previously veiled one-night-stand proposals, or face a sexless future of trudging past vomit-laden benches on your way to a creepy half hour ride with a passed out City worker, a couple of poor sods doing night shifts, and the requisite 3am Bunch Of Lads.
For such a notorious philanderer, Boris has been horrendously gung-ho with Londoners’ sex lives ever since he got into power. The ban on alcohol on public transport once prevented me from having enough Dutch courage to make a move on a guy I fancied, and I’ve never forgiven Bo-Jo for this indirect slight. Meanwhile, his opposition to spending money on St Patrick’s Day celebrations – which he famously branded ‘lefty Sinn Fein crap’in 2012 – put him firmly in the Fun (and therefore Sex) Opposition camp (along with Iain Duncan Smith, possibly the least fun man known to ever don a suit). And that’s nothing compared to what his dishevelled appearance at the 2012 Olympics and regular sightings of him riding a Boris Bike in skin-tight clothes through the city have done to quell libidos everywhere.
For every delightful outburst in which he entertains us all by referring to his opponents as something hilariously creative (such as ‘greatsupine protoplasmic invertebrate jellies’, aimed at members of the London Assembly), Boris has brought in a cataclysmic change that has affected all of our abilities to couple up. Perhaps the most dangerous thing about these so-called policies is that they are steeped in rhetoric about ‘transport’, ‘safety’, ‘sport’, and ‘public health’, when we all know exactly where his beef lies: with his lowly subjects’ sex lives. Boris’s beef is in your pants.
There is scope for recovery from the damage that the 24-hour tube might do for your sexual appetite: cuts to ticket offices mean that, in all likelihood, the stations will be both woefully understaffed and especially overpopulated by unsavoury characters during the earliest hours of the morning. As safety records plummet, riding the night time underground service will become a terrifying feat, and the perfect excuse to ‘stay on the sofa’ belonging to the object of your affections. Bo-Jo was quoted in The Independentas explaining his decision on 24-hour underground transport with a cardiological metaphor: ‘For 150 years the Tube has been the beating heart of London, its tunnels and tracks providing the arteries that have transported millions of people and helped to drive the development and economic growth of our great city.’ But when the arteries start haemorrhaging with people up to their eyeballs in Ecstasy who are straight out of Fabric and intent on stroking everyone in the carriage, there is only one possibility: bloodbath.
Despite promises to the contrary, then, I urge all right-thinking Londoners to stay in their homes or the homes of others when the opportunity to travel late comes up in 2015. Don’t let a fluffy-haired politician tell you otherwise: you deserve the excuse you’ve used since those heady days at university. And look forward with bated breath to the London mayoral elections in 2016, where, in all likelihood, Johnson will not be standing again as a candidate, and you can vote sex-positive. Only then will the passionate advances of all Londoners be safe, protected from the spectre of an ex-Bullingdon Club member dangling over our capital city on a zipwire with two Union Jack flags, perennially ruining your chance of getting off.

8 thoughts on “How Boris Johnson Has Ruined Your Sex Life”