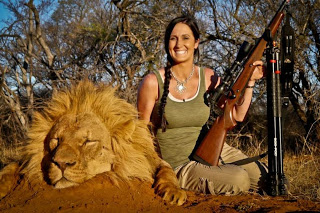 For those of you who have had better things to do with your time than monitor Twitter obsessively over the last few days, please allow me to explain the shit that has been going down in SA. Melissa Bachman is an American TV presenter, well known for her love of hunting; a self-proclaimed ‘huntress’ since childhood. Last weekend, she posted online a picture of herself posing with an apparently dead lion that she shot during a canned hunt in South Africa.
Before I even begin to address this subject, I would like to point out that this is categorically not a defence of Melissa Bachman’s beliefs or actions. I disagree entirely with canned hunting, and looking through the photo gallery on Bachman’s website made me feel nauseous and deeply saddened. However, putting my personal convictions on animal conservation and cruelty aside, I think it’s important that we recognise that many of the responses within this public backlash seem to have little focus on the issue in hand – and much more on Bachman’s gender.
Countless extremely violent, sexist and misogynistic responses have sprung up all over the internet in the short amount of time since Bachman’s gruesome lion corpse photo made its way onto social media websites.There have been some strong opinions voiced online about how Melissa should be dealt with. Here are some ‘fun’ and ‘helpful’ suggestions put forward by Twitter and Facebook users in the first 24 hours in which the story broke: 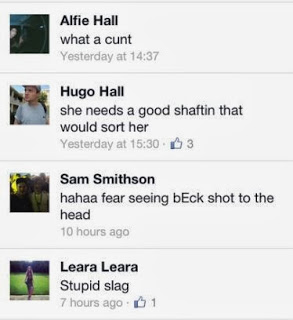 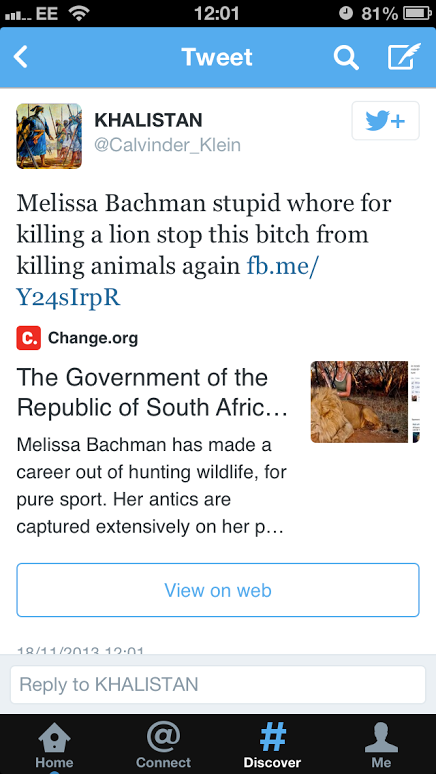 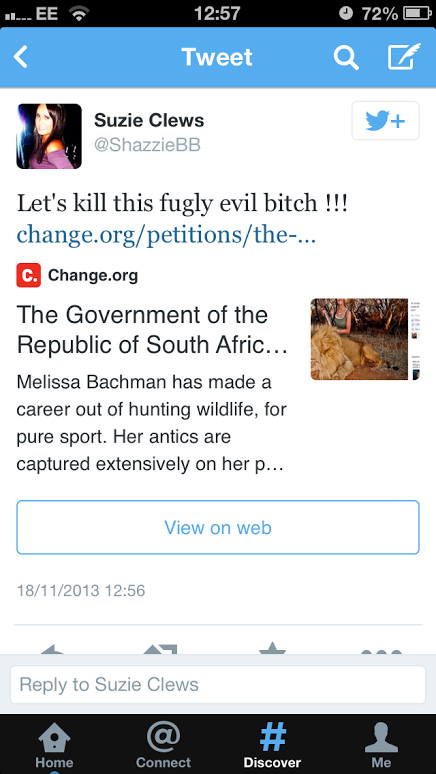 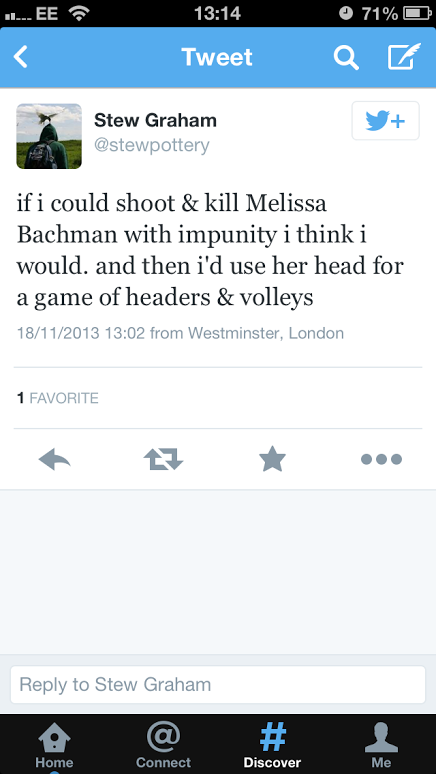 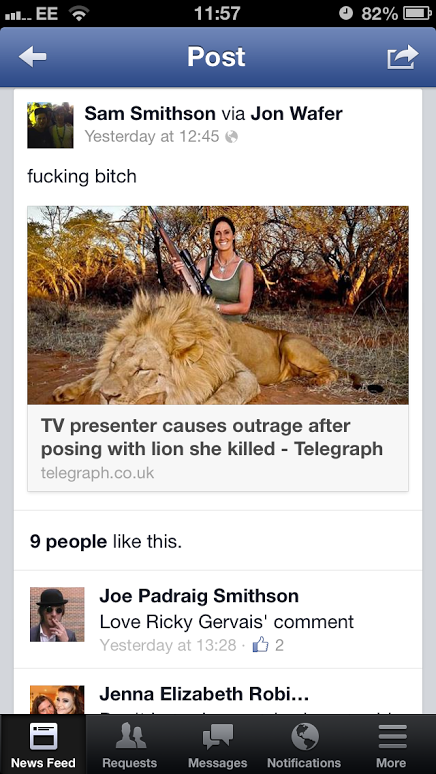 Better still, why doesn’t everyone opposed to hunting wildlife form one huge lynch mob and track Bachman down? Once we find her, a gang rape and beheading should do the trick. Her decapitated head could then be displayed in a visible, public spot to serve as a warning to all those other EVIL WHORES who might be tempted to go legally shoot a lion in South Africa. Fortunately there are some more generous hearted souls out there who are willing to look past Bachman’s recent indiscretions: 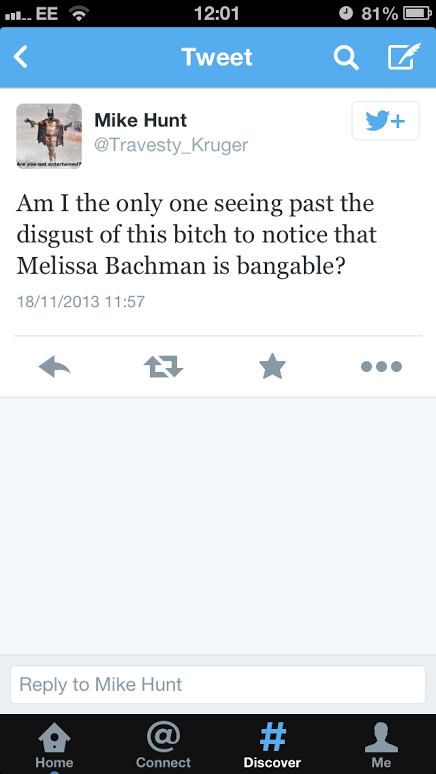 I know we shouldn’t have to do this thought experiment, but let’s just consider for one moment that Melissa Bachman was in fact a man. Let’s call her male counterpart Michael. Michael posts a photo of himself grinning proudly next to a dead lion he has just stalked and slaughtered. How many of the outraged online responses would suggest that the best way to teach him a lesson is to rape him? Would there be many tweets lamenting that he may have no moral substance but ‘hey, I’d tap that’? How likely is it that he would be referred to as a ‘bitch, ‘whore’ or ‘slag’? WE ALL KNOW THE ANSWER, PEEPS. So why is this spew still going down?
It is probably worth mentioning at this point that canned hunting is actually legal in South Africa. That’s right folks, the stalking and slaughter of lions in South Africa is, like, totes legal and A-OK in the eyes of the law. Despite what the moral or ethical implications might be, Melissa Bachman hasn’t actually done anything wrong as far as the Republic of South Africa’s justice system is concerned. She legally entered the country, legally took part in a canned hunt, legally killed a lion and legally posted a photo of the dead lion on the internet. Perhaps that’s what everyone should be taking issue with.
If you are upset by canned hunting, as I am, then there are things you can do outside of social media misogyny. Join a movement, start a petition to ban hunting, write to government officials, campaign for animal rights. At the time of writing this article, over 97,000 people have currently signed a petitionto ban Bachman from entering South Africa ever again. But what exactly do those 97,000 people think that it will achieve to stop one specific person entering one specific country? Lion hunting and the hunting of many other wild animals will continue in South Africa and other countries regardless. Hunters, male and female, will continue to visit South Africa and hunt for fun. It wouldn’t hurt us all to be a teeny bit less myopic.
Collating lions with rape really shouldn’t be something we’re still doing with 2013 – and it sure as hell won’t save them. And as Tina Fey taught us, but we still apparently need to hear, calling someone a ‘fugly bitch’ can only get you so far.
-KB

5 thoughts on “Is Melissa Bachman A Fugly Bitch For Killing A Lion?”