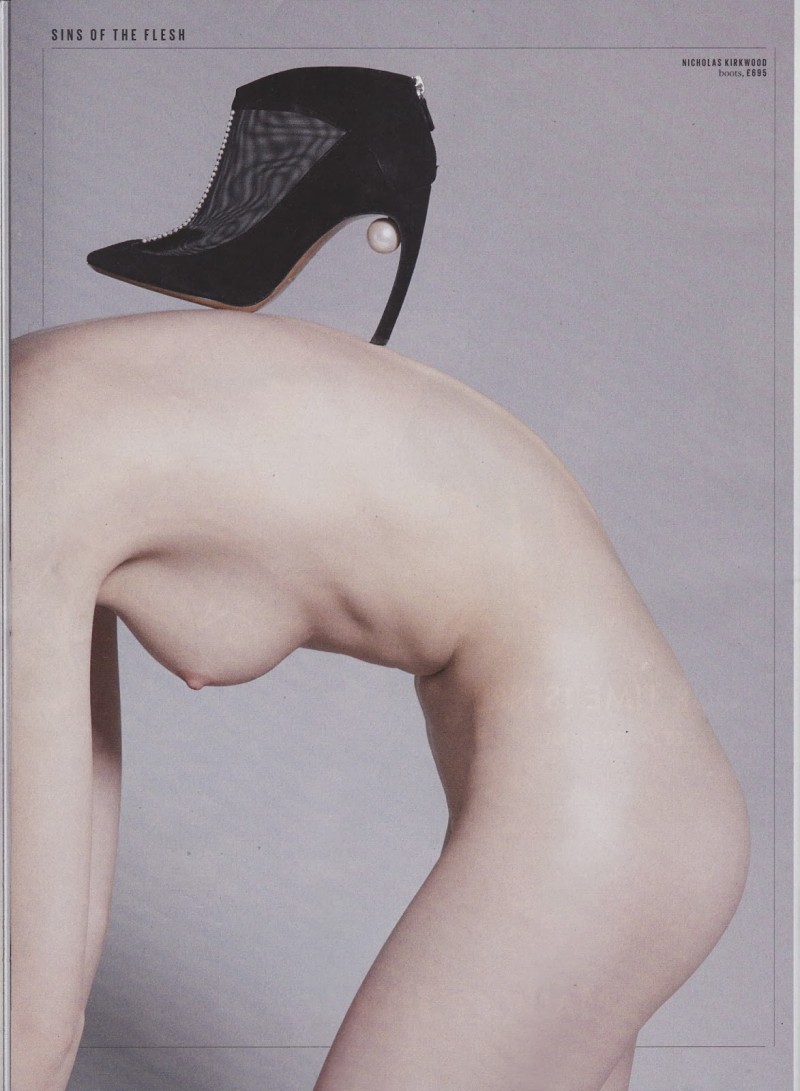 What with The Sun being the country’s best selling newspaper, coming face to face with bare boobs on public transport is hardly a rarity, though I have to say at least The Sun doesn’t lop off their owner(s) faces. Last week I was treated with this lovely image from the Evening Standard’s Deluxe Magazine. It’s a nude woman bent over to form a kind of table for a £695 shoe. This is accompanied by images of a clutch resting on a vagina, and a handbag sitting on an arse. It’s reminiscent of this awful Details shoot from a few years ‘back:

You might say that there’s not much point in my harping on about nudity in magazines. Whether it’s Tom Ford’s notorious 2007 men’s fragrance adverts photographed by Terry Richardson (who else?), or just about anything that American Apparel has ever produced, the idea that ‘sex sells’ lives on, and it doesn’t look like that’s going to change anytime soon. But then this spread is different. It’s not sexualised in the way that the Tom Ford advert is with all it’s oiled up, boob-squeezing and bottle-straddling, but there’s something pretty disturbing about it nonetheless. Objectification doesn’t begin and end with sex, after all. 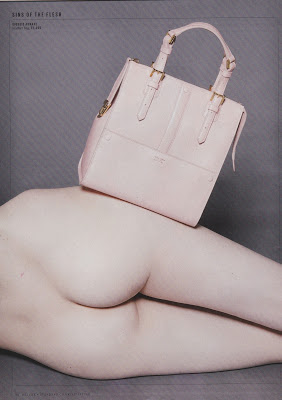 Once I’d got over the slight amusement at the idea that we should ‘bare all to show off the season’s most luxurious accessories’ (that’s right ladies, when you spend that much on a handbag the best way to wear it is in the buff!) I was left quite freaked out by these images. The body in the spread has been so dehumanised through the lack of face in any of the shots, and through the positioning of the body as a prop, that it resembles a piece of furniture. This woman’s body has been objectified to the point that it’s no longer the object of the photograph, rather a nice background to draw the eye to a ridiculously expensive bag.
Of course, this isn’t the first time that women’s bodies have been used in this way in magazines- Carrie Scott wrote in the Independent about the models in a Balenciaga ad campaign had been transformed ‘into mostly headless, always faceless sculptures on which to lay clothes, ideas and indeed fetishes.’ In the ads in question though the model isn’t naked, her face is cut out from the shot in a similar way, her decapitated body forms a perfect seat for the handbag that is the focus of the advert. 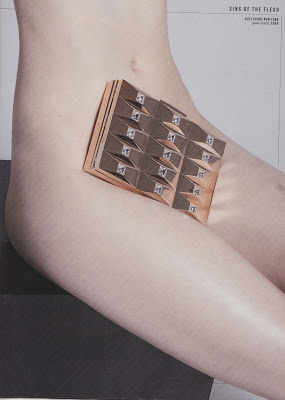 I get that this can all seem very edgy, but why the hell is this the way that magazines and brands persist in targeting women? It must sell for them to continue doing this, and there apparently seems to be the view that women will buy into their own objectification. This spread was included in a magazine that is clearly targeted at women, so at some point in the production process the people that put it together must have thought that women want to see their bodies portrayed this way,  as cold, lifeless, airbrushed to the point of looking like marble, and merely a place to hang luxury goods. Combined with the trend for depictions of violence against women in adverts, this creates a worrying picture. Do we really buy into this shit? Is the normal response to the image of a woman dead in a car boot to rush out to buy the Jimmy Choos that she’s wearing? I really hope it isn’t, but it’s starting to look more and more as though it is.