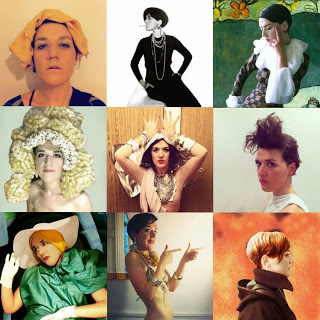 I take selfies like Coleridge took opium: daily and in vast quantities.
Not out of vanity. I am, after all, a woman who thinks nothing of talking to someone she fancies while wearing potato-printed pyjamas, a sheepskin coat, size 13 wellies and pouring coffee into my starkly un made-up face.
No, I take selfies because – like some hideous Baudrillard mutation of the internet age – I want to know that I exist.
I, like so many others, am constructing a sense of self, of identity and esteem by showing my raw and naked face to strangers, in the hope that their reaction will finally allow me to see my face as it is. As it really is. Without the ever-present, distorting prism of my own self-doubt.
I say naked. Often these pictures see me covered in soil, with a slice of bread in front of my mouth, with oranges for hair, wrapped in a bin bag, with a mop on my head or wearing a beard made of discarded tea leaves. But their intention is naked. It is shameless. It is to weave a tissue of self-image from the contending strands of persona, politics, posing and props.
I started taking photos of myself, in earnest, two years ago. With help, of course. You can see me dressed as Lady Gaga, as Rocky Balboa, as Grace Jones, as Andy Warhol. My blog, Goppeldangers, may have started life as an exercise in creative, comic construction, but it has grown into something greater. I study my idols, mark their beauty, wonder at their confidence and then try, hopelessly, to emulate it using nothing more than a smart phone and the objects strewn about my cold and cluttered flat.
I spend much of the time taking selfies dressed as men. Firstly because it’s funny.But secondly because, as a woman, I often feel more innately female, more feminine and more attractive, behind the guise of masculinity. When I stuck the contents of a rooibosch teabag to my chest and lifted a hammer to camera I felt, not only like my father’s daughter, but irrefutably like a woman. When I pad my underpants with socks and flex my biceps it is with the hope that I won’t look like Macho Man Randy Savage, but like a woman, trying to look like Macho Man Randy Savage. When I bare my hairy armpits, quiff up my hair, cling film down my breasts or don a suit it is not because I think I look like Schwarzenegger, Morrisey, Gazza or David Byrne. It is because I hope I don’t.
When a stranger in the wilderness of Tumblr comments tells me I look ‘handsome’, ‘fit’ or ‘hot’ in these selfiesI can accept the compliment, because I don’t have to view it straight on. I can, instead, snatch a sideways glimpse atsomething hiding behind an artifice. I am able to see a Nell Frizzell that, in mirrors, is little more than a loose collection of beaky nose, hanging chin, wild eyebrows, disappointment and dismay.
Of course, in some of the hundreds of photos I post to Twitter, Instagram or Facebook I am not dressed as other people at all. I am, apparently, dressed as me. But it is a me that is swimming in the sea, climbing rocks, standing on mountains, running across marshes or clambering, spray-soaked, behind waterfalls. My Facebook timeline is swollen and glutted with pictures, taken with my own shaking hand, of me doing something I consider impressive. Heroic. Epic. They are, in that sense, just as much a narrative construction as the costumed ones. But they serve the same purpose.
By offering up my image to strangers, anonymous critics, forgotten friends and long-forgotten enemies, I am trying to elicit something, anything, that will make me feel fixed. Make me feel corporeal. Make me understand how I look and what other people see.
Of course, it doesn’t work. Not really. The term ‘selfies’ may have crept its way into the Oxford Dictionary’s word of the year. But that doesn’t make the subject of those selfies any easier to define. I still struggle to bring to mind a static, singular vision of what I look like. I still wonder if people think I’m attractive. I still wonder if I look like anyone in my family.
But at least, from behind the lens of my self-directed focus, I can picture myself. If only for a moment.
-NF

One thought on “The Power of the Selfie”