Does ice and snow get you all hot and bothered? Do gale force winds blow your mind? Does the promise of constant hard and heavy rain get you dripping we-… well, you know what I mean.

No? Well, that’s odd. Because I think you’ll find that winter is an extremely sexy time of year.

It kicks off with Halloween. We all dress up as our favourite animal, but as we imagine they’re seen by a potential mate – cats in fishnet stockings, mice in corsets, guinea pigs in high heeled shoes – and head out into the dark. Consider, for instance, the ‘sexy shark’:

Just one week later, we stand in parks and wave sparklers, wearing dresses that accentuate our Catherine Wheels. Next up is the pinnacle of the sexy season – it’s Christmas. Yes, apparently it’s time to dust off that highly flammable velour Mrs Santa costume that we just knew we’d get so much wear from, and start straddling his oiled-up turkey baster (Such outfits only really work if you’re Katy Perry and there’s absolutely no risk of you making contact with any sprouts while wearing it. But feel free to enjoy this Ann Summers’ version, complete with ridiculously teeny tiny hat.) 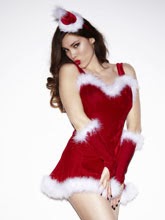 Just when you think you’re spent, New Year’s Eve comes around with the annual challenge of looking both insanely hot while wearing something more sparkly than the Sainsbury’s Basics Cava vomit you’ll bring up after midnight in a deluge of tears and mini salmon quiche canapes a wonderful magical (sexy) fairyland. Such as this NYE 2013 recommendation from the Huffington Post: 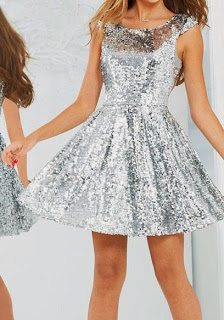 Yeah, no. Didn’t think so. If you’re anything like me – i.e. hardly ever turned on by Code Red weather warnings – you’ll be happy if you can just get through the whole winter without losing one of your gloves. Losing your inhibitions in a sexy shark costume is not on the menu. In fact, the only thing on the menu should be what’s ON the menu: chocolates filled with gooey substances, Christmas puddings so drenched in alcohol that they remain on fire for hours, roast potatoes slathered in some kind of lard. Pretending that the wife of a fat, white-bearded old battleaxe who spends all year commanding elf slave labour in a factory where it’s always cold would be sexy, scantily-clad and always ‘up for it’ is one fantasy step too far.
Women, we need to face the facts: winter is the least sexy of all the seasons (closely followed by summer – too hot; autumn – too leafy; and spring – we lose a WHOLE HOUR’S SLEEP, so screw it.) This time of year is not the glam-fest that advertising and glossy magazines would have us all believe. It’s just three nippy months, in which I spend most of my time tucking thicker and thicker tops into my tights.

Here are some examples of winter-based marketing that do not speak to me:

Dress up like a disco ball for your Christmas party and dance ‘til the small hours!

No. NO NO NO NO. This is the party I’ll inevitably leave early because I’ve got a stomach ache from eating too many sausage rolls. I’ll be home by half ten. The only small hours-based dancing to be done is the onesie jig when I need the loo in the middle of the night then realise that extricating myself from that soft, soft material actually takes effort.
Party the night away this New Year in a dress that barely covers your unmentionables!

Yeah, could do. OR I could stay in and see what happens if I melt a whole bag of marshmallows into a hot chocolate.

Be his ideal stocking filler by dressing up as a naughty little elf!

To be honest, I think he’d prefer a DVD. And didn’t all the naughty elves get fired.

Heat up those chilly winter nights by surprising your man with this transparent chemise!

Well, yes, that will surprise him, but mainly because I’ll be wearing it over my pyjamas. So he’ll be like, “What’s that weird plastic-bag-type thing that’s obscuring my usual view of Eeyore in an igloo?” And I’ll be like, “Transparent chemise. Pass my book.”

Advertising and catalogues are valiantly persisting in telling us that winter is the height of sexual awakening and we’re doing it all wrong. I admire that sort of dedication, I do, but the fact remains that this is just not a sexy time. It’s a time for wearing 100 denier tights, sitting under a blanket, and burning ourselves on hot water bottles because we were using our dominant hand to stuff another cinnamon donut into our awaiting mouths. There are animals that go into hibernation during these godforsaken months. We’re still awake. This should be celebrated as an achievement in itself, rather than a reason to hang suspenders off us.

You can show me as many pictures of girls wearing festive lingerie as you like. You can try and convince me that I need to wrap myself up under the Christmas tree and beg for the next passing man’s baubles. You can throw all the supposedly guilt-inducing flat stomachs and cheekily raised eyebrows at me, tied with a bow. 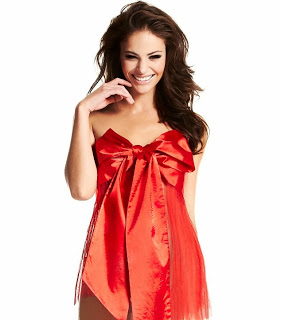 But you know what? I know that as soon as that shoot’s over, this model will be back home in her slippers with her bum pressed against the radiator like the rest of us.
Viva Yuletide, the unsexiest time of the year. Long may it last.