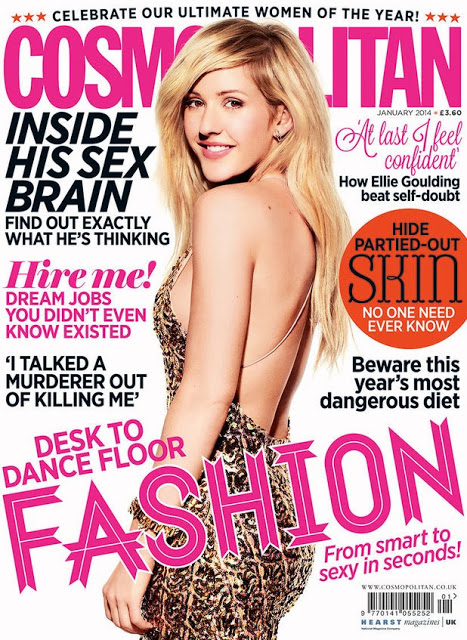 THIS IS THE BEST BIT: apparently ‘if sex is disappointing the first time around, it’s most likely just a sign that he likes you’. I’m struggling to see this one, tbh, and I’m also laughing my ass off, because, just in case you couldn’t tell the difference between fiction and reality and were labouring under the illusion that sex should be *exactly* like a porn film, Cosmo has some words of comfort. ‘All the men we grilled say all-out porn-style antics are a little intimidating’. Intimidating the hell out of all prospective sexual partners vs mental illness: it’s your monthly Sophie’s Choice, ladies.

Just when you were maybe thinking that, hey, perhaps it was all okay and you could relax and be yourself, there’s a helpful list from Andrew, 33, telling us exactly what we should and shouldn’t do in bed. Which is kissing he neck, duh.

Strangely, no-one on the problem page is asking whether it’s actually all right to kiss someone’s neck – questions include ‘Are one-night stands harmless?’, to which I would have thought the answer was ‘Probably, as long as you use a condom, are doing it because you want to and not for your self esteem, and don’t do it with David Cameron’. According to sex psychotherapist Rachel Morris, however, they’re no good for comfort eaters (so most of us, then), because ‘you’re especially vulnerable to picking up new and dangerous impulses’. So don’t have meaningless sex because it will make you feel bad about yourself and don’t comfort eat chocolate because it will make you feel bad about yourself … and presumably don’t comfort eat *while* having meaningless sex cos it will make you feel like the worst person in the world. ESPECIALLY if you’re reading Cosmo at the same time, you big vanilla sex-having moose.
Last but by no means least, we come to ‘Are you on the same sex page?’, a handy test (no, really) to see if you and your boyfriend are sexually compatible. Because RATHER THAN JUST ASKING EACH OTHER WHAT YOU WANT, which would be too simple, you can each go through Cosmo’s list of ‘controversial’ sexual activities (for ‘controversial’ read things like ‘having sex more than once a day’ or ‘giving oral sex’) and tick the ones you’re interested in. Obviously this is far more straightforward and far less cringeworthy than just having a conversation. 31 and 32 on the list are left blank, which gave me the urge to scrawl ‘Have an orgy with 63 other people’ and ‘Use a carrot’ in the space, and then put the magazine back in the shop.
And to help with contorting yourself into a position suitable for giving oral sex – if you’ve actually managed to agree on doing it – there’s a feature called ‘Nuke those glutes!’ a few pages later. I don’t really understand the title, but I think it’s to do with exercise because there are pictures of a woman with about 50 limbs wearing trainers while she twists herself into various physically impossible positions. I’m sure if I tried it I’d nuke some part of my body permanently, though it might not be my glutes.
At the bottom of this page Cosmo informs me that there might be E. coli in my handbag (cos I’m, like, so gross) and that I shouldn’t eat stray sweets I find in the bottom of it. The prospect of E. coli now looking rather inviting compared with reading any more Cosmo, so this was exactly what I did. Until next time, ladybros.

15 thoughts on “‘Inside His Sex Brain’: This Month’s Cosmo’s Voyage of Discovery”