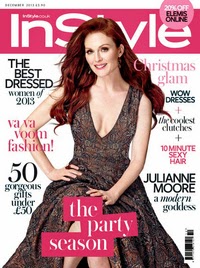 2 thoughts on “InStyle: The Magazine That Saps All the Joy Out of Fashion”