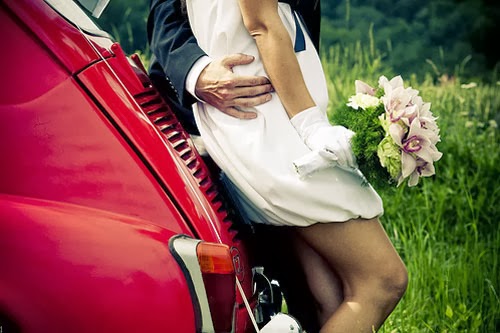 I have been married for 30 days. I have been asked the same three questions approximately 27,000 times. I’ll be honest: it’s starting to get on my tits. In fact, I would rather walk barefoot in a sea of Lego than answer these questions again.
This probably has more to do with me than the questions themselves because, as questions go, they’re fairly innocuous. They are the marital equivalent of talking about the weather. Yet, once teamed with my complete lack of patience and low tolerance for stupid, every single one of them sets my teeth on edge. So I’m answering them here, once and for all, and I’m redirecting every future questioner to this link. That cool with you guys? OK, awesome. Here’s my three-point guide to pissing off a newly married feminist:
1. What’s it like being married?
This is my least favourite, probably because it’s the question I have been asked most frequently. Believe me when I say I have absolutely no intention of shitting on your happily ever after, married life dreams, but being married is exactly the same as not being married. If you expect to feel anything other than hungover the day after your wedding you are setting yourself up for a huge disappointment. Obviously, the level of disappointment felt by everyone you lay this truth bomb on will be far worse. As will the shame you feel, as you lie awake at night, pondering your wife credentials and bringing yourself to tears by the fact that you don’t own a Cath Kidson apron and no one in your family was thoughtful enough to pass down a special secret recipe for the bestest evz double chocolate chip cookies to feed the kids at Christmas time.
Just kidding. Being a wife is no more difficult that being a girlfriend – and if being a girlfriend is difficult, then you probably ought to think twice about becoming a wife. I’m serious, kids, you will literally have to pay money to leave that douche-nozzle. You better make sure he’s worth at least a grand before you get yourself down that aisle.
2. When are you going to start having babies?
I was asked this at the table during my reception. Three times. There were only 19 people at my wedding. I was one of them.
On a related note, do you know what’s a really awesome question to ponder about with your family and friends while you’re eating? One that hinges on the consequences of unprotected sex. Side of my naked body while you’re chewing on that cutlet, Dad? Perhaps we can get on to whether the female orgasm really does facilitate fertility when Grandma finishes her dessert.
For some reason that I am completely unable to fathom, the sort of people who ask this question are looking for a definitive answer. They don’t want to know that you don’t know. They are not going to be happy with vague answers. ‘In a few years’ is just not good enough. They want times. They want dates. They want places. You cannot fob these people off with a shrug. These people need answers. And babies. ALL THE BABIES!
3. Is this a feminist thing?
This one is more of a sub-question, and invariably, the answer is always yes. I realise that for most women, this probably isn’t a question they hear too often, especially not during their first month of marriage, but I have been bombarded with it in the last few weeks.
To so many of the people I know, ‘feminist’ equals selfish. ‘Feminist’ equals me not caring about how my decisions might affect those around me (especially my husband.) ‘Feminist’ equals bitch. In this way, you can probably see why this one is pissing me off.
Unlike the other questions, this is one isn’t wedding-centred small talk – this is bait. This is an opportunity to witness just how selfish I am.
‘Not wanting to take your husband’s name? That’s very selfish of you. How do you think he feels?’
Naturally, I am not allowed an opinion on my own name. I just need to grow up and like, accept the patriarchy.
‘You don’t want your father to give you away? How do think that makes him feel?’
Of course, there’s no point in opening up the whole ‘women as personal property being shuttled between male members of their immediate family’ black hole of fun in this scenario. The aim is just to let me mumble on about gender equality for a little bit before rolling one’s eyes and hitting the sausage rolls again. See: grow up and accept the patriarchy, above.
My husband, on the other hand, hasn’t been asked any of these questions. Not even once. Granted, he doesn’t have the necessary parts for baby-carrying and I don’t actually know how often men get asked about their feminist leanings, but come on! You would have thought at least one person might have asked him about the realities of marital bliss. Perhaps a close male friend? But no, I alone have had to face the barrage of nonsense wedding-speak and even more ridiculous relationship-talk. This is surely one of the worst ever languages to have to become fluent in, secondary only to Klingon.
And just for the record, I did take my husband’s name. I just kept mine, too. Because you know what’s better than one surname? That’s right – three surnames! Boom.
-KR

18 thoughts on “Yes, I Just Got Married. Here’s How You’re Pissing Me Off”