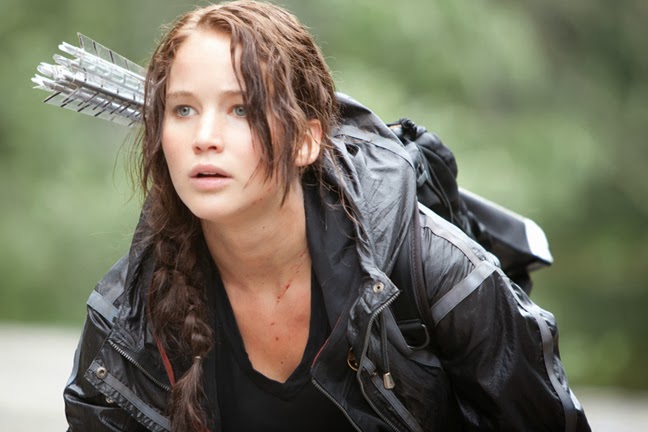 WARNING: If you have not read, watched or engaged with the cultural phenomenon that is The Hunger Games this may spoil one or two bits for you.

Like many people who are really too old to enjoy teen fiction, I love The Hunger Games trilogy. I love the post-apocalyptic setting, I love the new made-up words for things and, most importantly, I love Katniss Everdeen. She is a young woman who is brave, strong, smart and would risk everything to protect those she loved i.e. the heroine who a whole generation of girls brought up on classic Disney princesses has been waiting for. A new found enthusiasm erupted around the films when the truly awesome Jennifer Lawrence took the lead role and began speaking out about the sexualisation of young women and the pressure to lose weight for roles. The stories are being held up as feminist literature and it wasn’t until after my cinema trip to see the second instalment, The Hunger Games: Catching Fire, that I began to question it.

It was when my friend and I (foolishly thinking that this would be the perfect film to see on a quiet Sunday evening to prepare us for the week ahead) were exiting the screen jabbering at a million miles a minute about how it looked amazing and Katniss had grown as a character and how tense we had been throughout that I began to think about the other women in Katniss’s life and what this did to the film. I actually spent most of the night thinking about this (note: do not watch on Sunday night. It’s not relaxing and you will have weird dreams about mutant animals chasing you) and it began to sadden me about the thing I loved so much.

We all know Katniss is strong (Laurie Penny has already written a great piece on the problems of female characters being ‘strong’) and can outsmart even the all-powerful Capitol thereby breaking away from the stereotypes of a female lead, but if you take a quick glance round at the supporting roles, they cannot help but fall back into the maiden, whore, spinster female stereotypes that plague female characters. It’s almost as if it has taken so much effort to create one rounded female character that there was no energy left to put into the others.

Hollywood has long since had an issue with displaying female friendship and relationships on screen without resorting to backstabbing and bitch fights. There are a few classic exceptions such as Thelma and Louise (but yes they die) and Steel Magnolias (more death), but these are not the norm. However, newer films such as Bridesmaids and Disney’s latest (unbelievably), Frozen, being incredibly popular and showing women being supportive of each other and experiencing a range of emotions (as if they are actually human!) means that things might be set to change.

But to return to the Hunger Games; first we have Katniss’s family; her Mother doesn’t actually have a name she is only ‘Katniss’s Mother’ or ‘Mrs Everdeen’ therefore immediately removing her from any Bechdel testing. Katniss’s sister, Prim, is small and blonde and the epitome of innocence throughout and doesn’t actually do anything other than serve as a plot device for Katniss to get involved with the Games at the beginning. Maid and Mother (who daughter doesn’t get on with) – check.

In and around the Games there are great characters like Effie Trinket, the District 12 escort, but she is really just there to embody the shallow nature of the Capitol. Bimbo – check. In the first book/film we see little Rue, a fellow tribute, who is smart and nimble but ultimately is a replacement Prim and is all innocent and little to the end. Maid #2 – check.

I was excited to see the character of Johanna in the second film as she is supposed to be a previous winner and so clever and skilled, but also equally troubled by the death she has seen in the Games. This was shat upon quite quickly when her first conversation with Katniss involves her stripping to nothing in a lift. Whore – check.

One interesting distinction between the films and the books is the omission of Madge who is Katniss’s friend in District 12 and the Mayor’s daughter. She is depicted as being intelligent and a rounded character despite not being in books very much. I am not sure why they would choose to leave her out of the films, but it leaves Katniss without any female friends and presents her in the films as being unable to relate to other women and being more masculine. Women hating other women – check.

There are other female characters in the books, but on the whole none are given the same time and care as the male characters. I will go and see the last two films when they come out with the same relish as the first, but I am hoping that the success and popularity of the films will cause a ripple effect: Hollywood has got the hang of creating a great female lead and role model so why not let it drift into the friends, the sidekicks, the family members so that it doesn’t just have to be one lady propping up the rest. I’ll wait for that day, but until then, Katniss is still my girl.

11 thoughts on “Katniss Everdeen: Where Your Girls At?”