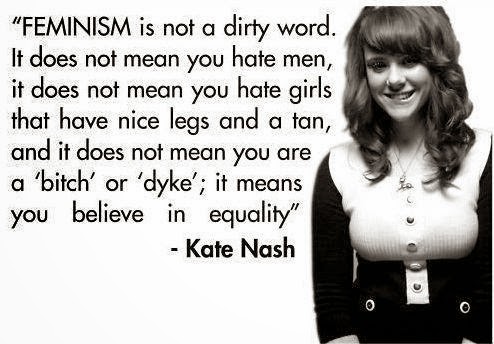 It doesn’t take long these days for me to slide the fact that I’m a feminist into a conversation. I feel as though I have to let people know this upfront, because a.) I don’t shave my head but I do shave under my arms and b) my bras might have holes in them but I’ll be dammed if I burn them before I get a good 6 year use out of them.  As I fail to exhibit any of the obvious ‘clues’ (so-called by the male dominated mainstream media), I think it’s fair to let them know so that, if in conversation, they’re ill-informed enough to ask if the victim was drunk, they’re forewarned of the tirade that shall be a’coming their way.
I have a friend who I have known for donkeys years. We both thought more was more when it came to applying glitter for the year 6 disco, we were both quite late for the whole boyfriend thing, and we’re both prone to forget the dangerous effects of Jaegerbombs on a bi-weekly basis. A few years ago, we both trundled up north to University, her to study Law and me to study English. She then spent some time traveling in Oz whilst I hopped from job to job at home. Recently we found ourselves back in our home town for a while and spending every weekend at the local. And here is where I discovered that she isn’t a feminist.
But she is.
She is in the terms that I define my own feminism. She believes in equality.
But that’s all I know about what her views on the subject. When pushed, it transpires that she sees feminism as a dirty word, something that still means you hate men.
‘But wouldn’t  you be pissed off if you joined a law firm and started to work your way up, but at the same time there was a guy, same age, same qualifications, same time working up the ladder but he got paid more than you?’
‘Yes, but that doesn’t happen anymore.’
‘Yes it does.’
‘Fine, that’s not fair but I’m still not a feminist.’
I’ve lent her my copy of ‘How to be a Woman’ as sort of a gentle introduction, but I’m pretty sure it’s collecting dust in her bedroom.
Should it bother me that she won’t call herself a feminist? Surely it is just a word, and actions should speak louder than any label?
But it bothers me. She is clever, bright, academic, witty and wins many a debate in the last 5 minutes before kicking out time in the pub. Why wouldn’t she want to describe herself as something that embodies her beliefs?
My mother also doesn’t call herself a feminist. 7 years ago she reluctantly took over a Girl Guides group in our town. Within weeks they had done away with the singing around a toadstool and now they go swimming and bike riding and also do an Eco Beach clean once a summer. They host talks from women who are in careers that are typically thought of as men’s professions. A surgeon, an engineer and a politician from the Welsh Assembly all came to talk for an evening about their careers to a group of girls between 11 and 14 years of age. That, I think, is a great Monday night and an active fight against the slow and subtle sexism that these girls might experience in school. But my mum says she’s not a feminist.
Should it matter then that these two women actively disregard the word ‘feminist’. Is it just a label? The belief in the fight for equal treatment is surely what truly matters? So does it matter if they actively avoid the word?
Is the fight less valuable if it is fought on individual terms? The same values still exist, headway is potentially still being made, we are united in our goals, just not our proclamation of the word. Looking at the outcomes of the #fbrape campaign, it is again proof that it takes people coming together, standing up together and saying together that something isn’t right for it to have an effect. We’re stronger fighting for our sex, not just ourselves.
Should I be berating for her to realise that the word has changed? That it can mean what you want it to mean. Feminist is how I describe myself, but every feminist argument does not define my own thinking. Occasionally I admit I find the word headlining a fight I don’t believe in. I think body hair is your choice and that’s all we need to say about it. Louise Mench needs to realise she may want to be a role model, but she’s not a model that most of us were built on. Feminism to me is a dynamic word. It holds people together through movements that can lead to change, and argues against FGM and 14 year olds subjected to abuse on crowded buses.  With violence against women still going on, it angers me that someone could be embarrassed by a word that is used by those campaigning against these atrocities. But does it matter? As long as they are against what is happening in the world, should we care what they call themselves?
With more and more women in the public eye cautiously hopping around the word feminism, and young girls verbally abused in schools for daring to proudly label themselves as feminists, should we be surprised the word attracts a mixed reaction even from those who believe in the principles of feminism?
I realise that I haven’t answered any of my own questions. Perhaps you can.
- BG