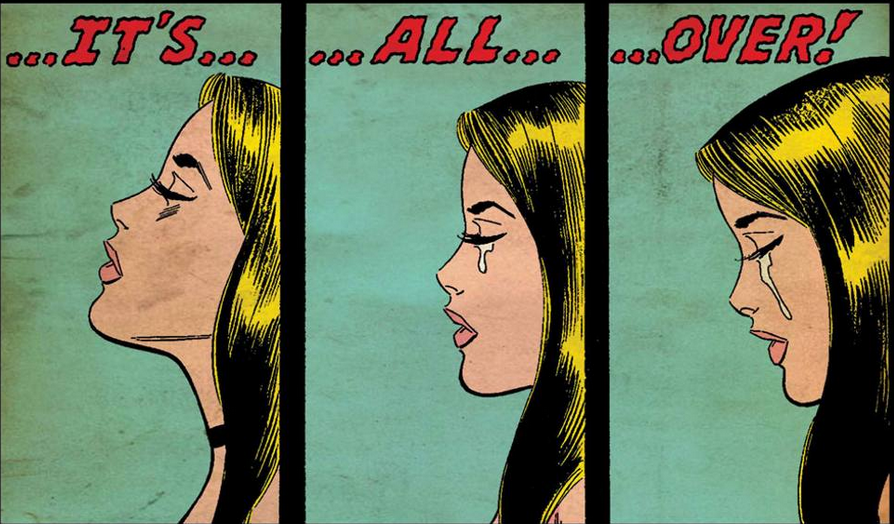 (…we need to get this girl to feminist rehab, pronto – Ed.)

Over the summer, I fell in love with a South African man. He was funny, he was sweet, handsome – and, most importantly, he let me be me. If I put on weight, he didn’t care, he just said there was more of me to love. If I ranted and raved about the over sexualisation of women, the oppression of woman, slut shaming, body image or the stereotyping of women drivers – you name it – he supported my opinions. He was, all in all, a perfect addition to my life. He didn’t moan when I scoffed four desserts in a day (which is most days), he thought I was just as sexy in ugly holey tracksuit bottoms and a hoody as he did in lingerie and he NEVER told me what to do. Then he had to go home, his visa had expired and I swore I would be out to see him over Christmas, and stay for three months.

And that is exactly what I did. I took a gap year (yes, I know what you’re thinking, I took a gap year and put my life on hold for a boy, but hey, it was relatively cheap travel and an excuse for an extended holiday) I arrived in Africa on the first of December, excited, and ready to see my boyfriend. Instead, I was met with his mother and his sister. Oh. While I suffered the four hour journey from Capetown airport to their home minus my boyfriend, I encountered my first of their many anti-women comments. From women. There was a sex worker on the side of the road, a common sight for me as I live in a city, but not so for them. Their response? “She needs to be stoned.” Erm, EXCUSE ME?! I do not fucking think so. We are not living in an age where stoning people is an acceptable punishment for a girl trying to make a living.

But this was not the worst of it. What came out of his sister’s mouth nexting is “she deserves to be raped.” They were an extremely religious family, so how in the name of all that is Holy can a ‘Christian’ woman condemn another woman to be raped? It’s genuinely the vilest thing I have ever heard. And what of the men that paid said ‘prostitutes’?, I asked. Oh but no, they were, OF COURSE, A-OK. Men ought to sow their seeds, they explained. Woman, meanwhile, should remain pure until marriage. Considering I had spent the summer shagging her son with no ring in sight, I was cringing. As I sat silently in the back seat , I wondered how exactly I was going to get through this trip. As it happens I didn’t.

Upon arrival at their house (we had to go through electrified security gates, with ARMED guards, I kid you not), I greeted my boyfriend, and felt a lot calmer. Until, that is, they explained their diet. The diet I was EXPECTED to follow. It eliminated carbs, processed sugar and soy. And any meat of which the animal may have been fed soy, which left only turkey and fish on the menu. With pumpkin. And peas. Every single night.

I was expected to pray before dinner, which seemed a tad pushy to me, as I wasn’t religious, and they knew that. I did it however, out of respect. The next morning, after spending our nights in separate bedrooms- go figure- my boyfriend and I went out for breakfast, as all that was available in their house was rye bread and millipap (literally a tasteless mush that looks like mashed potato, but is a lot harder) All I had eaten in the last 48 hours was the crap they serve on the plane, and a minimal amount of turkey and pumpkin (I hate peas.) I ordered waffles for breakfast, with bacon, syrup and sausages. My boyfriend raised his eyebrows at me. I proceeded to stuff the whole thing in my face and order a huge cookie to go. Another raised eyebrow.

Later, as I sat on his sofa devouring the cookie, his mother came to talk to me. Picture a 7 stone, 5’8 woman, and that is her. She told me that women who eat sugar have an increased risk of cancer as it combines with the hormones and increases the growth of cancer cells. What the fuck. I continued eating my cookie, trying to ignore the horrible fact that she is suggesting women who have suffered from cancer brought it on themselves because, cake. She then proceeded to tell me that if I put on weight men wouldn’t find me attractive (I’m a size 6-8).

Well blow me down. I never thought it was my job to keep a man interested in me. Being an unhealthy weight and starving myself to make myself appealing to her son? I think not. This was coming from a woman who subsists on a diet of juice, whiskey and turkey.

I could go on to list every woman-oppressing, racist, homophobic comment they made over the time I was there, but I will jump straight to my favourite ones.

They got me a book for Christmas about a prostitute who is redeemed because she lets in ‘God’s love’. They told me I was corrupted for reading Fifty Shades of Grey. My boyfriend poked my stomach and told me I was putting on weight. I wasn’t permitted to swear or blaspheme, or talk about drinking culture or partying. I was told, by a woman that has a maid, has massages twice a week, and her hair and nails done weekly, that housewives have it easy. I was told not to wear crop tops. I wasn’t allowed to mention my top exam results because woman were not meant to be intelligent. I was introduced to everyone with the end line “Isn’t she pretty?.” Like a trophy.

I cannot describe how oppressing the environment was. As a woman, I was not allowed to give an opinion.

I left my boyfriend, and was abandoned in a foreign country. I had to make the four hour journey to Capetown airport by myself, in a country known for its violence again women.

I don’t know what happened to my boyfriend, or why he suddenly changed. Maybe he was just as controlled as I was in that house.

I don’t regret going, I know more than anything now that I am not a trophy, that I am not a weak and feeble damsel in distress. I am a woman, and I am stronger and better than any man that thinks a woman should cut out sugar to be his perfect trophy girlfriend. I lasted exactly one month, which I think I deserve a fucking medal for, frankly. I knew people like this existed, but until I met them, I never quite realised the level of hatred and disdain that exists for women in this world.

When I fled the house, I left my empty pill packets in plain view.

10 thoughts on “My Month Of Feminist Hell”