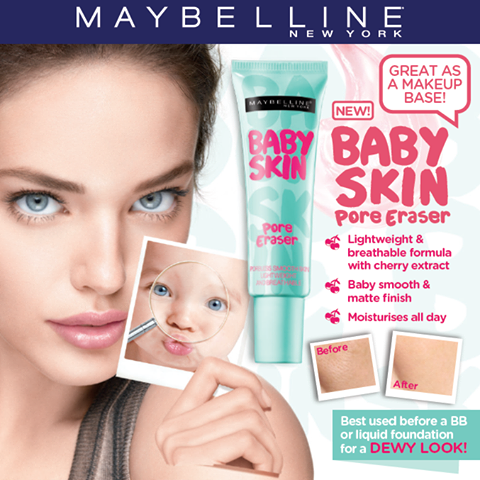 Cat food (I have a small but murderously feline-loathing dog)Internet geek dating (I already a geeky boyf, I just hate checking that ‘in a relationship’ box on Facebook. It’s my business, not the world wide web’s)Expensively rustic looking furniture (that I absolutely can’t afford)Racy negligee shoot in a photo studio (No)Online burka store (Again, no)

So far, so badly (but sometimes comically) targeted.

This week, however, I’ve been subject to a particular treat. One that made me first double take to make sure I’d read it correctly (I had), then Google it to make sure it wasn’t a spoof (it wasn’t).

Not content with the not-entirely-new trend of infantalising women (think Marilyn breathily husking her way through ‘My Heart Belongs to Daddy’ – eeerrrrgghhh!), cosmetics wunderkind Maybelline have have come up with a whole new riff on the subject – a cream that ACTUALLY MAKES YOU LOOK LIKE A BABY.

Thought it was ok for your skin to breathe? Through its pores? Yeah, no. It’s not OK, you ugly pore-sporting grown-up womanbeast.

Forget it you ugly pore-sporting grown-up beast. For Maybelline’s new ‘Baby Skin Pore Eraser’ comes complete with a pouting Emily Didonato holding up a photo of the squishy infant she’s keen to emulate.

Now, there are some of you who might say, ‘but Emily Didonato is a woman of brain boggling beauty with the body of a goddess and the face of an angel, it’s the very fact of her obscenely incredible looks that her entire career is based on.’

But no. Even Emily wishes to swap her face for the squashy plump cheeks of a newborn.

Oh, and just in case you were in any doubt that Maybelline are definitely saying ‘women, you’d absolutely look better if you looked like a baby,’ the’ve handily come up with an unthreateningly babyish font for the turquoise tube that implies you’re supposed to throw in a few boo-boo-ba-bas and a giggly squeal of angelic delight as you smear it onto your disgusting adult skin.

Now, it’s hard to be completely immune to the coveting of lovely, smooth, soft skin.

I grew up in a hot country and covered in freckles, with little creases of sun damage on my temples and some fairly deeps trenches when I furrow my brow, I do, I admit, look quite enviously at one of my friends’ peaches and cream Irish complexion, which is regularly shaded from anything resembling a sun beam with factor 50 and large hats.

But I don’t feel any less feminine or attractive because of my speckledy-brown-egg face, even though, according to Maybelline, I probably should. I just kind of want to stroke her super-smooth cheeks while gently cooing at the silkiness of it.

But no, according to Maybelline (which from now one I shall refer to as ‘the Charles Saatchi of the cosmetics world’ considering how, it too, apparently ‘likes its women pale’), I am wrong to think I might actually look OK the way I am.

I should actually loathe my vile, splotchy, wrinkled crone-skin, suppressing the sun-marks and lines that tell the story of my childhood by instead attempting to smooth it back to womb-fresh babyness with latest their fuck-me-that’s-completely-ridiculous product.

You see, what Maybelline are saying is that to be more womanly, more feminine, more attractive, more Emily Didnonato-like, we need to look more like babies.

And that’s many things. It’s laughable for one. It’s downright ridiculous, for another. It’s odd, it’s insulting, and it’s also worrying.

Infantalising women is a real thing. It’s a viable ‘get out of jail card’ for many young women lacking in the confidence to throw themselves into challenges and gain skills and experience through failure as well as success.

It’s the wide-eyed, giggly ‘oh no, I’ll just stand on the sidelines and twiddle my hair, I prefer to count my fluffy pink pens and nail varnishes anyway.’

And the ‘well, I was never going to be very good at it because I’m just a silly-willy, giggle-headed, dumb-dumb girlie girl.’

And it sucks. Because women are genuinely told that this is the way they should be.

It’s a nod to words like damsel, princess, and daddy’s little girl. It conjures up images of ‘manly men’ looking after their ‘child-women’, and of women as helpless, silly little fools who’s heads are full of thoughts of kittens and fluff and occasionally amusing aspirations of ambitions far above their limited, childlike capacity.

In a twist of irony, actual small children and their aspirations seems to be facing in the opposite direction – with iTunes coming under fire last week for their marketing of a game that allow girls aged 9+ to carry out virtual plastic surgery on a poor, fat girl who no diet can help.

Hang on, so small girls should be coveting an adult appearance while adult women should covet children’s looks? And men prefer women who resemble infants? Actual real-life infants? Like…isn’t that a bit like saying all men are secretly a bit paedophile-y?

I am so confused guys!