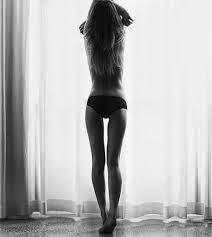 Thigh gap bible Cosmo has confounded readers this week by declaring itself anti-thigh gap. Whether or not the magazine will be embracing plumptious thighs that rub together insofar as featuring them in photographs in their magazine remains to be see, but we reckon the answer is : ER, NO.
In a piece entitled ‘Why the thigh gap needs to stop immediately’, writer Kendra Alvey manages to make some relatively well thought out arguments about body fascism while simultaneously shaming anyone whose skeletal structure means that their thighs don’t touch at the top, and of course pointing out to all Cosmo readers that she used to be a super-hawt Hooters girl and is therefore qualified to speak on this topic. According to super buff but not thigh-gapped Kendra, having a gap between your thighs ‘makes you look like a little boy in a Wes Anderson movie.’ Take that, wide-hipped, bandy-legged women of the world. I hope you feel fucking great about yourselves now.
And thus, Cosmo’s #StopThighGap campaign falls at the first hurdle.
As numerous people who aren’t verging on brain dead have pointed out, it’s possible to criticise certain patriarchal structures without being a dick to the women involved in those structures. It’s called being a good feminist, and also not being a bitch to people. Hence you can think Playboy sucks a massive dong without insulting the women who get their paycheques from that very same company. However, such cognitive dissonance seems beyond churnalist Kendra, who seems to think that positioning herself as glorious saviour of a billion anorexics simply involves explaining how social media is likely to blame as it makes you well jells of all the skinny women you, sans internet, would never see, as well as how the thigh gap obsession is pointless because ‘most of us aren’t built that way.’ ‘Gee, thanks Kendra’, the western world’s eating disorder sufferers are all undoubtedly mouthing at their monitors, ‘all I needed was some of your straight-talking snark to snap you out of my SERIOUS MENTAL ILLNESS. Now back to my Moonrise Kingdom torrent.’ Seriously, F-off.
Some might say that Cosmo’s #StopThighGap campaign is a step in the right direction. To which I say: bullshit. It not only betrays a serious misunderstanding of how pro-ana works by assuming that eating disorder sufferers will simply snap out of it if they see how silly they’re being/how gross they apparently look, but it also manages to insult a whole load of women who might just have both wide hips and healthy lifestyles. It’s quite an achievement, and, from the looks of the Facebook comments, Cosmo readers call bullshit.
It’s a shame that, as per usual, a serious point about access to pro-ana content being limited ends up obscured by body shaming lingo. If Cosmo wants to address the thigh gap and the issue of eating disorders, it needs to stop using shaming language such as ‘nuts’, it needs to stop positioning itself as a voice of reason in an image-obsessed world when it itself is a major part of this world, and it needs to have an honest conversation with its readers about how its pages and pages of bikini detox and cosmetic surgery advertorial have contributed to this clusterfuck of a situation. It needs to ditch the patronising ‘fairy godmother’ tone and stop asking questions such as Kendra’s inane: ‘Do you really think women like Tina Fey or Beyoncé care one single bit about a thigh gap? I bet they don’t. I bet they’re too busy being cool, talented and incredible.’ And it needs to stop fucking implying that people who suffer from eating disorders and body dysmorphia are ‘lame’ or stupid. (‘Ignore the lame and revere the intelligent’, says Kendra.)
Enough, already, Cosmo. You’re no longer the voice of a genaration, you’re no longer arbiter of what’s cool and what isn’t, you’re just another female-focused content peddler screaming into the abyss of the internet, and nothing exemplifies that more than the fact that you’ve managed to launch an attack on a worthy target – namely female-focused body facism – but for ALL the wrong reasons.

8 thoughts on “Why Cosmo’s Wrong About The Thigh Gap”