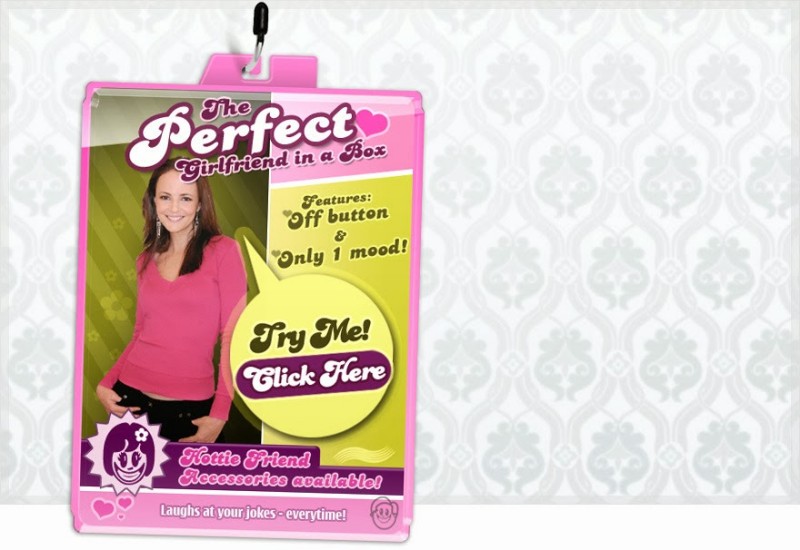 …because I’m fucking not.

Ironic, how just as I’m doubting my own abilities as a girlfriend, this little puppy of a press release lands in my inbox, courtesy of a bemused journalist:

Nice, huh? So basically last night I had a huge row with my boyfriend. So huge that I actually thought we might break up (the row was about a pie – I am not joking). I did not, however, mourn ‘appropriately’ – the night ended with me and my friend Kate finger pointing to Jane Weidlin’s Rush Hour while sloshing warm prosecco all over the kitchen floor, so I suspect I might need some girlfriend lessons. Or lessons on how not to suppress my
emotions using alcohol. Hell, probably both.

Thankfully, here she is, my muse, ‘London’s Perfect Girlfriend’. I have, it seems, much to learn from her. And I quote:

‘London’s ‘perfect girlfriend’ is 5ft 6 inches tall, drinks white wine, has no tattoos and supports local team Tottenham, it has been revealed.’

I am 5ft6 inches if I stoop and flatten my hair a bit, AND I drink fuckloads of white wine: SCORE. I don’t support Tottenham, so already my perfection is coming into question, but I’m doing well so far.

‘A study of 2,000 men by location based dating app [REDACTED SO AS NOT TO PROMOTE THESE BASTARDS] also found that men in London like a woman with a foreign accent, who drive an Audi
TT, is a meat-eater and loves a roast dinner.’

I don’t technically have a foreign accent, but I grew up in Wales and can do a pretty convincing North Walian accent if forced. I’m not sure how sexy it is and it kind of reminds me of the guy I lost my virginity to but hey, it’s something. I also LOVE a roast dinner, and having been a forced veggie for twelve years of my life, will now eat pretty much any part of an animal. Last time I went to France I had pig’s colon!! Could it be that I might actually be London’s perfect girlfriend?

Ok, so I don’t drive. Even if I did I’d never drive an Audi, because I am not a letting agent called Andy.

‘Like other British men they would like to date a teacher or nurse with brown hair and think it’s more attractive if she wears makeup – but only subtly.’

But be warned, nurses and lady teachers of London, your years of training and underpaid labour and long hours are only worth so much as far as your perfectionability goes. If you go about no make-up (or too much), the men of London won’t be impressed. We’re talking the ‘natural look’ here, as favoured by women’s magazines: a look which apparently makes it appear as though you’re not wearing any make-up despite the fact that you’ve been goaded into buying fifteen different products to achieve the finished result. And you thought your public sector job was hard, bitches.

‘Weighing a healthy 9st, she’s a 34C who enjoys listening to a bit of pop music and her favourite movie is the Patrick Swayze classic – Dirty Dancing.’

Let’s break this shitlist down.

9st? Not since I was 21, you bunch of cunts. Now I feel really bad about myself.

34C? At most I am a B, but to be honest, only when I’m on the blob. Most of the time I’m more like an A. So I’m fat and I have small tits, basically. I’m Lena Dunham! (“No, her stomach isn’t huge, it’s just that her boobs are really small – it’s an optical illusion”)

And Pop music is OK, I suppose. The last song I listened to was ‘Bloody Motherfucking Asshole’ by Martha Wainwright. That counts, right?

Oh, and I’ve never seen Dirty Dancing. Do I need to hand my vagina back in now? Or should I just give it to the men of London, on a plate? It would solve a lot of problems, it seems.

‘When asked to choose a celebrity who resembles their perfect girlfriend, Kelly Brook was London and the nation’s most popular choice, followed by Denise Van Outen then Kiera Knightley and Katy Perry.’

Talk about a mixed bag! I do not resemble any of these women, but I could potensh pass for Katy Perry in the right light, if I stopped eating for a couple of months and dyed my hair black and stopped calling myself a feminist. Potensh.

Friends? Was this survey conducted ten years ago? It’s not even on anymore.

The press release, which is probably being uploaded to MailOnline this very second, continues:

‘We know that everyone has a favourite hair colour and sometimes even eye colour and height.

But we think that avoiding a woman because she might support an opposing football team or enjoy a different genre of films to you, might be being a bit too picky.’

‘It was also found that the perfect partner enjoys a wide range of hobbies, with reading, going out to dinner and travelling as their favourites.’

Those are literally EVERYONE’S favourite hobbies, as evidenced by their dating profiles.

‘They also love to go to bars with their friends, watching a live band every so often and are careful with what they eat – without being too strict.’

So much for that regular roast dinner they wanted me to snaffle. ABORT ABORT.

‘Men like a girl who likes to watch football and would prefer them to wear either skinny jeans or miniskirts.’

The rage is becoming strong now.

‘Researchers also found that the perfect girlfriend needs to be adventurous in the bedroom, is happy to embark in a bit of role-play and experiment with different positions.’

Role-play, huh? Like being a sexy nurse, or perhaps a teacher? Or Denise Van Outen? Or some kind of nurseteacher nineties ladette hybrid?

‘And men don’t want a woman who can just impress them; they want a girlfriend who will get on with the other important woman in their life too – their mum.’

Fuck your mum. She made you. Seriously, fuck her.

‘But after all that, three quarters of the single men who responded to the study said they don’t think they will meet their perfect woman and will have to compromise instead.’

At which point I begin playing the world’s tiniest violin.

‘And more surprising still, two in five men already in a relationship think their current wife or girlfriend isn’t the perfect woman for them.’

Thus comes the realisation that, not only am I too angry and flat-chested to be London’s perfect
girlfriend, but I’m probably not even my boyfriend’s perfect girlfriend. Thanks bullshit press release, your sexism just made my hangover ten times worse. I’m off to bake a literal humble pie while watching Dirty Dancing now, you pricks.

34 thoughts on “Could you be ‘London’s Perfect Girlfriend’?”