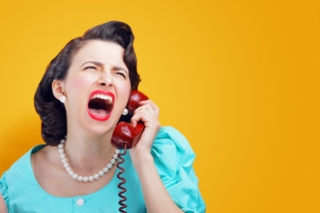 Recently, a male colleague at work glanced at the array of lunch items on my desk and asked pointedly, “What are you eating now?!” Turning away from my perfectly arranged artillery of tupperware boxes to face him, I brazenly demanded to know if he was an officer of the diet police and whether he was going to lock me away for my sins. As a rather feisty feminist, everybody else in the office probably thought that my colleague’s comment had slipped across my teflon-coated shoulders virtually unnoticed. But au contraire, my friends. Instead, I ate the remainder of my lunch feeling guilty and embarrassed about the amount of food I had consumed.

Now, before you get all Chuck Norris on my work colleague, I have to point out that he was absolutely joking. In fact, he’d probably be mortified if he knew that his comments had made me feel that way. We’ve both tried to lose weight in the past so his joke was a nod to the fact that we’ve both well and truly fallen off the diet wagon (I caught him with a mouthful of biscuits when he thought nobody was in the office). However, this idea of women being “too much” is most definitely not a joke, and is something that us ladies are having to deal with on the regular.

Exhibit B: After writing a rather angry opinion piece on my blog lately, I received a snore-inducing lament about how young ladies shouldn’t swear, especially in writing. It was as though the material and concrete presence of a curse-word, ensconced in text forever, bore into his very eyeballs and set off all manner of stereotypical gender alarms. “Warning! Warning! A female of the species has dropped an F-bomb! Alert the troops! Cover the fragile ears and eyes of the men!” Well sir, I don’t remember ever telling anybody that I was going to behave like your grandfather’s idea of a perfect young lady, and if my F-bombs are offensive to you, my suggestion is that you get the F-bomb off my website.

Women are constantly chastised for being too much of anything: too loud, too boisterous, too sweary, too fat, too thin, too cocky, too good at recognising patriarchy when it stares them right in the eyeballs. Men, on the other hand, are praised and celebrated for their extremes. Well, I call bullshit, and it makes me mad as hell.

Good grief, I’d better be careful about openly admitting I’m angry, though. You see, one time I got angry at the way somebody had spoken to me and instead of the apology I expected, I received an expression of relief that my “little strop” was over with. Oh, my. My, my. If I’d had a real “strop”, he’d bloody well know about it: think Incredible Hulk after ten bottles of Stella Artois having just come face-to-face with the man his girlfriend has been having a brazen affair with. Yes, I can throw down a tantrum as well as any toddler in a busy supermarket – or indeed, as well as any high-powered CEO who’s failed to achieve the turnover he wanted. And, god help them, if someone even dares to mention the words “period”, “time of the month” or “red flag day” in response to my legitimate anger, I will delve into the grizzly details of my menstruation cycle with them, no holds barred.

There is a glaring gender inequality here and it goes right back to the idea that women should be quiet, passive and not take up too much space. Well, I’ve got news for those folks. If there are biscuits in the house, I will scout them out like a little piglet searching for truffles; my waistline is nobody’s business except perhaps Topshop’s; if I’m angry, it’s probably because somebody pissed me off; and my language, including the obscenities, are governed by nobody except me. Mess with me and I am as liable to swear as the next motherfucking trooper.

So, fellow ladies, this is a call to arms. Let’s never feel ashamed of the fact that we’ve just eaten a huge meal and are looking forward to seeing the pudding menu. Let’s pepper our language with effs and jeffs if we feel the need. Let’s be loud, strong and powerful so that we can get our voices heard and get where we want to be in life: to that place where nothing we do is deemed “too much for a woman”.