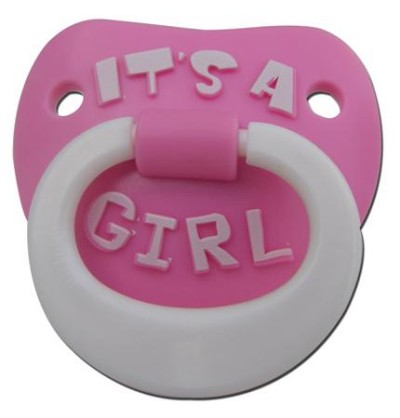 Babies are great. They’re like big people, but without all the annoying habits you accrue with age. A baby won’t snort derisively if you tell them your optimistic career plans. A baby doesn’t check its messages surreptitiously on its iPhone while pretending to care about your day. Babies are fresh slates. They haven’t had the time to suck up everyone else’s prejudices and expectations of them, and regurgitate them in passive aggressive ways. All they regurgitate is mushy peas and breastmilk.

Last week, a friend of mine had one of these baby things. So, being the upstanding citizen that I am, I did what any other upstanding citizen would do and rushed out to the nearest stationery shop to fulfil the cultural requirement of buying a card to commemorate the coming-into-existence of another person. I had two choices. From the shelf, symmetrical with their pastel pinks or baby blues, ‘It’s a girl!’ or ‘It’s a boy!’ boomed out at me. No other choices.

Now, let’s just ignore the obvious stupidity of the statement ‘It’s a girl!’, not dissimilar to the ‘Oh, you’ve had your hair cut’ and ‘Gosh, you’re tall’ platitudes that we all know and love so well. We can safely assume that any new parent is presumably aware of their baby’s sex – my friend definitely was; how else would I have known which colour card to choose?

What astonished me was just how binary the card selection was. In Paperchase, identical cards featured pink or blue versions of tiny feet, washing lines filled with nappies, babies in babygros and even, bizarrely, pink or blue giraffes. In Tesco, I was offered the choice of ‘All wrapped up in blue’ or ‘Pretty in pink’ (yep, that’s right, your newborn can’t even fully extend her arms and legs yet, but she is already pretty, by default, on account of her gender). M&S offered cards for welcoming your ‘little man’, and in Clintons, two matching cards offered the contrasting ‘Hello baby girl’ and ‘Hello little fella’.

We define ourselves by the categories we think matter. Gender, class, race, nationality and culture are all identity constructs that exist only because we have imbued them with importance. When we say – or even think – that we’re middle-class, or black, or Geordie to the backbone, we’re saying that these are labels that are in some way useful and mean something particular to us. When gender seems so often to be such a problematic label, it is a wonder we still continue to fixate on it.

The UK is doing a pretty good job at the moment of trying to fend for children’s rights to disregard gender stereotypes (the Mumsnet campaign Let toys be toys, and the new Waterstones-backed campaign for marketing books according to interest, not gender, are both prime examples of this), but there’s still a long way to go. Simply by asking, ‘Is it a boy or a girl?’ we often, sadly, begin a lifetime of unnecessary gendering.

Sex is a physiological construct, like height. Gender is a sociological one. Until we can allow people to take their gender less seriously, and stop thinking of it as their primary and defining characteristic, we will be forever plagued with naff greetings cards that only come in colours unfit for anything more prominent than a skirting board.

Oh, and the card I bought in the end? I went to Oxfam for a nice blank card with some brightly coloured flowers on it. I’m thinking of starting my own range of cards for new parents, with ‘Well done (but that was the easy bit)!’ written on, and a picture of a toddler writing in lipstick on the wall. D’ya think it’d catch on?