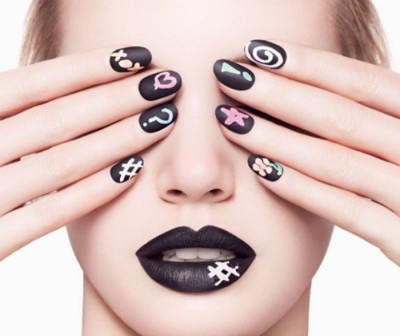 I adore having my nails done. Nothing makes me feel more smug than when I’m tapping away on my keyboard at work, my freshly-painted claws glistening and winking at me. When Boots have those 3-for-2 offers on I find myself scooping up Barry M pastels like pic’n'mix, only to discover I’ve already got several of them in my (embarrassingly extensive) collection at home. I also possess a long-held fixation with finding that elusive perfect red: bright, with a dash of orange, but not coral (Essie’s Fifth Avenue is the closest I’ve found, if you’re interested).

And clearly I’m not the only one who’s overly enamoured with her scratchers. The beauty industry’s remarkable weathering of the recession has been well documented – nail bars and salons are booming, and makeup sales are ever on the up. When you can’t afford that Chanel handbag, a visit to their beauty counter will do instead – or so the theory goes. Polished nails are an ‘affordable treat’; a touch of luxury for the same price as a Big Mac and fries.

But, when you stop to think about it, isn’t the fetishisation of our fingertips just a little bit odd? Long, painted talons are an essential item in the sexy lady toolkit – along with the big lips, pushed-up tits and cinched-in waist – yet they’re not a remotely sexual part of the body. Most other sexy-signifiers have some kind of grounding in human biology, as well as various evolutionary theories regarding their appeal – which, while probably being a load of pseudo-scientific bullshit, at least make a bit of sense. But nails? They’re not even living flesh. They’re just a cluster of dead cells. Who decided that decorating them was attractive?

Personally, what I really love about having polished, preemed fingertips is how they make me feel pampered and luxurious, as opposed to sexy. A manicure is a signifier of money and leisure. The woman with the long, exquisitely painted nails is the one with enough spare time and cash to sit around on her arse while her digits are attended to. She doesn’t take on heavy or physical work, as that could cause a chip or – even worse – a break. She probably doesn’t do anything unfeminine, such as play sport or go on adventures – she’d get too much dirt underneath her fingernails. And she certainly doesn’t do the washing up (the number one enemy of the new manicure) either. She most likely has a maid do that for her. The woman with the perfect nails is the woman with a shit-tonne of time and money on her hands – quite literally.

So often we believe that what we find attractive is somehow innate and biological. We think someone’s pretty because our brains somehow, naturally, ‘recognise’ pretty. But really, our ideals of female beauty are so interlinked with signifiers of wealth and status that it becomes near impossible to separate them. As well as nails, see tanning: in ye olde days, pale skin was the ultimate desirable. It showed you were from the upper classes rather than a lowly commoner who had to labour away in the fields. But, since the invention of air travel, our super-rich are more likely to be found lounging around in tax havens in the south of France rather than rotting away in castles, and thus the tan became the new signifier of wealth. Us peasants may not be able to own their yachts or diamond jewellery, but we can mimic them with a spray tan or a manicure instead.

Couple this with a hefty dose of ideas about that aforementioned ‘feminine’ behaviour – not partaking in physical or strenuous activity; generally just sitting around looking pretty – and it becomes easier to understand why these collections of dead cells, whose original function was simply to protect our fingertips, have become so central to ideas surrounding female beauty. Right now my nails are painted a deep cherry red, and all this pondering is making me look at them slightly differently. I’ve never particularly aspired to ultra-feminine ideals, or to make loads of money (just ask my bank manager), so I guess my love of everything nailcare-related shows just how strong the pull of society’s beauty ideals are. However, I’m not quite ready to chuck away those brightly coloured pots and go au natural just yet – I’ve heard there’s another 3-for-2 on at Boots right now, and I’d really love to try out those Model’s Own neons.

12 thoughts on “Why Getting Your Nails Done Is Downright Weird”