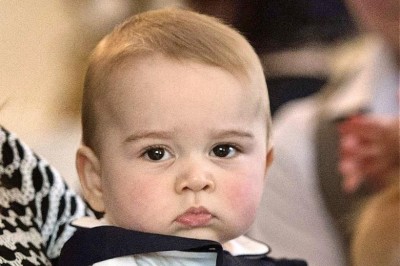 The other day I was on the train with my baby daughter.  The lady next to us was minding her own business looking at pictures of Prince George on his tour of New Zealand in the newspaper.  My daughter leaned over and smiled at this lady, which she found charming.  My daughter then made a grab for her newspaper.

“Aww…she is lovely!” said this lady, responding as all strangers do to my child.  Apparently an advantage of being a baby is that people think that making a grab for their possessions is adorable rather than rude and thieving.

“Oh! Same as Prince George!  They should get married!”

There it was.  Exactly what she was always going to say.  Exactly what has already been said over 100 times in the 9 short months of my daughter’s life.  Suddenly, by the accident of her age my wonderful, cheeky, thieving little so-and-so has been turned into a princess.  A total stranger has wiped out any of her own personality and deposited her into a box labelled ‘stereotyped dream for little girls’.

It is not just strangers either.  My mum is very taken with the idea of being great grandmother to a future monarch.  When my daughter recently got the hang of waving goodbye, it prompted an aunt into saying ‘oh she is practising her royal wave!’. Other family members found that there had already been a Princess in the 18th century with the same name as my daughter, so that made it all the more likely that the match could go ahead.  Of course! If I had named her Maureen or Scarlett or Madison then she wouldn’t be Princess material, but her fate is sealed by the incredibly popular name I chose in a post-birth blur.

But it’s harmless isn’t it?  What little girl wouldn’t want to be a princess?  Disney has built an entire industry on just this dream.   All the clothes!  All the expectation to be faultless!   All the media scrutiny!  All of that seeming like you are incredibly powerful, but actually you are just expected to be seen and not heard.  I mean, it worked out so well for Princess Diana.

My main objection to this idea of my daughter’s future is that I happen to think she would be really really bad at being a princess.   It is obvious that the most important attributes of princesses are that they have shiny hair and look good in clothes.  My daughter has no hair and has covered her clothes in dribble and breakfast within 10 minutes of them being put on in the morning.  I know she is only 9 months so there is not much evidence to go on so far, but unless princess duties require throwing everything in her hands onto the floor I don’t think there is much hope.  If we are going to indulge in the favoured parental pastime of ‘fantasy careers for my child’, here are a few which she has actually shown some talent for:

1)   Prime minister – she could shout down any member of the opposition in Prime Minister’s questions.  Particularly if to win the debate she just needed to say “Babababababah! Bababababah!” She also looks quite a lot like Winston Churchill.

2)   Bomb detection expert – she has an uncanny talent for finding the most dangerous thing in the room.  Then trying to eat it.

3)   Rock drummer – rattle, table, biscuit tin, recycling bin.  You name it, she will bash out a rhythm on it.

4)    Artist working in collage – she enjoys ripping up paper so she is half way there.

5)   Extreme hair stylist – She has an obsessive interest in hair.  Particularly in trying to pull it out from the roots.  A clear destination for ‘no pain no gain’ celebrities.

I know that parents having unrealistic dreams for their children is a well worn cliché, , but part of the joy of having a 9 month old is that she has an entirely unspoilt future stretching out in front of her.  And yet, the best that strangers and family alike can imagine her to be somebody nominally important’s wife.

It is not just my daughter who is subject to this.  All the 350 odd thousand girls born in 2013 in the UK have the expectation that marriage to George should be their ambition heaped upon them.  There are vests proclaiming it.  George has already been matched with babies from New Zealand to Bollywood. Thousands of little girls, who aren’t even one year old, already encouraged to hope for this damaging and, let’s face it, impossible dream.

And that’s before we even get to HRH. It is pretty insulting to him too.  He is only 9 months old as well.  Sadly the shiny, unwritten future in front of my daughter is impossible for him.  However, I am sure that his fledgling identity can’t be helped by his female peers being dressed in t-shirts with his name on them before he can even walk.  What if he is disinclined to marry?  What if he is gay?  I haven’t seen any ‘I’m going to marry Prince George’ babygrows with blue lettering on them.  He might be able to marry a Catholic these days, but George is as limited by this mass delusion as the little girls are. His future is already mapped out.

I have a strange relationship with George and his parents.  Obviously I don’t know them, but there is something about being pregnant at the same time as someone so relentlessly in the public eye that makes you feel enormous sympathy for them.  As every bump along the maternity road happened to me, I got to see it being played out for Kate across the sidebar of shame.  My daughter was born in Central London two weeks before George was.  You can walk between the maternity hospitals across three Royal Parks.  While the world’s media camped outside St Mary’s, I got to share a post-natal ward with women desperate for their first fag in 9 months.  While the world waited with bated breath for a gold-framed announcement to appear outside the Palace, we were taking pictures of our newborn with a crown shaped teacosy on her head.  My daughter has the luxury of a normal life, which George will never have.  My protective parental instincts want that to continue for as long as possible.  I wonder if Kate’s instincts want that for her child too.