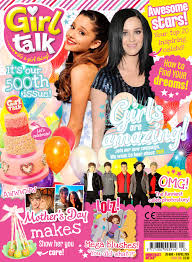 I, former Girl Talk reader, am a child of the nineties, which was arguably a simpler time to be a young girl. How funny it is to think of our parents wincing at the flagrant sexuality of The Spice Girls, channeled through our young lungs in a joyous shriek: ‘If you wanna be my lover, you gotta get with my friends’. It all looks practically chaste, now. If only they could have seen what the future would hold for the young women of pop, with their “My pussy tastes like Pepsi Cola” lyrics, manic dry-humping and sucking off of mallets.

The nineties were a time when Girl Talk magazine gave out little plastic dogs as free gifts, and sometimes they were glittery. This was, as Bea Appleby, editor of the magazine, puts it, Girl Talk’s ‘wholesome’ phase, where you could happily find sheet music for your recorder printed next to a photo-novel about you and your BFF wearing matching outfits to a party. It was all in good fun.

This, of course, all changed when the High School Musical meteor hit, with Bieber Fever and One Direction waiting prepubescently in the wings. It became apparent that plastic dogs were clearly not going to cut it anymore. A survey conducted by the magazine found that the readers’ most admired women were almost exclusively pop stars, and that 80% of readers chose personal attributes such as being pretty over alternatives such as being clever, or brave. Realising that the magazine was itself contributing to a culture of celebrity idolatry and image obsession, Appleby sprung into action. Last month she announced that Girl Talk would now be entering a new phase, one with feminist values at its core.

So, what does feminism look like for 7 to 12 year old girls? Where do you start with a magazine that uses pink and purple the way newspapers use black and white?

I suppose the answer is: slowly. Next month’s cover isn’t likely to feature ’10 top tips for bringing down the patriarchy’ or ‘Cringe moments with Germaine Greer’. What it will have, however, is a Girl Talk pledge, which begins, ‘I will love myself the way I am’, and goes on to champion hard work and being supportive of other girls, as well as a belief in equality. It’s somewhat incredible that this should be a revolutionary step for a magazine targeted at young girls, but look around any newsagent at the sea of fairy princesses and free lipsticks, and you come to realise that it really is. Combine this with their ‘Girls are Amazing’ campaign, and they could be said to be leading the way on a more enlightened magazine culture.

Girl Talk also plans to feature stories in each issue about women in professions not typically seen as feminine. Indeed, while Harry Styles and his band of merry men won’t be sent packing any time soon (and why should any tweenager be denied the vapid pleasure of boy band worship?), wouldn’t it be great to see this complemented by a celebration of women musicians? And by this, I mean celebrating them for their mastery of an instrument or for their excellent songwriting abilities, rather than just their ‘style secrets’ or ability to straddle inanimate objects. They key to all of this, I think, will be focusing on talking about what women do rather than what they look like.

Girl Talk’s new phase should be all about encouraging girls to broaden their perspectives and make decisions for themselves. Teaching these fundamental tenets of feminism – equality and choice – shouldn’t be too hard. Thinking about my time at a mixed primary school, girls and boys were each other’s equals in the playground as well as in the classroom. It is all about intercepting that creeping belittlement of self-worth and the ever-encroaching parameters of ‘beauty’ that cut young women down in their adolescence and far beyond.

It is not enough to go back to the ‘wholesome’ days of Girl Talk, or to simply stop promoting the young women of pop who have moved on in their work and are no longer appropriate for their pre-teen audiences. It is far better to acknowledge the world that young readers will inherit, misogynistic warts and all.

Ideally, the women’s magazines of tomorrow will be equally enlightened (see Rookie mag for how to do it right). It is indeed a sad thought that, after so much effort, readers will be handed over to the vultures at the body-shaming publications we see littering our shelves today. At the very least, by encouraging readers to question their idea of what it means to be a girl, a magazine like Girl Talk has the potential to provide young women with a nose for, and a resistance to, everyday sexism. With still so far to go in the fight for equality, resistance is a tool young women are going to need a lot more than a pink sparkly hairbrush.