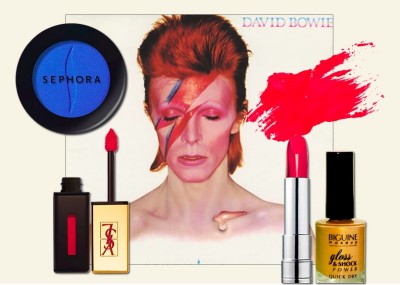 It started in my mother’s bathroom. I was sixteen, it was summer, and I was stood in front of the mirror with my sunburnt hooter staring me in the face. ‘Just try a bit,’ Mum had said, ‘It’ll make it look better.’ I did try a bit. And then a bit more. I went a bit far, because when I came downstairs ten minutes later, my entire visage ‘concealed’ in my mother’s £30 YSL Touche Éclat, she was not best pleased. But I was, because in the depths of my Mother’s makeup bag I’d discovered an exciting new world of grooming unbeknownst to most men.

And I didn’t look back, but I did learn how to blend. After being so dissatisfied with my teenage-boy skin, foundation became my miracle-in-a-bottle cure for insecurity and self-consciousness. And I’m not alone: 1 in 10 British men now admit to using makeup regularly. Of course, they only admit to it ‘secretly’. Indeed, it was a secret that sixteen-year-old me guarded fiercely. ‘Ashley… are you wearing foundation?’ would be the oft-asked question that hit me like a wet-wipe to the cheek. ‘No, of course not!’ I would lie, rubbing my lips together to make sure my lip tint wasn’t too obvious.

Really, I don’t know why I ever bothered denying it. I was, and am, about as masculine as a Barbie’s tea party, and a little cover-up was hardly going to affect my reputation. But it was a lie I stuck to ferociously, even though the egg in question was, quite literally, all over my face.

The reactions from those who noticed were amused or bemused, and I continued to feel ashamed for a long time for using something that simply wasn’t intended for me. I stopped wearing it altogether when a girlfriend told me she wouldn’t continue our relationship if I insisted on wearing makeup because it ‘just wasn’t attractive for boys to do that’. And when it didn’t work out between us (surprise), I was straight back to the foundation bottle, and added a bit of mascara for good measure. If I was feeling extra ‘fuck the system’, I might reach for the lipstick. Scandalous.

Before all this, my male privilege was seated quite complacently on the other side of the glass ceiling, and had seen no reason to be checked. I had, for the most part – not including a healthy penchant for Alanis Morrissette – subscribed to the gender role I had been assigned with at birth. I suddenly became aware that there aren’t “things for men” and “things for women”; it’s all performativity and social constructs. After reading Judith Butler until my brain oozed out of my ears, and later, Angela Carter’s novels, I suppose I realised I didn’t really need a box to fit into, just a box of makeup to apply to my face at will. Funny what a bottle of L’Oreal Infallible can do to a man.

So my privilege got a little bit bruised when I started putting the slap on, because all of a sudden I felt hotly defensive about boys not being able to wear makeup if they wanted to, when women, by contrast, were expected to do so. In a roundabout way, I think it was the first, clumsy glimmer of feminism that twinkled in my eye. A realisation that things aren’t equal; that our penises and our vaginas tie us down here and there. Indeed, it was something that had eluded me as I’d seen the girls in school running across the playing fields at lunchtime, away from the boys that were slapping them hard on their arses and trying to grope their tits for fun. Like that was a normal way to spend a lunch break.

Obviously it wasn’t just makeup that made me realise that was a bit fucked up; maturity and common sense played a part too. But it did give me a level of understanding, however menial, that gender could be a disadvantage. In school, if you were a girl and didn’t wear makeup by the time you reached Year 11, you were pegged as a freak. Leandra Medine, author of successful blog The Man Repeller, doesn’t wear makeup, and has been dubbed both ‘brave’ and ‘ugly as fuck’. Makeup can be a difficult one when it comes to the gender gap. Because our good friend the media believes it is news when women go to the shops makeup-free or if a man wears lipstick. This differential treatment supports the idea that men don’t need to bother with their appearance, because ‘being a man is about brains, brawn, and work, not about looking cute,’ and being a woman is all about the pressure to be cute getting in the way of everyday life activities like going to the gym.

The concept that a woman going ‘makeup-free’ is unusually brave, is at best an upsetting reality of the heavily gendered world we live in. At worst, it’s an attempt at making women feel insecure about themselves: women are to be kept absolutely sure that their naked face isn’t acceptable to show to the world. Men, on the other hand, will be sneered at if they cover up their face. It’s okay, even encouraged, for women to be insecure, but not for men. For men to be insecure goes against everything the patriarchy means.

These double standards signify a wider, general aversion to the feminine. The intrinsic prejudice that runs deeply through society, that Owen Jones touched on in his article about the widespread ridicule of Alan Carr’s campness by gay men: the ‘alleged self-loathing’ that many gay males feel, the ‘anti-camp bashing’ of feminine men that ensues. RuPaul’s mantra ‘you’re born naked and the rest is drag’ never seemed so apt. It’s a take on the old Shakespearian ‘all the world’s a stage’ maxim. Except for the majority of us, our scripts are already written, and defaulting from the rules carries consequences. The prancing self-conscious fairy isn’t a role anybody respects.

Noughties electro synth starts to pump through my head, and I’m worried I’m beginning to sound like a Madonna song – I’m reminded of the dramatic monologue at the opening of ‘What It Feels Like For A Girl’:

To put it into perspective of how far things have progressed, that was sampled from The Cement Garden, a film made over twenty years ago, and the book it was based on by Ian McEwan was written in 1978. And I’ve still overheard ‘why the fuck is that boy wearing nail varnish?’ as I sat on the train minding my own business this year, my nicely painted nails clasped over my book, glinting in the sunlight. A smile might have flickered across my face, but all that prescribed gender bullshit had grown stifling over the years. Resisting it had stopped feeling rebellious, and had just become normal.

11 thoughts on “Make-Up Made Me a Feminist”