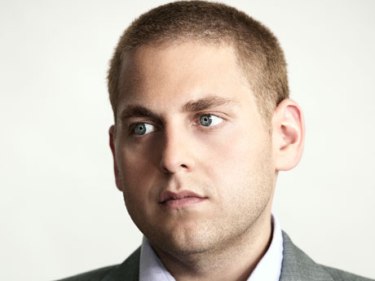 Inspired by Esquire’s legendary competition, of which Scarlett Johansson was the winner, The Vagenda sends its intrepid Hollywood correspondent LA DAME to interview our SEXIEST MAN ALIVE

Jonah Hill is drinking a green juice. He makes a heart shape with his lips and welcomes the long straw. I watch, and when he looks up at me, he offers a knowing smile. I feel like he knows what I’m thinking. And then I’m embarrassed.

The Tribeca Equinox Juice Bar is brightly lit, I can see everything in clear detail: but with Jonah, I feel like I can’t see too much. He just worked out with his personal trainer upstairs. He wears a black pair of Adidas track pants and a lime green tank top and his cheeks are flushed pink from the recent exertion. From across the small table, I can almost feel the cloud of moist man emanating toward me. The testosterone makes my nose tingle. He says something, but I’m too busy counting the drops of perspiration in his visible cleavage to comprehend. I snap to it and ask him what it was he asked me.

“Do you live close to here? I hope it wasn’t inconvenient.” There’s gravel in his voice. This must be how he speaks to women in the morning. After he’s spent a night making love to them.

I assure him that the hour and a half I traveled from Queens, the three transfers, were well worth it. He smiles at me and nods.

His cell phone rings. “Excuse me,” he says politely, as he leaves the booth to take the call outside. I wish I had worn my sunglasses because it would be easier to blatantly check out his ass as he ordered at the counter. That ass. The luscious ass I have seen countless times in his films. That movie star ass. As I am, sunglass-less, I make an effort to avert my eyes. I am, after all, a journalist. He is, after all, my subject.

He is also The Vagenda’s Sexiest Man Alive.

He returns. “Sorry. My manager.” Eye roll. He’s back to sucking on that juice.

He tells me a bit about growing up in Los Angeles. We talk about pets. I ask him if he’s more of a dog-like person or a cat-like person.

I tell him it isn’t obvious. There are so many variations within the dog species that to say you are a dog-like person isn’t actually very descriptive.

“Oh,” he says, thinking about it. I wonder if I’ve been too harsh. I didn’t mean to imply he didn’t know that much about dogs.

I ask him what type of dog he thinks he would be.

This question perks him up, his lips spread, revealing his small clean teeth. “If I was a dog hmmm…I mean, I’m loyal, cuddly, I love the water…hmmm.” He puts a finger to his temple, willing his brain to think, dig deeper. “A black lab – no – a chocolate lab.”

Loyal….Cuddly…I imagine us both as dogs, Jonah as a chocolate lab, me as a slender Doberman Pinscher, frolicking in the waves together. Then a thought comes to me…

So here I am: on the beach with Jonah Hill.

Whether he is skinny Jonah or curvy Jonah, he knows how to wear a swimsuit. The Nike Rash Guard clings in all the right places as he frolicks in the waves.

“I always wanted to live on the beach,” he says. “I used to love coming here as a little kid. Never dreamed I could afford it!”

I’m listening so intently that I don’t notice a large rogue wave until it’s too late. By the time I open my mouth to warn him, he is already being knocked forward onto the wet sand. I stand, out of reflex, hoping he is okay. I’m worry about his safety. Why am I so invested? What do I care if this movie star scratches up his knee? Herein lies the truth about Jonah Hill: Jonah Hill sucks you in. I cry out, maybe a little too loudly, and ask him if he is okay. He props himself up on his elbows, and whips his head back, a spray of saltwater flying from his delectable brown mop, and giggles. “Whoops.”

Now Jonah Hill is walking toward me. There’s a slight breeze. He’s smiling. Everything is in slow motion. Have they moved Eden to the Pacific Coast?

“My publicist said you might want to talk to me about weight fluctuations. That was one of the talking points.”

I tell him we can talk about whatever he wants. I have all day. He sits down beside me on the large, fluffy towel he produced from his linen closet earlier, his favorite towel, he said, and I can see why, it’s so thick and soft you can run your fingers through it. This is what he does now, laying on his back, looking at the sky, running his thick fingers through the fluffy towel. I tell him that he looks great all the time, no matter how much he weighs. I think I use the word sexy.

Now we are in Jonah’s bedroom. Everything is white and pale blue and it smells like sea spray. I’m not sure if this is because there’s a set of open French doors that face out over the balcony and ocean beyond, or if his housekeeper is using some sort of amazing sea scented eau de toilette on Jonah’s bedspread. I consider asking but decide against it.

I want to sit down on the edge of the bed, but I wonder if it’s not professional. So I stand, with an elbow on his dresser.

“I know it’s somewhere in here,” he says. I watch as he removes a stack of three wooden cigar boxes from the top shelf of his closet. He kneels down on the floor, his heels and toes peeking out from under his terry cloth robe. To my knowledge, he is only wearing this robe. He is naked under there.

“I got these boxes in Cuba,” he says, opening up the top box and rummaging through.

Now Jonah is going through the second box. There’s a cute furrow in his brow, conveying his great sense of focus and concern: he really wants to find this for me. Instead of taking a shower, which he mentioned he wants to do (I wonder if I’m invited), he is looking for a specific prop that I told him I would really like to see.

He is placing my needs above his. At least for the moment.

I don’t interrupt. The second cigar box has a few dried flowers in it. I wonder who gave those to him. His fans? His mother? His prom date? I take a deep breath to exercise that ugly spike of jealousy.

I look to him. He’s got it. He’s holding it in his hands like a samurai holds a highly prized sword.

The one that Jonah, as the character Donnie Azoff, strokes wildly in the midst of a Hamptons party scene in The Wolf.

“Marty let me keep it when we were done filming.”

My cheeks start burning as he hands it to me. It’s surprisingly realistic: the weight, the texture, the eighty percent hard-on solidity of it. I hold it in my hand, wanting to grip my fingers around it, but also self-conscious of coming on too strong. Keeping my eyes fixed on the object, I comment on how real it is.

“Mine is a lot bigger,” Jonah says.

I look up, all words having left me, and look into Jonah’s baby blue eyes. He has me there, suspended in his gaze like a fly on a strip of flypaper. He giggles suddenly, and brushes my cheek with the back of his hand.

“You’re cute when you blush.”

10 thoughts on “My Visit With Jonah: THE SEXIEST MAN ALIVE”