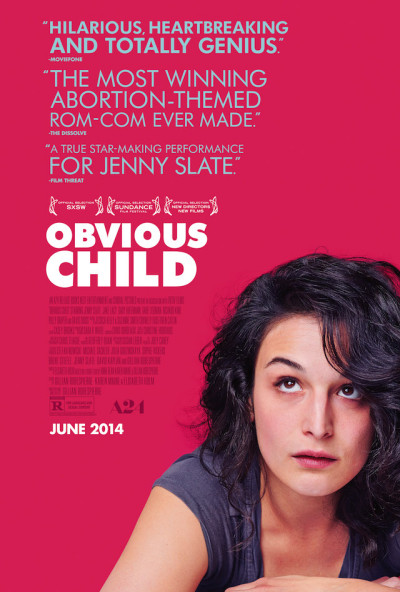 When stand-up comedian Donna Stern (Jenny Slate) gets knocked up after a post-break-up one night stand, there’s no debate or quivering moral compass on the fate of her fertilised womb: she’s going to have an abortion.

Max (Jake Lacey) aka ‘Pee Farter’, is the guy she’s bumped drunken uglies with and is a straightlaced, starch-ironed boy who, despite his efforts, doesn’t quite match up to her sass. It’s refreshing to see Donna dismiss this Jon-Boy Walton; after all, Prince Charming is so last lifetime. It’s also nice to see Donna’s lack of apology in banging away heartbreak with an unsuitable suitor – because yes, women do that too.

We’re soon invested in how Donna will orchestrate this termination, both practically and emotionally. Will she tell ‘Pee Farter’ ? Will her divorced parents (Polly Draper and Richard Kind) and cosy network of friends be informed? For a woman who makes a career from verbal diarrhea – you bet.

Writer and director Gillian Robespierre has presented women as real beings in this film, and Donna is everything the ‘Manic Pixie Dream Girl’ wishes she could be. She likes sex, can tell genuinely funny jokes and doesn’t feel guilty about eating spaghetti. She’s beautiful, but isn’t subversive, and isn’t afraid to admit when she needs to flatulate (but she’ll at least give you warning). She’s an adorable mess but still very much the captain of her ship and it’s good to see a film exercise the liberty of abortion as a black and white choice. The emotional and moral politics of what she should do with her womb is hankfully shunned.

In Obvious Child, it’s Donna’s mum Nancy who provides the yardstick, highlighting the change in how abortions were once administered – i.e illegally and dangerously. It’s an appreciative nod to how things did improve for women with unwanted pregnancies in the US, and although gentle, is significant in a time when women’s access to reproductive services is being needlessly challenged again.

We’ve had accidental pregnancy movies before, the most notable of those being Knocked Up. However, considering the baby was due to slop out of a woman (Katherine Heigl), the film was ultimately about a man (Seth Rogan). More recently, Jill Soloway’s Afternoon Delight (2013) featured a frank conversation between women asking each other who present had gone through with an abortion. It was as casual as asking who had sucked tea through a Penguin Biscuit. Watching that one conversation felt like more of a breakthrough than a million Seth Rogans with the incompetence to pull out in time.

One in three women have had an abortion, yet, as we know, it’s still something that remains whispered in hushed tones. The subject presented in rom-com format, and from a female perspective, is a welcome stranger to the big screen with its refreshing tone of voice and skill of fusing profanities with the poignant.

Obvious Child is enjoyable, important, thoughtful and most of all, funny. Abortions aren’t a picnic, but along with the right to a safe termination, we’ve also got the right to find the funny side of life after death.

4 thoughts on “Film Review: Why Obvious Child is the Best Abortion Flick You’ll See All Year”