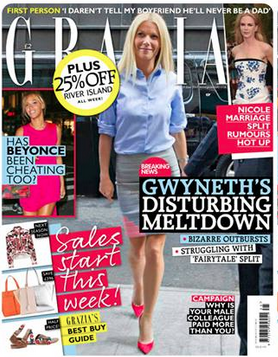 Was there ever a more tantalising coverline than ‘GWYNETH’S DISTURBING MELTDOWN’? If so, I haven’t seen it. Even the ‘BEYONCE MARRIAGE MELTDOWN’ (e-acute was missing, natch) of a few weeks back failed to plough the depths of female celebrity suffering to the standard that I have come to associate with Grazia. Thankfully, they are back on form, with a special report on Gwyneth’s ‘bizarre outbursts’, one of which took the form of a Goop post implying that water had feelings. Yes, I really did just type that.

According to the post, Gwyneth is fascinated by ‘the growing science behind the energy of consciousness’. Somewhat ironically for a consciousless being, Grazia sees fit to highlight this as mounting evidence of some kind of mental collapse. It is ‘an odd thing to say in public’, announces Grazia, but ‘it could be argued harmless enough.’ HOWEVER, couple it with comments made by Paltrow that compared the experience of being trolled on the internet to fighting in a war, and you’ve basically got enough ammo with which to section her.

As anyone on Twitter will no doubt be aware (99% of journalists, 5% of normal people) this prompted something akin to a (virtual) war, with Paltrow being (virtually) flamed and firebombed by a number of (actual) soldiers and veterans as a dumb privileged airhead who should keep her dumb rich whore mouth shut. Meanwhile, the rest of us stood by and witnessed the long-awaited death of metaphor as a rhetorical device, thanks to a humungous twitter hand grenade, followed by the building of a gate to the entire internet emblazoned with the words ‘those who seek nuance must look elsewhere.’ Fuck.

Of course, none of this really accounts for the fact that, METAPHORICALLY SPEAKING, being a woman on the internet is, actually, quite like being in a war. Granted, having macho, numbknuckle men electronically inform you how they want to rape, murder and dismember you on a regular basis is not the same thing as being raped, murdered and dismembered in a warzone. Anyone who is not an idiot knows this. There is a conference in London this week being hosted by Angelina Jolie on the use of sexual violence as a weapon in armed conflict – this is a serious issue affecting and destroying the lives of women across the globe, and it’s nowhere near on a par with being told that someone wants to stick a rocket up your cunt on Twitter (an actual tweet we once received). But there are parallels to be drawn. All kinds of abuse can have a duhumanising effect. The existence of one form of abuse does not negate another. I can’t believe I am having to say this.

Not that Grazia is interested in any of this, mind. Instead, they use it as evidence that Paltrow is ‘pushing some virtual self-destruct button’ (the latest magazine slang for ‘being a woman and expressing an opinion’ I assume?) because of her break up with Chris Martin, which has, it is heavily implied, sent her insane (if being insane now = saying ill advised things on twitter, I can think of a few more people in need of giant butterfly nets, stat). The rampant speculation continues on for another two columns or so, but here’s a summary of the rest of the article:

Elsewhere in Grazialand, they’re suggesting that you wear a dress that looks like a towel. I kid you not. It may even LITERALLY BE a towel. A £950 towel. How anyone can take anything they say seriously is beyond me.

In other female suffering news, Nicole Kidman and Keith Urban may be heading for divorce. The evidence for this? ‘Apparent flirtations with other women.’ Note the use of apparent, legal eagles, for this is nought but boundless gossipmongering, as is the accusation that Beyonce ‘HAS BEEN CHEATING TOO’ through the medium of allegedly ‘banging her bodyguard’ with whom she has been ‘spending a lot of time behind closed doors’ in a manner which displays no links to the nature of his profession or hers. No, it’s to do with sexy time, obviously. It’s scintillating stuff, made only more scintillating by the fact that the bodyguard’s name is ‘Julius.’

Peek behind another Swarovski-encrusted closed door, and we will allegedly find Kim Kardashian’s ‘booty room’, a room, for those of you in any doubt, entirely dedicated to her arse. Newlywed Kim ‘wanted to ensure that she had a space of her own, and a booty room seemed like the logical choice’. Yes, very logical. She has also, apparently, hired a ‘bum expert’ at great expense. She could have saved some money by getting with my ex, whose fascination with my back end was such that it shed doubt on his cognitive awareness of the existence of my face. It was as though he has one of those facial blindness conditions from ‘The Man Who Mistook His Wife For a Hat’. Perhaps I should write a book entitled ‘The Man Who Mistook His Girlfriend’s Face For an Anus.’

Then again, as the existence of the ‘bum facial’ attests, Kim is already battling most of the population on that one (incidentally, when, on page 34, Grazia asks ‘CAN YOU REALLY BE FRIENDS WITH AN EX?’ the answer is not a binary ‘YES’ or ‘NO’ as offered by Grazia, but an ‘ABSOLUTELY NOT. HE SPENT THE ENTIRE DURATION OF OUR RELATIONSHIP TRYING TO REAM ME UP THE CAKEHOLE, AND THEN ACTED LIKE A TOTAL DICK DURING A DISPUTE ABOUT COUNCIL TAX. I HAD TO MOVE TO ITALY TO GET AWAY FROM HIM, THOUGH HE WAS THE FIRST GUY I SHAGGED WHO HAD A SIX PACK AND HE DID INTRODUCE ME BORGES SO THAT WAS A BONUS.)

But back to Kim’s arse. I feel that I have actually become more stupid since reading this article. By the time I reach the end of the magazine, I’ll probably need to retake my year six SATS.

Thankfully, by page 45, Grazia has upped the intellectual ante by launching a campaign against the gender pay gap. I have absolutely nothing snarky to say about this. Fair play, guys. Fair play.

It’s good to see magazines embracing feminism, every little helps after all, and we’ve always said that our ultimate goal is not to render them obsolete but rather ourselves. If The Vagenda didn’t need exist, then it would be an indication that women are getting the media they deserve. Unfortunately, we’re still in a place where Edie Campbell is being denigrated for her ‘mullet and crazy trousers’ which make her look ‘just a bit circus clown.’ Caley McWilliams, another Grazia fashion jury member, goes further when she says: ‘This looks like a pair of mismatched pyjamas. Disappointing.’ Yes, she actually uses the word ‘disappointing’ to describe another woman’s outfit. She’s basically saying: ‘Sorry lady, but your sartorial choices have failed to live up to my entirely subjective views on what is aesthetically appealing, to the point where it may have ruined my day. Your autonomous choices have failed me, and I feel very let down.’ Bizarre.

Grazia also has a piece entitled ‘Don’t call us hipsters’ about how calling a hipster a hipster is no longer, er, hip. ‘My beard just sort of happened’ says Ricki Hall, 26. Good to know Ricki, good to know. Polly Vernon has some thoughts on fertility, and there are two ‘real-life’ confessional stories – one from a woman who has lied to her boyfriend about being able to have babies, and another from a woman whose intrusive thoughts tell her to push men under trains. This bring the Grazia female suffering quotient to a potential peak of six and, while I’m glad that they are covering serious issues affecting women in Britain today, I’m discomfited by the niggling feeling that, were either of these women celebrities, their stories would be framed in an entirely different way. One woman’s ‘DISTURBING MELTDOWN’ is another’s harrowing true life experience, and if that isn’t evidence of the dehumanising nature of celebrity coverage, then I’m not sure what is. You’d need to ask Gwyneth, if they haven’t carted her away by now.

6 thoughts on “Gwyneth’s Meltdown, and The Man Who Mistook His Girlfriend’s Face for an Anus”