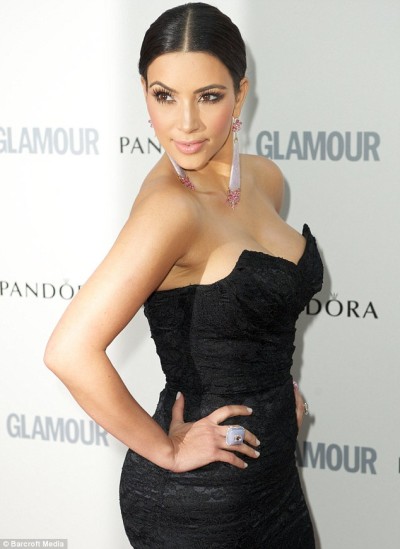 But even Kim still didn’t look good enough to get married. It’s not clear who decided that. It can’t have been the future Mr. Kardashian né West, who, from the looks of all the Instagrams that he takes of her bottom, clearly thought she looked nice enough to marry anyway. It definitely wasn’t the magazine-reading public, who are already perfectly aware of how she looks, having been exposed to two million or so pictures of her a day (conservative estimate) for some years now and are in agreement that yes, she looks good, can we think about something else, now? Could it be that it was Ms. Kardashian herself who thought she didn’t quite cut the marrying mustard? (I don’t know her, she is not my friend, so I refuse to call her ‘Kim’).

Here’s a depressing thought: perhaps, even as someone commonly regarded as one of the most beautiful women in the world, she still felt that there was no way she could put on a pretty dress and say her vows without there being at least two inches less of her. Maybe she thought a period of starvation before the big day was the sensible route? After all, 84% of women diet before their weddings; why should the woman to whose figure so many already aspire be exempt?

‘A diet?’ Cried the mass media. ‘An EXCELLENT decision’. And so began a well-documented regime of low-carb dieting, high cardio exercising, and, er…corset training.

Corset training? YES YOU READ THAT RIGHT. The Corset Diet is a real thing, brought to you courtesy of the Hollywood Hellmouth so that you TOO can feel just as inadequate and scrutinised as Kim Kardashian, Jessica Alba, Gwyneth Paltrow and all the’ diet’s’ other rumoured fans.

Here’s the idea: you pick up a copy of yesterday’s Daily Mail, which features a massive front-page story entitled ‘How Women’s Bodies Have Ballooned Since the 1950s’, and conclude that you are indeed a big fat lardy heffalump. You then purchase a special diet corset. This isn’t any old corset, mind, but a specially formulated one, starting at $90. Said heffalump (that’s you, babe) dons one of these super-corsets and instantly achieves a slimmer, svelter, more rib-crushing look. What’s more (and here’s the real wonder of it), the corset stops you from overeating. In fact, the corset makes eating, breathing, coughing and moving all such uncomfortable activities that you simply have no choice but to lose weight. AND you get to wear sexxxy lingerie, as the manufacturers remind us by illustrating their website with pictures of women in their undies, natch.

At last the pretence that fad diets promote health and wellbeing is cast aside, since the hapless corset wearer can no more exercise than tie her shoes without a buddy. That’s not to say that there aren’t some enthusiastic fans. In the most apt typo maybe ever, the manufacturers give us the glowing testimonial of Caroline “fettered in the Daily Mail”, whose fetters allow her to shrink her flumpy dumpy 27 inch waist (THAT’S A SIZE 10 GUYS) down to a more acceptable 25. All thanks to those corset bones “firmly sucking ” in her organs (/displacing them) so that “every mouthful she eats will take effort”. Doesn’t that sound FABULOUS?

The Mail just can’t get enough of mother-of-one Caroline’s brand spanking new figure and gives us a helpful guide to the corset technique. The interviewer comes close to serious reflection at one point, reminding us that corsets were “once… condemned as ‘instruments of torture’ and symbols of male oppression over women’s bodies” before floating on by. After all, laughs Caroline, “I’m not in any pain at all!” So it’s all cool, yeah?

What a lark it is to mock these silly women, driven back to the 19th century in pursuit of a perfect figure. There’s another one in today’s paper: ‘Woman who wants to look just like Jessica Rabbit wears TINY corset 23 hours a day.’ ‘Bending, sitting, and lying down can also be a struggle’, we are informed, as we wince at the painful-looking pictures.

What I find most disturbing about this little craze is that it’s a bit…you know… appealing. I mean not really, but for all my feminist credentials, I can’t pretend the idea of a rib crusher doesn’t appeal to some very nasty little part of my subconscious. When I read that the Mail’s token fraidy-cat doctor has “concerns” about permanent damage, my little lady brain pipes up with “yeah, but I want a 20 inch waist dude”. JUST AS I’M SUPPOSED TO. And that, my friends, freaks me the fuck out.

As with much of the media focus on women’s bodies, the reporting of the corset diet is chockablock with numbers. Caroline has a 27-inch waist, Kim Kardashian weighs 125lbs, and so on and so on. Heights, weights and measurements are fetishised by the publications and memorised by the readers. The wonder of focusing diet chat around numbers is that it provides instant opportunity for self-comparison. We can already measure the value of a woman in pounds, inches, body fat %, dress size and years – now to this we can add her corset size, since these diet corsets go down to an 18″ (average waist size of a 2 year old, FYI). And it works, because when I read that mother-of-one Caroline has a 27 inch waist I had two thoughts: 1) Wow, that’s crazy, she’s really slim, and 2.) Haha my waist is smaller than hers by a whole inch, I WIN.

How fucked up is that?

Of course I know this. But there’s still a tiny bit of me that would give the integrity of my internal organs for a 20-inch waist. Again, just as I’m supposed to. I challenge any woman who’s grown up in a culture that can produce ‘The Corset Diet’ not to be a tiny bit seduced by it, even a woman as beautiful as Kim was taken in (yeah we’re on first name terms by this point). So much as I want to say ‘fuck you’ to the Corset Diet and all of the celebrity hype surrounding it, the sad truth is that on one level, I want the same results. And that scares me even more than I can even say.