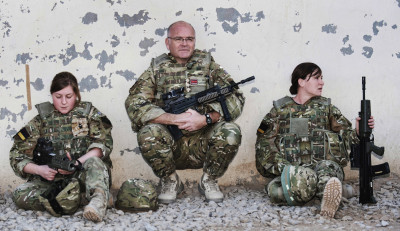 So, I have a close male friend who is in the Army. As a matter of fact, I am also in the Army, but no, this isn’t going to be your workaday rant about sexism or an excess of lad culture in the forces. In my experience, the British Army’s zero-tolerance policy to any form of discrimination – be it discrimination against gender, sexual orientation, race, or religion – is actually highly effective. But I digress.

This friend in the Army. He’s going on an assessed exercise next week, off for a few weeks of running around with rifles and crawling in the mud, to be tested on how well he can boss people about. Now, I happen to have already done this particular exercise before, because I am – *GASP* – a female who just so happens to be more qualified than a male counterpart. In the process of imparting a few gems of wisdom unto him, because I’m a good friend like that, I learn that he has recently sustained an injury during a particularly aggression-filled (and apparently vomit-filled) match of hangover-rugby (WHEYYYY, LADS, LADS, LADS!)

I listen as he describes his injury: some kind of bruising to the ribcage. It’s causing him a significant amount of pain. An injury is never a good thing a few days before you’re set to go on an exercise. I’m not a doctor or anything, but it’s starting to sound like something along the lines of internal swelling (no jokes at the back.) He says he’ll just have to dose up on ibuprofen and get on with it as best he can.

I nod sympathetically, and think back to times when I’ve acquired similar injuries during training. I’ve always relied on Naproxen to get me through swelling related dramas. I tell him he needs to get some before he leaves. Naproxen does pretty much the same thing as ibuprofen, but I have always found it to dull the pain more efficiently, and reduce inflammation faster.

There’s one problem though – I think you usually need a prescription to get Naproxen. I inform him of my concern, and he has, typically, left it far too late to arrange a doctor’s appointment and get the injury seen to properly. But WAIT! I remember that one can, actually, pick Naproxen up off the shelves of one’s local Boots, Superdrug, or generic supermarket. I tell him such, and he is all ears, saying he’ll go into town tomorrow and get some if I think it will genuinely help him out.

I then inform him of the second problem. The Naproxen that you can pick up in Superdrug is not sold under the name “Naproxen.” It is, in fact, sold as… wait for it… “FEMINAX.” It is marketed as pain relief from menstrual cramps. For WOMEN. Who MENSTRUATE. I duly inform him of this, and the horror which greets this revelation is almost tangible. ‘FUCK THAT,’ is his exact response, in all its articulacy.

Even after explaining that Feminax and Naproxen are EXACTLY the same drug, just sold in different packaging and under different name, my friend’s aversion to venturing into the female health section of a shop is still strong. ‘I DON’T get periods, ergo I am NOT going to buy Feminax,’ is his line.

‘Whatever,’ I tell him, ‘I was just making you aware that there’s something out there which might just be more helpful than ibuprofen.’

He never even gave me the chance to explain that back in the day, they used to give mefanamic acid (another anti-inflammatory pain reliever) to the lads struggling through P-Company, the physically brutal and mentally gruelling selection process to get into the Parachute Regiment. Now, I am currently prescribed mefanamic acid for severe period pains – but a few decades ago (sold as ‘Ponstan’ back then, because why not?), hard-ass soldiers aspiring to earn that coveted maroon beret would pop those pills like they were going out of fashion.

Later that day, I receive a Snapchat (a phenomenon which I feel deserves its own Vagenda article, due to its tendency for being a medium primarily geared towards requesting nudes from females, and distributing unwarranted dick pics on an unprecedented scale). Voici le Snapchat: 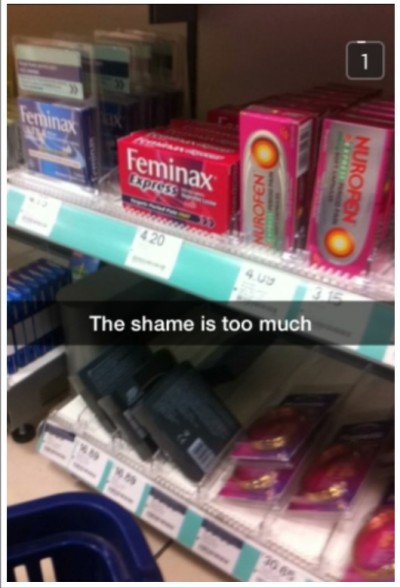 I screenshot the Snapchat because I felt that the allotted ten seconds are not sufficient to adequately ponder its contents. Portraying shelves full of various pink-cardboard-packaged products, the sender is clearly in the feminine products aisle (because how else would we know that the tablets were intended for us unless they were fuchsia pink?!) I mentally praise my friend for summoning enough bravery even to venture into such uncharted feminine territory, and think to myself, ‘No wonder he couldn’t bring himself to buy it! Imagine how embarrassed he would have been at the checkout! Especially when the cashier quizzed him about the tablets, as they so often do with the purchase of painkillers; he’d have to either explain what he needed the Naproxen for, or say he was buying it on behalf of an ACTUAL FEMALE!  I totally understand his Feminax-related struggles!’

And then the other half of myself speaks up. ‘STOP RIGHT THERE. HALF THE POPULATION have periods. Why should I be understanding of his embarrassment? Let alone, why should I be able to relate to it?! I frequently find myself opting for the self-checkouts and choosing to battle those frustrating “unauthorised item in the baggage area” moments, rather than presenting my shameful tampons to a real-life cashier in a guilty acknowledgement that yes, once a month, I do in fact bleed out of my vagina. Just like half the people in the world do/ have done/ will do. I know I shouldn’t find it embarrassing, but I do. And frankly, the fact we still blush about purchasing period-related products is ridiculous.’

Discussing the embarrassing transaction of buying tampons with a different male friend resulted in confusion. This other friend – who, in fact, left his military training because he hated spending so much time cold and wet and miserable and being screamed at to “FUCKING GET A GRIP!” (Ed: How did he survive high school?!) – hypothesised that embarrassment over periods is like embarrassment over farting, or any other bodily function. Everyone does it, but it’s still embarrassing.

But is it really comparable? Scatological humour can have immense comedy value, for one thing. Think of all the films you’ve seen which contain some variant of fart/ shit/ vomit-themed comedy. LOADS (this may, obviously just be me… possibly because I have a penchant for immature comedy films and slapstick humour). But the monthly visit from Aunt Rose? That’s a no-go humour zone, especially around men.

Within my circle of friends (which consists primarily of military-minded men), I’m expected to find their ‘bantz’ about penises/ wanking/ balls/ all of the above in some sort of weird combination absolutely double-me-over hilarious (which, to be fair, they often are), but the second I make a wisecrack about menstruation, it will be inevitably met with stony silence. Periods are an unspoken shame we’re expected to guiltily brush under the metaphorical rug. In fact, the lengths that I’ve gone to in order to hide the fact that I’m in an emotional, bleeding, aggressive state from my male colleagues while on longer training exercises know no bounds. The most memorable was the time I informed everyone I had a case of the shits to legitimise my frequent disappearances off into the woods to ‘deal with stuff.’ A case of the shits has banter potential. Periods do not.

The caption on the Snapchat perfectly encapsulates this. As it says itself, the shame is TOO MUCH. What shame is that, really? The shame of being stood in the feminine health aisle in the first place? The shame of admitting you’re injured? The shame of the cashier potentially presuming you’re buying pain relief for a period-stricken girlfriend/sister/mother/friend who hasn’t had a chance to get to the shops? The shame of buying a product marketed for women? The shame of the other Army Lads finding out you’re using Feminax (aka NAPROXEN) to get you through the exercise? Who would have thought that that prefix “femi-” could be so psychologically powerful?

I find this especially bizarre, considering the fact that this friend is hands-down the most respectful person I have ever met. He treats all the female soldiers he works with exactly the same as the male soldiers, he thought Maggie Thatcher was a goddess (Ed: PROBLEMATIC, but I get the picture), and he would never consciously do anything to disrespect a woman in any way. Given all this, I don’t understand how he can still subconsciously subscribe to the concept that this essential aspect of femininity is shameful.

But whatever. His loss. He’ll be on exercise by now, probably soldiering on with his damaged ribcage, through the pain which will still break through the meagre defences of ibuprofen, wishing he’d overcome whatever ludicrous masculinity complex he has and just gone ahead and bought the Feminax.

I can’t help but think that it’s funny how someone can be absolutely fine with the all the challenges of working in the armed forces, but is terrified by the thought of taking pain-killers that come in a pink box.