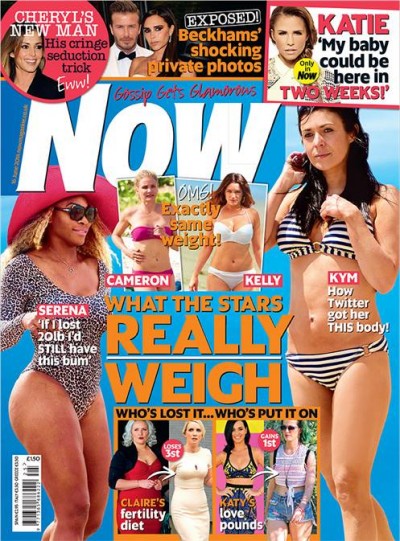 I’ve been meaning to write about this issue for Now magazine for about two weeks, but I haven’t, because I have been on a diet, and have felt lightheaded most of the time. I realise that this is a rubbish thing for someone who writes frequently about body image to be admitting, but the truth is: this affects me too. To an alarming level.  Indeed, it’s probably why I feel so strongly about media body fascism in the first place. It’s probably why I co-authored a whole book about it. It’s probably why I am writing this now.

I have been on some kind of diet for the last two years, on and off. The type of diet and how long I have been on it has varied, but it’s usually triggered by one, or a combination, of several factors:

- Not being able to fit into an item of clothing which, at a much younger age and possibly after a bout of stomach flu, I used to fit into comfortably

- Reading something in the media, such as this Now magazine corker ‘WHAT THE STARS REALLY WEIGH’, and feeling so terrible about my body that I resign myself to a life of Ryvita and laxative tea

It’s the latter ‘trigger’ that I’m most put out about. I can rationalise to myself, just about, wanting to lose weight because your clothes no longer fit or because you felt you looked better at a lower weight, because at least there is something reflexive about that process. Yes, the weight anxiety may partly be created by outside influences. Nevertheless, the first two ‘triggers’ at least feature some element of self-improvement/money-saving motivation.

But going on a diet because of some bullshit article in a raggy magazine? That pisses me off.

And yet, it works. It’s a process that we jokingly refer to in our book, The Vagenda: A Zero Tolerance Guide to the Media, as an ‘insecurity bomb.’ One minute you’re fine, and the next, BAM, you’re putting in an order for £200 worth of raspberry ketones on Amazon and wrapping your body in clingfilm like Madonna does(n’t) every night.

A couple of weeks ago, when I opened that copy of Now magazine and came to the crushing realisation that I am not hovering around the 8 stone mark, like many of the celebrities that it featured, I experienced a feeling of failure that has become all too familiar to me. I felt as though, as a member of the female sex, I just wasn’t cutting the mustard. I felt as though I was taking up too much space. It felt as though I needed to be less.

In fact, such was the self-loathing reaction this magazine provoked in me that when my flatmate’s girlfriend picked it off the table and started flicking through it, I ran towards her yelling, ‘LEANDRA NO!!! DON’T DO IT!!’ as though it was a live hand grenade rather than a glossy magazine. I’d taken the bullet this time.

My feelings about dieting are hard to articulate, because, although as Emma VItz,  one of The Vagenda’s contributors recently pointed out on this blog, falling victim to body fascism is nothing to do with intelligence, and telling a woman that she is ‘too clever to fall for this shit’ is condescending crap. Because said shit is EVERYWHERE, we are still led to believe that this is true, that everything is unavoidable if you just use your brain. But is it true? I am fairly intelligent, but I also think juicing might have the potential to change my life.

Some of the criticism of the book we wrote has centred around the idea that, in pointing out how damaging women’s magazines are, we are patronising the readers, who are perfectly capable of making their own minds about this stuff. Much of this criticism (well, what which didn’t come from journalists who completely coincidentally ALSO WRITE FOR WOMEN’S MAGAZINES) came from middle class women in their late middle age who were lucky enough to have benefited from much feminist consciousness-raising when they were attending their progressive Russell Group Universities – talk to a state school educated girl who grew up in the feminist vacuum of the nineties (hiya!) and it is, of course, a different story. I know crazy numbers of young, intelligent women (many of whom write for The Vagenda) who spend much of their time worrying about their weight and the way they look. Yet they didn’t realise that magazines were part of the problem until they sat down, usually while drinking shit-tons of Pinot, and suddenly turned around Columbo-style and thought nay, slurred, ‘Holdonafuckingsecondtheremate. What fresh hell is this?’

It’s not patronising to present an alternative narrative to magazine bullshit. It’s fucking patronising to tell women to ‘take their butt to bootcamp’. But you get so used to this stuff that you stop noticing it happening, and even when you DO notice it, it still gets to you. Or at least, it gets to me.

Which brings me back to my diet. Never underestimate the effect that a feature entitled ‘THIS IS WHAT 9ST LOOKS LIKE’ can have on your rational brain. The diet I am on, because of Now magazine and its ruthless chronicling of celebrities weights, is utterly ridiculous. It is, supposedly, a diet invented by the British Heart Foundation to give to obese patients before surgery, although the British Heart Foundation deny all knowledge of it. Now, I am a logical, educated person; I know that there is no ‘magic combination’ of food chemicals that facilitates rapid weight loss, and yet I am living off a strange combination of cottage cheese, grapefruit, ritz crackers, frankfurters and beetroot, all because I think being 10lb lighter will make me a better person.

Here are the facts: I am 26 years old. I am a published author. I write columns for a national newspaper. My BMI is 21.7 (but according to an Independent article from 1998 that I read this morning during a bout of self-loathing, the optimum BMI for sexual attractiveness is between 18-20. This bothers me). For the last two years, I have been trying to survive on less than 1,200 calories a day. In the last six months, I have ignored all attempts to get me on television, including Newsnight, because I think I will look fat on screen, and that people on Twitter will tell me about it later. This is, in all honesty, the only reason. I would quite like to go on television. I do not worry that I will have nothing to say, that I will be stuttering or inarticulate, but worry that I will be called fat. Fear of being called fat is the reason why I will now never be interviewed by Jeremy Paxman, who in the meantime has retired.

Here are the facts: I am hungry all the time, unless I am bingeing (insecurity comes in waves. I’m not saying I’ve been miserable throughout my whole twenties). Yesterday I nearly fainted at the doctors’. I am frequently tearful for no apparent reason. I am so hungry all the time.

I do not have an eating disorder, although at times, when I was younger, I came close. I am a healthy weight and am fully aware that there are young women out there suffering more than the pain of being too scared to go on television. But also I am angry that I am hungry. Despite being clever, despite being a feminist, despite having achieved some of my dreams: I am still hungry.

Why I am writing this now? I suppose it is because I want to illustrate how body insecurity can, in making you want to be smaller, stifle your ambitions, make you scale yourself back, curl in on yourself, feel worthless despite all the other things that you think should make you worthy. I suppose I am writing this because, since publishing our book, Holly and I have felt rather alone in banging this drum, in being young women coming up against a powerful media establishment in which our generation is barely represented and coming away bruised and belittled (but not broken, fuckers!) I suppose I am writing this because I know that there are loads of you out there who are hungry too, and that some of you are my friends, and that, if we weren’t hungry, we’d be able to achieve so much more than we already have.

But I haven’t got a clue what to do about it, except set fire to Now magazine in the back garden, and use it to light a spliff, and go to bed until tomorrow.

121 thoughts on “On Bikini Body Bullshit”