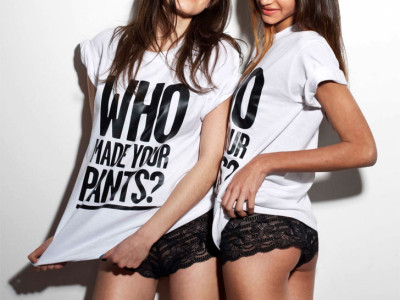 Something has been a-brewing on Twitter. Well, something is always brewing on Twitter. In fact, usually it’s boiling over – or in this case providing a mini explosion of sarky self-righteousness. Less ‘hubble, bubble, toil and trouble’ and more a case of aggravated shit stirring.

The topic in question? Pants. Lovely, colourful sustainable pants produced by primarily refugee women in Southampton, if you want to be more specific  - although many haven’t. They’re called Who Made Your Pants. Their business exists to provide skills, wages, advice and support for “women who’ve had a hard time” – with employees from countries including Afghanistan, Somalia and the Sudan. The factory is a safe women-only space, while the business model is an Industrial and Provident Society – basically a co-op. All workers can become members if they so wish – allowing them, to quote the website, to “co-own the business, [be] responsible for it, and… down the line when we are making masses of profits, share in those profits.” The pants, named after women including scientists and astronomers, are gorgeous, each coming with a label telling you who exactly made your pair. For more info on the great things they do, see here.

The problem? They did an inventive wonder woman-esque campaign the other day that provoked some nice 140 character chunks of nastiness. To summarise, this campaign – revolving around the idea of finding ways of promoting women’s underwear in non-sexy contexts – was apparently a combination of exclusivism (said pants are too expensive), didacticism (the ‘not about sexy’ slogan a judgment on all women everywhere and the naughtiness of their pants), shameless commercialism (‘jumping on the feminist bandwagon’ – because of course this bandwagon is a very exclusive type of transport that only a hand-picked selection of feminists can frequent) and general shaming of women into buying pants (as all know, promotion is the same thing as shaming. That’s why we all feel shamed all the time into buying ethical coffee, Fairtrade chocolate and flowers where the workers get a fair wage).

Sarcasm in brackets aside, several things are lacking from this type of vitriolic discourse, and many of a similar ilk on Twitter – firstly, research. Second, nuance. Third, empathy.

The first is self-explanatory. Don’t slate a ‘luxury pants company’ and make predictions over how much profit they’re making from commodifying feminism for capitalist ends before checking what said company actually does. WMYP doesn’t exist to make money. It exists to make jobs for marginalised women, in order to give them their own income. All profits are fed back into the business. Fucking awful, I know…

The second is interesting. Twitter becomes polarised so quickly. People like to air their opinions, and they like them strong. Much more fun and tribal and cliquey to be dismissive than engage in a dialogue, right? Much more satisfying to be pithy and cutting than celebrate, yes? Much easier to say that because feminist X supports campaign Y, campaign Y is tainted and awful and (whisper it) middle class. Well, here’s a surprise. There are many women, including some who are middle class, who can afford pants, and would like to buy gorgeous sustainable ones, so knowing that their money is going to a good place rather than a global conglomerate. There are also plenty of working class women who buy pants – and students who save up for a single pair because they want to (the cheapest are 12.50). Of course they cost more than a pack of pants from the supermarket, and there’s a reason for that.

But if you can’t afford the pants, that’s fine. Nowhere in any of the promotional material associated with WMYP can one find the OFFICIAL STATEMENT THAT ALL FEMINISTS MUST HENCEFORTH BUY SUSTAINABLE PANTS OR BE FOREVER FAILURES SHAMED FOR THEIR HEINOUS LACK OF SUPPORT FOR THE CAUSE. Just because you can’t support it (or don’t want to), doesn’t mean that others can’t. That’s the great thing about choice – it’s ours to make.

Another strand to the nuance – a campaign revolving around the idea of looking for non-objectifying ways of selling women’s underwear is not an edict. It is not an instruction. It is not a judgment. It’s not making a grand pronouncement that your pants can’t be sexy, flirty, cheeky, provocative or strewn across someone else’s floor. Hell, if they’re fluttering from the rooftops or are the only things you’re wearing while having a pillow fight, that’s fine. It is simply trying to introduce another type of advertising that doesn’t rely on the notion of pants as being something only seen in sexualized contexts. Shocker. In the same way that pyjamas can be Agent Provocateur suggestive or Night in with a Glass of Wine and a Good Book cosy, so pants can be shown in a range of situations.

Third and last, empathy. What seems missing from so many conversations (or, more accurately, these rounds of bitching and shouting confined to little text boxes on the internet) is an awareness that there is a person behind that avatar. Behind WMYP there is the brilliant Becky. Read any summary of why she set up the company, and you’ll see how deeply she cares about it. Instigated when she wanted to do something positive following time spent having counselling from the Rape Crisis team in Southampton, it’s a practical application of feminist principles. Creating a desirable product for those who can afford it, sustainably making use of factory offcuts and end-of-line fabrics, each pair of pants comes with a label saying who exactly in their factory made it. Each woman who works there is paid a fair wage, so giving them opportunities and independence they wouldn’t otherwise have.

And those feminists on twitter want to spend their time slagging that off? If they care about the ethics of fashion, why are they not writing to high street brands to ask about production line transparency? Why are they not using their twitter feed to highlight the work of organisations like Labour Behind the Label? Why are they not thinking, hmm, maybe I won’t tweet that because it’s actually quite hurtful and unkind and even though I don’t like WMYP I could use those 30 seconds to say something positive about another brand or initiative worthy of praise?

Because, I tell you, there are fashion villains out there. But Becky is one of the fucking superheroes.

4 thoughts on “Knickers in a Twist: The Hoo-Ha Over Who Made Your Pants”