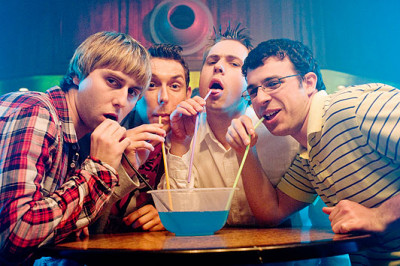 Oh, lads’ holidays. What a week of depravity, of filming strangers doing sex for a shot, sexist slogan tees and Lad Culture on speed, loutish DJs demanding ‘slut-drops’ and 18 year old girls being plied with booze. If you listen carefully, you can probably hear a tactical chunder somewhere in the distance. It is truly a microcosm of sexism in action. Filthy. No place for any self-respecting feminist.

Which I guess is why my friends all looked concerned – agog, even – when I told them I was heading to LADzarote with a group of five guys, with only my factor 20 and a staunch sense of self-righteousness to get me through. Even more agog when I mentioned I was leaving my lovely boyfriend at home while I frolicked off to the greasy shores of Puerto del Carmen. Nonetheless, I didn’t see any flaws in my plan. Even if I had, I was already well and truly wedged into my RyanAir seat, so I didn’t really have time to reconsider.

The week got off to a merry start: we bulk-bought beer and talked Game of Thrones on sun loungers.  As ever, my dudefriends and I got on famously, the fact that I was conspicuous vagina-owner barely warranting a thought.

They never singled me out for being a girl. Being crap at pool volleyball wasn’t because women can’t catch – it was because I was more interested in riding an inflatable crocodile than slapping a beach ball. Sucking at drinking games wasn’t because of my tiny lady liver, but because I find value in not waking up in a vomit puddle. Everyone promised not to go to a strip club. No one once asked me to make them a sandwich. So far, so feminist.

Being a woman did come into play, however, as soon as we ventured into the public. Fellow tourists, club promoters and waiters were all as agog as my family had been to find that I was voluntarily on holiday with a group of sunburnt men. Yet in some ways, life as a solo female tagging along with guys was a distinct advantage.

It was SO refreshing to dance the night away without once having my arse groped or being eyed up by some creep fellating his WKD. At no point did some macho in a vest try to convince me to go back to his hotel room for unprotected ‘fun’. I didn’t have to worry about our pitcher being spiked, and I didn’t have to worry about walking back to the villa in the dark. Being immersed in this group of hapless lads was actually something of a security blanket. And it wasn’t just the men acting as my personal shield. On several occasions, I’d be sat with the guys, in the beer garden of a particularly moist club, and some girl would swoop in on me like a drunk WonderWoman in a playsuit to ‘save’ me from the five psycho dudes who were clearing ‘sharking’ me. I felt very, very safe.

It became clear pretty quickly that young men and women are treated extremely differently on holiday. Of course we knew that – they’re treated differently on home shores, too – but I’d never really been in a situation where it was assumed my friends had all bagsied me for their own (deviant?) purposes. As the apparently “taken” female in clubs and on beaches, in others’ eyes I became someone else’s, or at best, in need of saving.

With this in mind, did I enjoy my time there? Was I uncomfortable with people assuming I was being picked up by five men at once? Though I can recognise the problem of clubs turning into cattlemarkets for young, scantily clad women, especially in light of the delightful Carnage escapades, I have to be honest: I loved it.

Perhaps this says something about how we’re willing to buy into negative cultures as long as it serves our own purpose (i.e. a grope-free dance). Or perhaps I’m a little addled from all the drunken explanations of objectification and pay equality. Either way, I had a great time with my mates, whether they were acting as a collective unwitting Superman or not. Turns out the greasy shores of Ladzarote had a certain charm after all.